As a lifelong educator, Jill Biden spoke of the importance of her profession and experience.

In this image from video, Jill Biden is joined by her husband, Democratic presidential candidate former Vice President Joe Biden, after speaking during the second night of the Democratic National Convention on Tuesday, Aug. 18, 2020.

In making her case at the Democratic National Convention Tuesday night as to why American voters should elect her husband Joe as the next U.S. president, Dr. Jill Biden spoke with care and conviction.

As a lifelong educator and established professional, Biden shared lessons and struggles of experience, both inside the Beltway and as a family. Delivered from an empty high school classroom in Delaware, where she once taught, the setting echoed her commitment to education and stood as a reminder of remote learning caused by the pandemic. “I know that if we entrust this nation to Joe, he will do for your family what he did for ours: bring us together and make us whole, carry us forward in our time of need, keep the promise of America for all of us,” Biden said.

Having served as second lady during President Obama’s two terms, Biden understands the reach of a worldwide stage. But her DNC remarks about unity, promise, education and family were not mere talking points, according to Sissy Dent Aerenson, a longtime family friend and the owner of Peter Kate, a Wilmington, Del., boutique. Describing Biden as “wonderful, smart, interesting, incredibly kind and humble,” Aerenson noted how she never stopped working during her tenure in Washington. “She is just really committed to her profession and education in general,” the retailer said. 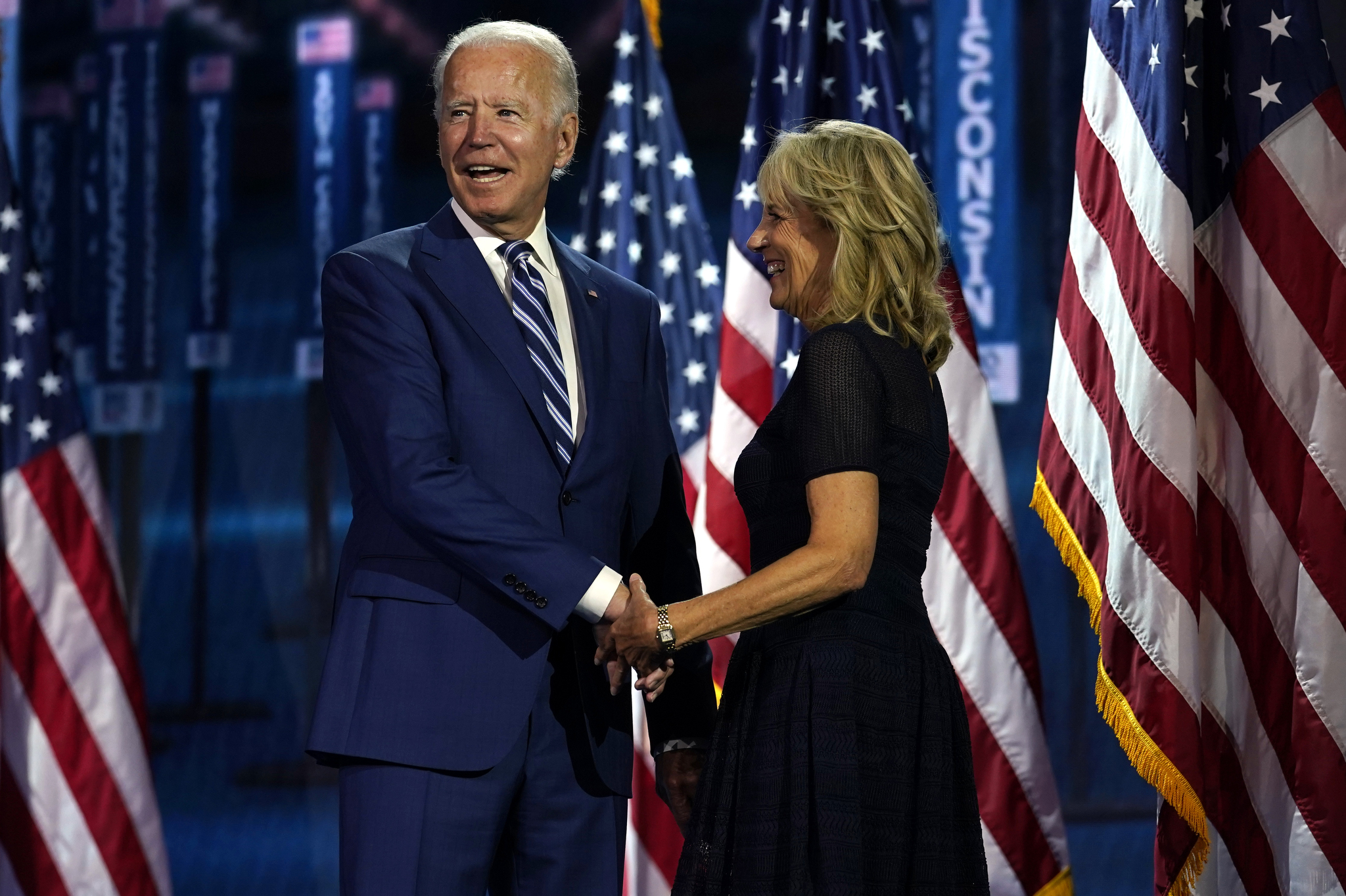 “She’s very much her own person. She’s not influenced by designers. She is much more influenced by the occasion and what she needs for her different events. She goes to so many different types of events,” Aerenson said. “She’s got a great sense of her own style. She’s very classic. She always looks appropriate, which I really admire. Because in today’s world, our modern fashion can be tricky sometimes.”

Her pragmatic side could be seen Tuesday night in the necklace she wore — a Peter Kate purchase that retails for less than $50. Having always been the kind of shopper who looks at price tags, she sometimes says, “‘Oh, maybe not today,’ like a lot of women do when they’re checking out or thinking about something,” Aerenson said.

Rather than stand by party lines and wear a hue of Democratic blue on Tuesday night, Biden sported a bright green Brandon Maxwell shirtdress. The designer declined comment Wednesday through a spokeswoman. Choosing green and that silhouette is just one example of how Biden approaches classic styles in a very modern way, Aerenson said.

The pearl necklace that the 69-year-old Biden wore Tuesday night reversed the traditional style with larger pearls at the center and descended with smaller ones. Biden wears the necklace all the time, according to the store owner. “Pearls are so classic, very Jackie O. Yet, these are more modern and funkier,” she said.

Aside from dealing with Jill Biden as a loyal shopper for nearly 19 years, Aerenson has known the Biden family for as long as she can remember. Her mother, Kathy Savage, grew up with Joe Biden and his sister Val. And Aerenson came of age with the former vice president’s children. “Wilmington is a small area so you tend to know people,” the retailer said. “That’s why the Bidens — all of them — have always been supportive of us, coming into our store. I’ve met the staffers over the years. It’s been a really fun and interesting experience.”

As the presumptive Democratic presidential nominee’s career advanced through the years, his wife’s shopping habits at Peter Kate have remained consistent. “Nothing has ever changed with Jill. Even after they left the White House, she is always someone who looks at a price tag, is careful about what she’s doing, thinks about it and asks prices,” Aerenson said.

Describing Joe Biden as very warm and “someone, who looks you in the eye,” Aerenson said his success comes down to being relatable. “He’s never wavered from that. So many can feel connected with him. That’s a gift.”

Buy local is not a new phenomenon for Jill Biden. Nearing her store’s 19-year anniversary, Aerenson said Biden has been a customer since the doors opened. “She’s been a very loyal customer and has always been very supportive of Delaware and small business. That’s always been appreciated. That’s what the Bidens are known for.”

Three of the blouses — a lilac Vince one, a navy Zadig & Voltaire style and a peachy L’Agence choice — that Biden was seen wearing in the introductory video that aired during Tuesday’s convention were purchased at Peter Kate. Veronica Beard jackets in green and black are two on-the-road staples for Biden, who switches them up by wearing them with dickies, false shirtfronts and subsequently simplifies packing, according to Aerenson.

As “a frequent shopper” who might stop by twice a week during the holiday season, Biden is routinely approached by others in the store, the owner said. Although she does not typically initiate conversations about issues affecting the country, she often engages with shoppers. “Jill’s a class act. She doesn’t come in and bring what’s going on. If you want to ask her, she’s great about responding,” Aerenson said. “In my store, I’ve noticed that people will approach her. She always listens patiently, when people talk to her or tell her their story. Whatever it is, she takes the time to listen and to reflect back about what they said.”

Instead of shopping to focus on herself or a gift that she might be looking for, Biden is always “very respectful and kind with her time to others,” Aerenson said.

During the Obama administration’s terms, Biden attended her share of formal events and has the dresses to prove it. That said, playing favorites is not her thing, according to Aerenson. “Jill doesn’t seem to be beholden to designers. She’s someone with her own sense of style and look. She gravitates toward pieces that speak to that, which is so refreshing. She doesn’t come in and say, ‘Oh my God — the L’Agence blouse that you gave me last time — I want another one of those,’” adding that brand names do not impact her buying decisions.

When the pandemic hit, the retailer said she did not speak with Biden about basic business concerns. Like thousands of other independent boutiques during the shutdown, Peter Kate operated via local deliveries and shipping. “At that point, it was just if she needed something for gift-giving. A lot of that was by text so we didn’t really discuss,” Aerenson said. 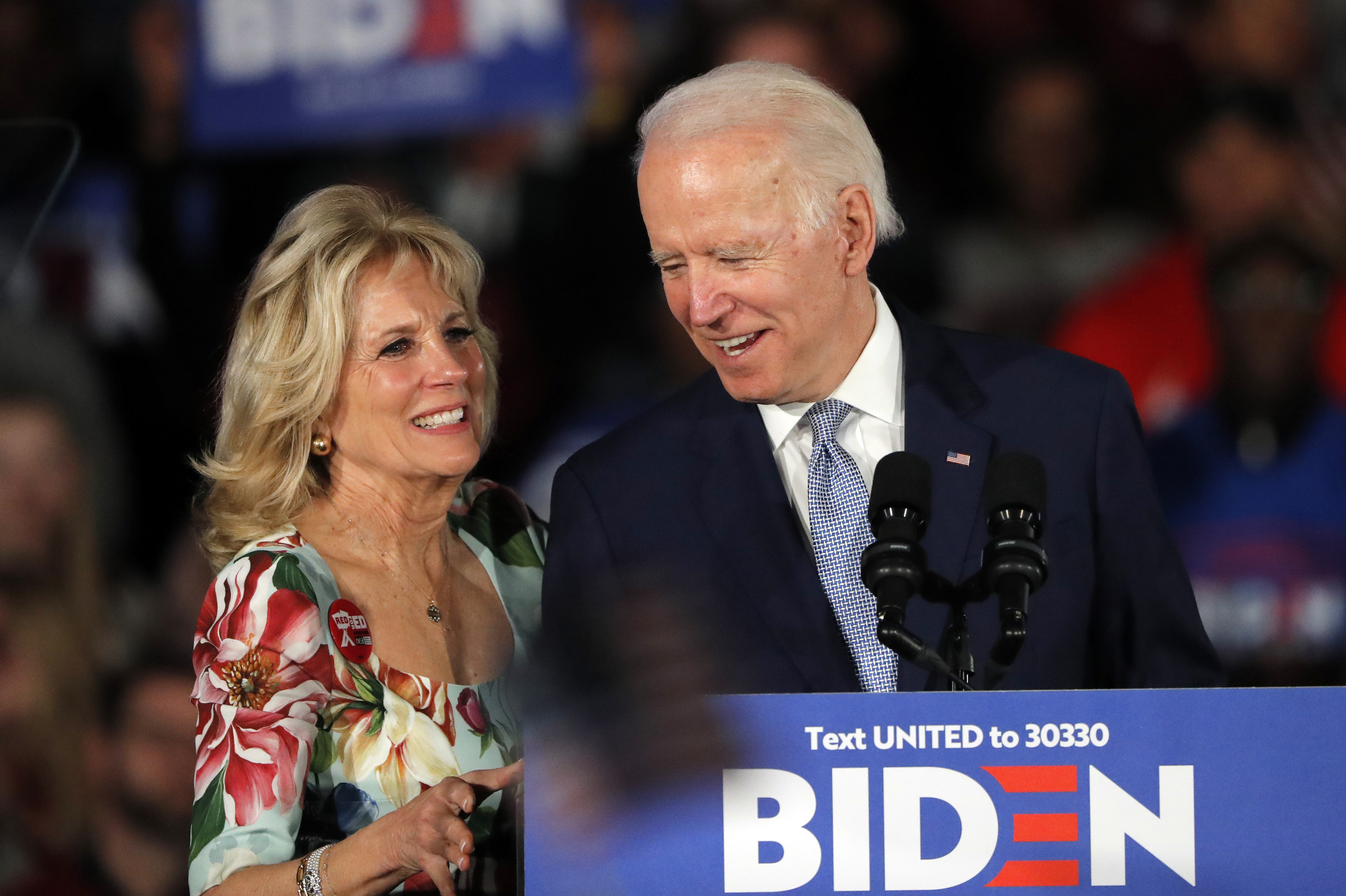 Skewing toward classic styles appeals to Biden. “If I had a grunge store or a super young one, she wouldn’t be buying as much from me,” she said, adding that having a multigenerational store enables Biden to shop for her granddaughters as well.

Some of Tuesday’s DNC viewers learned for the first time that Biden is a runner. The getting-to-know-you video featured clips of her competing in marathons and more recent footage of her running in a white sleeveless T-shirt and black leggings. Having seen her running at the beach, where they stay in the same neighborhood, Aerenson  said, “She is a runner and she stuck to it. I’m amazed because I can’t run any more. My knees hurt and I’m younger.”

Biden’s modern spirit is partially due to her granddaughters (one of whom referenced her penchant for dragging them to a crack-of-dawn SoulCycle class on Christmas Eve). “Grandchildren keep you young in many ways. That’s an important piece of it. They’re very much a part of her life,” Aerenson said.