Joan Allen likes to get to the theater early. For an 8 p.m. show, a car picks her up from her Upper West Side residence at a quarter to six to take her down to the John Golden Theatre, ensuring she’ll have plenty of time to prepare for her entrance onstage in playwright Kenneth Lonergan’s “The Waverly Gallery.”

“I’m not in the first two scenes, so I sit in my dressing room, and we have an intercom so we hear the show in our dressing rooms,” says Allen over a cup of tea at a bustling diner near her apartment. The play, which stars Lucas Hedges and Elaine May, revolves around a grandson watching his grandmother descend deeper into Alzheimer’s; Allen is the mother in the family dynamic.

“I listen to that first scene every night, and I hear the interplay between Lucas and Elaine. It’s so sweet and fresh, and that helps me, kind of eases me into when I come in.”

Despite the personal nature of the specific story — which is in fact Lonergan’s family story as he was that grandson — the show is overwhelmingly relatable, and the crowd’s reaction is palpable, even from onstage.

“It really has a universal feeling to it. And everybody ages, everybody gets old at some point,” she says. “When I leave the theater there are so many people — we don’t get a huge crowd, but people definitely waiting afterward — saying, ‘I’ve lived this, I am living this, I’m watching my own mother go through this with her mother.’ It’s pretty pervasive,” she says.

It’s a story that Allen is also intimately familiar with, having dealt with her own mother’s dementia.

“I was asked to meet with Kenny and Lila [Neugebauer, the play’s director] last May. I had an hour-and-a-half coffee with them and I had read the play, and I did have a moment of going, ‘I’ve lived through this, I don’t know if I want to do this onstage.’ And then I thought about it some more and I thought, well, this isn’t exactly my mother’s experience, and in the play, we’re fighting against the problems, trying to keep marching forward.”

In addition to being a longtime fan of May’s (“I had been a big admirer of her and Mike Nichols’ routines in my 20s; at the Steppenwolf Theatre in Chicago we idolized them and listened to their routines on a record player,” she says), Allen’s participation in the show also has a certain air of kismet. A longtime friend of Lucas’ father, Peter Hedges, Allen has photos of herself holding the older Hedges son, Simon, when he was a baby.

“It just seemed to have all of these constellations that connected,” Allen adds. “Peter came and his wife Susan came — and I hadn’t seen him in years — and they were there opening night. They say they come every two weeks to see Lucas in the show.”

The production opened on Oct. 25 and will close — no extensions — Jan. 27. Between previews and closing, Allen notes that they will have performed the show roughly 160 times.

“I personally love that we are having a limited run,” says Allen. “I think I’ll be ready. And because of that, though, it makes each performance even more precious,” she continues. “I always say to myself, I’m in rehearsal until Jan. 27. I see performance really in some ways as a rehearsal, and it’s like, let’s just keep working, keep exploring and keep discovering. I just want to stay open and fresh and learning until the end.”

Despite the subject matter, the play maintains a lightness, buoyed by May’s deep ties to comedy and improv. Allen notes that the play is constantly evolving and calibrating as the five-person cast (which includes Michael Cera and David Cormer) continues to explore the dynamics of the family and play off of each other — just like any other family.

“I find it sort of hopeful in a kind of melancholy way,” says Allen of the production. “Because it’s life, it’s aging, it’s illnesses that happen, how families deal with them. So it doesn’t really bring me down too much. And there’s a lot of humor.” 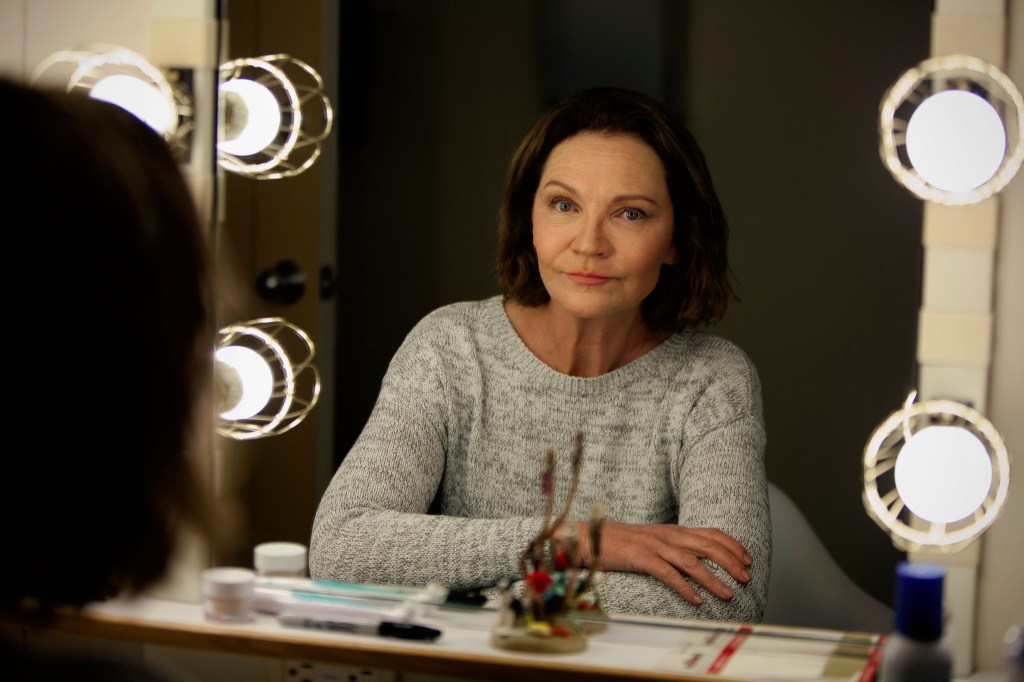 Joan Allen in her dressing room.

In ‘Vox Lux,’ Director Brady Corbet Subverts the Tropes of a Moral Tale