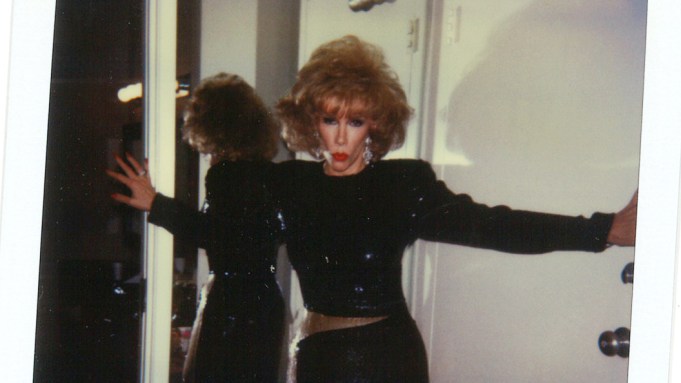 For more than half a century, Joan Rivers’ razor-sharp wit served as a pop-cultural commentary on everything from Watergate to the Kardashians.

When she died suddenly in 2014, the comedian left behind boxes and boxes of ephemera from her tireless career. From joke cards and contracts to personal letters from pals like Nancy Reagan and Prince Charles, Rivers’ mountain of memorabilia was mostly sealed and largely unseen for decades — until now.

“My parents were fastidious in keeping accurate records across the board with everything,” Melissa Rivers, the comedian’s daughter, says on the phone from her home in California. “Because of her drive to always be fresh, she kept records of every appearance, every performance, all the jokes that were used on TV, all the clothes that were worn.”

Rivers teamed up with publicist Scott Currie, a close friend of mother and daughter, to artfully assemble and edit the late comedian’s vast archive in “Joan Rivers Confidential,” a coffee-table book available Oct. 24 from Abrams.

For Rivers, fashion was often part of the act. Alongside jokes (“My dress is by Oscar de la Renta, my body is by Oscar Meyer”) the pictorial journey in “Confidential” includes many never-before-seen Polaroids of Rivers in shoulder pads and sequins ahead of appearances on “The Tonight Show” in the Eighties. Names including Calvin Klein and Victor Costa are scrawled alongside the show’s air date.

“Joan really had a passion and feeling for clothes,” recalls Klein. “I enjoyed the times I spent with her where she always tried to bring humor and lightness to fashion.”

“It was always about the look,” said Currie. “It was really her moment to show off new designers. Suddenly so many options came into her life and she really had fun with it.”

The Anchor Communications founder met Rivers while working as a producer on her eponymous daytime talk show in the early Nineties, but Rivers quickly became “like a mother figure” to him.

River’s memento-filled Manhattan office sits mostly as she left it, standing as a tangible tribute to an impressive career. “She never stopped working,” mused Currie, pulling from a cabinet a dog-eared date book scribbled extensively with pencil. “Every hour was filled.”

Currie leans against a steel cabinet with peeling labels including “celebrity cars,” “growing older” and “Melissa’s dates.” This master library houses Rivers’ meticulously organized joke files, many of which are scattered throughout “Confidential.”

From her early days on television to nightclub appearances in Las Vegas and later as a red-carpet fixture, Rivers’ brash persona was often linked to what she wore. Michael Kors notes, “Stylish and hilarious are not normally two words used to describe the same person. Joan genuinely loved beautiful things and understood quality, but knew how to make fun of herself. She was the ultimate in self-deprecating chic.”

“When my mother became the permanent guest host of ‘The Tonight Show’ [during the Johnny Carson era], she really took the opportunity to indulge in fashion,” Rivers relates. “They found out it became a big part of why women were tuning in.”

But the 300-page graphic tome goes beyond Rivers’ love for clothes and illustrates the highs and lows of her 81-year life. The only daughter of the funny lady and producer Edgar Rosenberg describes the journey into her family’s archives as an “emotional roller coaster.”

“The first half of the book, Scott and I felt like archeologists, but it was also having to relive, expose and share parts of what was happening in my life. When we came to the [failed] Fox show and my father’s suicide, it was very difficult for me,” Melissa said.

Painful memories aside, Rivers was committed to properly narrating her mother’s life through varied trove of memorabilia. “When I first got my finished copy, I started to cry because I couldn’t believe how beautiful it was,” she reveals.

“It’s really a pop-culture history and social commentary about what everybody was talking about and laughing about at that time — down to the language that was being used from the Fifties until [her death in] 2014,” she adds.

But what would Joan think of seeing her life bound in glossy hardcover?

“She would roll her eyes,” opines Rivers. “Then she’d be annoyed that we put in pictures that existed before full retouching. But once she got past that, I think she’d love it.”

Dancing the Night Away at the American Ballet Theatre Gala