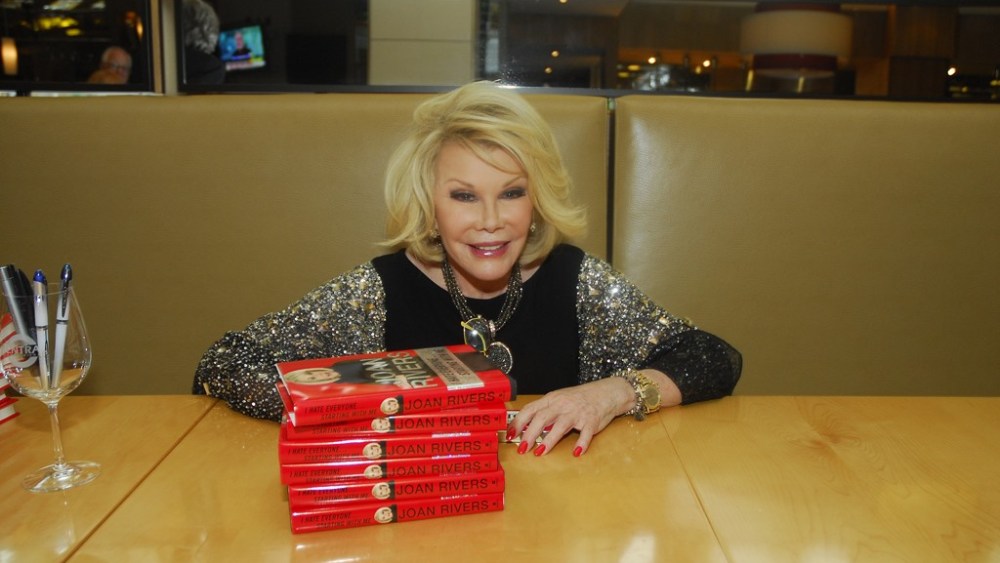 WASHINGTON, D.C. — Joan Rivers wowed the crowd Monday night at a sold-out talk at the capital’s hot new lecture venue, Sixth and I, the restored 100-year-old synagogue a block north of Friendship Gate in Chinatown.

She took the chance to comment on her own hopefully healing friendship with former friend and fellow comedienne Carol Burnett. During the question-and-answer session about her new book, “I Hate Everyone…Starting with Me,” (Berkley Books), a fan asked Rivers about the spat caught on video in February on the “Joan and Melissa — Joan Rivers Knows Best” show. Still viewable online, the segment captures a seething Burnett as she bolts from her restaurant table when Rivers sits down to say hello. Offering a one-word explanation — “Hawaii” — Burnett calls back over her shoulder to her male companion to “pick up the check,” and storms out.

Rivers told fans she was shocked when Burnett fled the restaurant, but pledged that all has been forgiven. “It was 30 years ago. We were in Hawaii and she got stung by one of those things — what do you call them, a jellyfish? Like it’s my fault that there are jellyfish in the ocean. But we’ve made up. We’ve made up,” she insisted. Rivers’ daughter Melissa has explained that the two families were on vacation together in Hawaii when her mother pushed Burnett into the ocean and never apologized.

Rivers also gave credit to her friend, interior designer Robert Higdon, for her current friendship with Prince Charles. “I was one of only four Americans invited to the royal wedding,” she told the crowd. “And I am friends with the man who used to run his foundation.”

Higdon, who in September left his job as executive director of the Prince of Wales Foundation, has gone pro with his private passion: interior design. He confided he’s “doing Melissa’s New York East Side apartment,” along with designing for his newest client — actress Lynda Carter of “Wonder Woman” fame.

At Higdon’s pre-lecture cocktail party at Central, Michel Richard’s Pennsylvania Avenue restaurant, cohosted with David Deckelbaum, Rivers got her own dose of high-stakes sparkle when D.C. socialite Buffy Cafritz lined up to have her book signed. As Cafritz explained that she wanted the book signed to her granddaughter, Rivers was unable to take her eyes off Cafritz’s knuckle-sized, tear-drop diamond ring.

“I took a wrong turn somewhere,” she said, shaking her head in disbelief. “Every woman showed up today with a big ring. They’ve all come to mock me.”

As for her own flashy, diamondlike pendant, she said, “I’ll be showing it in the new collection,” referring to her regular QVC jewelry gig. “I try to test drive everything I can.”