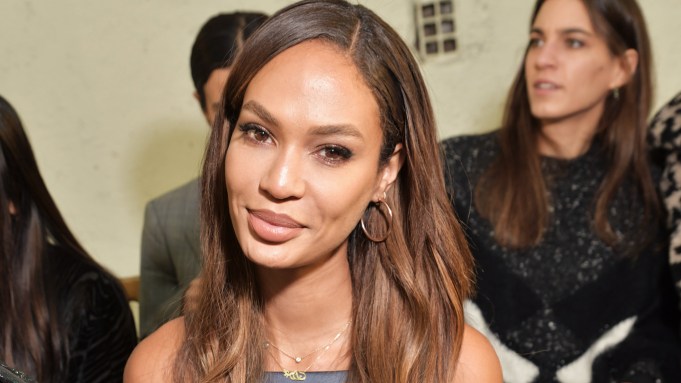 ON THE GO: Joan Smalls is prepping for fashion month. “This is kind of like the kick-start to it after the holidays, for the long run,” she said at the Elie Saab show Wednesday afternoon, where she sat front row along with faces including Sonam Kapoor, Larsen Thompson and Nieves Álvarez.

Smalls was feeling invigorated by her recent vacation to Kenya, her first trip to the country. “I’ve been to Africa before but not to Kenya, and it was so breathtaking to see the colors and nature and be completely unplugged from social media and all that, it was really refreshing,” she said.

Sitting next to her, Molly Sims has been multitasking lately. “I’m writing a third book. I just finished a movie in L.A. I did a pilot. I’m about to do a podcast. I have three very small children…so I have a lot going on,” she listed.

“It’s all about reinvention,” she said of her book project. “I love beauty and fashion on the outside, but taking care of the inside, that’s important.”

The actress and model was enjoying being back in Paris. “I love L.A. so much, but I spent seven years living here and this inspires me. I miss fashion, living in L.A.”

Chatting away further down the front row, Audrey Dana and Marina Hands have just wrapped “Men on the Verge of a Nervous Breakdown,” in which Dana directed Hands in the leading role.

The French movie is due out in August. “It’s about seven men at the end of their tether who go on a sort of retreat that’s supposed to get them back on their feet,” Dana explained.

Next week, Hands starts shooting season two of acclaimed dark comedy “Mythomaniac,” in which she plays a bored housewife who tells her family she has cancer to garner attention, a lie that rapidly spirals out of control.

“It’s even more extreme than season one, it’s surprising,” Hands said. “People are writing better and better roles for women, which is fantastic,” she enthused.