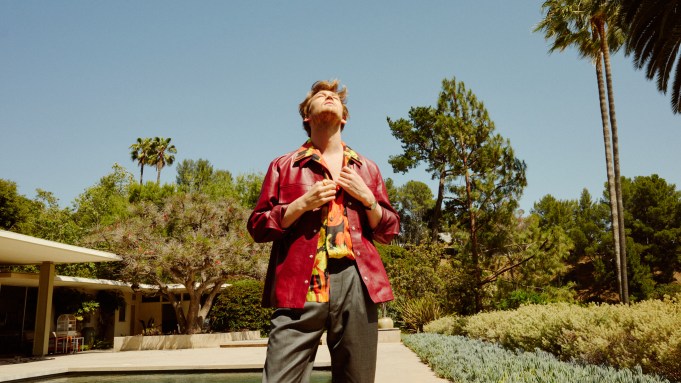 “A little bit upside down” is how Joe Alwyn describes his current state, a familiar sensation to anyone who has experienced the London to Los Angeles jet lag he’s currently under but less a familiar feeling if you haven’t been the star of a hotly anticipated series which dropped only hours before.

It’s the good kind of upside down, though. “Everything is good,” Alwyn says. “The sun is shining and that’s more than you get in London, so…”

It’s the morning after his most mass-appealing project to date dropped on Hulu — the TV adaptation of Sally Rooney’s first novel “Conversations With Friends,” whose arrival has been awaited ever since the platform’s version of her second book, “Normal People,” nearly broke the internet, as they say, back in 2020. Irish young adults coming of age and discovering love had never been so tantalizing to the millions of people who consumed the show, discussed it online and dedicated Instagram accounts to characters’ jewelry.

Alwyn, for his part, has talked with his parents, who have just begun to watch the show but largely avoided any stir online from viewers.

You know Alwyn from Ang Lee’s “Billy Lynn’s Long Halftime Walk,” which he landed a mere two weeks after his graduation from Royal Central School of Speech and Drama, as well as Yorgos Lanthimos’ “The Favourite” — serious films with awards glommed on helmed by some of the most respected directors of today. Yet it’s been a strange breakout burn for Alwyn over the years, as you also know him from paparazzi photos with Taylor Swift, with whom who he’s been in a well-protected and private relationship for more than five years.

In the age of the Instagram overshare, Alwyn feels like a callback to actors before him who have achieved A-list status while remaining completely uninterested in indulging the public in their personal lives. Spending time with him, it’s hard to picture Alwyn at the center of the attention circus that comes with a mega star the level of Swift; on the contrary, he’s very unassuming, extremely chill and laid-back. He arrives to his photo shoot unaccompanied and five minutes early, dressed casually in a navy T-shirt and dark green pants, a Patek Philippe on his wrist and Wayfarers in hand. It’s clear that fame is of little interest to Alwyn, but even after seeing the instant rise of “Normal People” actors Paul Mescal and Daisy Edgar-Jones, he wasn’t deterred from doing the Rooney series.

“No, it’s not a deterrent. I mean, it’s nice to be a part of something that hopefully people care about and want to see. Particularly with Sally Rooney as a book that meant a lot to a lot of people,” he says. “And so there are nerves that come with that, but also it feels like a privilege to be involved in something like that, whether you like it or not. And so I feel lucky to be in something like that. I mean, you make anything and you just don’t know what will happen on the other end. So you kind of try not to think about that too much and just try and kind of enjoy the making bit and go from there.”

The 31-year-old actor is a fan of Rooney’s writing and says he’s able to relate to his character Nick in ways that helped him bring him to life.

“He’s someone probably who can overthink and I can overthink. He struggles with communication a lot more than me, but I can relate. I think we all can, to parts of that,” Alwyn says. “He’s an actor and I can relate to the weirdness and there’s kind of ups and downs to that.”

Nick also struggles with depression in the show, and Alwyn points to those “ups and downs” as something he understands as well.

“All of that with a slight pinch of salt, or not to the same degree as them, which that’s one of the fun bits of playing someone,” he says. “You find the similarities and the differences and you kind of home in on what’s similar and you make up the differences elsewhere.”

Alwyn doesn’t recall a lightbulb moment of wanting to be an actor, but grew up on a healthy diet of films from his father, a documentarian, and trips to the theater with his mother, who is a therapist.

“Every birthday or something [my dad] gave me a bunch of videos essentially, which I’d watch, or I’d go to the theater here and there with my mom. I mean, it was very much through them [that I found acting],” he says. “But it wasn’t like I got to go on sets and stuff like that. That wasn’t the kind of films that he made, but it was just like a love of film.”

Alwyn spent the rest of his week in Los Angeles in full “Conversations” mode, attending the film’s screening in a Jil Sander suit, joining his costars at Elle’s Young Hollywood party and having dinner at new hot spot Mother Wolf. He then shifted into film mode as he headed to Cannes with his next release, the new Claire Denis movie “The Stars at Noon.” Alwyn replaced Robert Pattinson in the project, which is a romantic drama base on the Denis Johnson novel of the same name, costarring Margaret Qualley. He’s yet to see the film but working with the legendary Denis was what steered him to the project, he explains of his career approach.

Upcoming still is the Lena Dunham-written and -directed “Catherine, Called Birdy,” which will debut in the fall, as well as a modern film adaptation of “Hamlet” with Riz Ahmed.

He lists Philip Seymour-Hoffman as an inspiration, but doesn’t have an actor whose career he’s exactly hoping to imitate. Similarly, he can’t quite name a dream next project, only to say it would be a long list of directors’ names, which would be “pretty boring to do.”

“Maybe I should have more of a game plan than I do,” he says with a laugh.

He remains open to most anything: “When the ingredients are right for anything, I think it could be interesting.”

Favorite summertime film: “Call Me By Your Name”

Favorite summer song: “I can’t think of a specific song, but I can hear the sound of it, just being in a park with friends having some drinks.”

Favorite summer holiday you ever went on: “I remember being a kid and going to the South of France a couple of times with my family and just the heat there, and then being in a foreign supermarket there, and just the weird visceral amazingness of being abroad when you were a kid. I remember loving that.”

What’s your sense of style?: “My sense of style? Oh god. I tend to just find things that I like and wear. And just wear them probably too much until they fall off me, and then find something new to wear. I do that more than find a brand new pair of trainers every week. I like having good, solid, nice things that last.”

Who is your style icon?: “I do not have a style icon, but maybe I’ll find one this summer. I mean, back in the day, I guess you see pictures of the James Deans and whatnot, and they did it all right.”