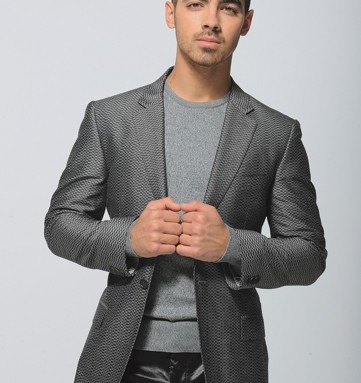 Joe Jonas, who will be front and center at Calvin Klein Collection’s men’s show in Milan on Sunday, has plenty to be excited about this summer. After the Milan shows, the pop star will embark on a six-city European tour to promote his first solo single, “See No More.” “It’s off to the races. I’ll be starting in Milan and heading to every major city,” said Jonas, 21, who modeled looks from Calvin’s spring line on Tuesday at Hollywood’s Milk Studios. Calvin Klein Collection men’s creative director Italo Zucchelli described the line as “colorful, clean American sportswear with a modern take on proportions, color and texture. It features interesting new volumes and shapes.” Meanwhile, Jonas describes his new album, “Fast Life,” out Sept. 6, as a departure from the Jonas Brothers sound. “I wanted to take my existing fans on a musical journey to show the sounds I love, from Latin to hip-hop,” he said. While Jonas said he and his brothers, Nick and Kevin, are giving their band a break for now, he adds, “You can’t break up brothers, so you can expect more music from us.”