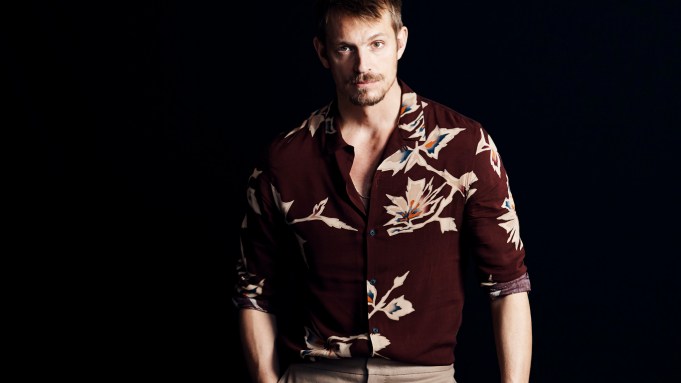 Joel Kinnaman pulls up a photo on his phone of intricately wrapped gifts, one of the perks of a worldwide press tour. His bounty from Seoul — where he’d visited after Los Angeles and before Sweden, Paris, and now New York — included locket necklaces for himself and his wife, tattoo artist Cleo Wattenström. Kinnaman, who’s on the final leg of a press tour for Netflix’s big-budget sci-fi series “Altered Carbon,” was clearly charmed by the gesture.

“I’ve adjusted pretty well to each [time zone],” says the low-key, Sweden-born actor of the temporal bouncing around. “The key is to not to go out and get f–ked up, then it’s a wrap. So if you eat good and go train, then it’s easier.”

Training has been a large part of the 38-year-old Kinnaman’s regimen and significant backbone of his preparation for his film and television roles, which have often fallen within the action genre. For the futuristic “Altered Carbon,” he trained three to five hours a day over six months to get into the role of Takeshi Kovacs.

“Really grinding out different martial arts and strength and conditioning,” says Kinnaman, dressed in a look he coined “Swedo” in style (a riff on “Guido”). “I wanted to be prepared in a way where I could do my own stunts. It was the first time that I really stepped up to that level.”

The show, which has been described as “cyber punk noir,” was adapted from the 2002 novel by Richard Morgan and draws comparisons to “Blade Runner: 2049.” Kinnaman wasn’t initially interested in doing another TV show — “I’d just come off of ‘House of Cards,’ and I was also a little hesitant doing a sci-fi show on TV,” he recalls — but was won over by the massive scale of the project.

“There were more impressive sets on [the show] than I’ve ever seen in my whole career, way beyond ‘RoboCop’ and ‘Suicide Squad,'” Kinnaman says. “We had a set that was three football fields deep, with a whole living, breathing city — like three stories of bridges going back and forth, about 450 extras in the most odd clothes walking around and construction workers. You had noodle shops with people eating, tattoo parlors and street vendors, people digging a hole in the ground. Construction workers, police officers making an arrest. And they could shoot in any direction.”

The show carries an R-rating, reflecting its cinematic ambitions, which include plenty of stunt and CGI work packed into the murder-mystery storyline. “It’s central to the story that there is violence, because part of the violence is to show that the human body is now disposable. And now because of this new technology, we have a very different relationship to bodily damage and pain,” Kinnaman offers. In the flashy-tech world of “Altered Carbon,” the individual self exists separately from the body as “cortical stacks” — which store consciousness — and can be inserted into new bodies, called “sleeves,” when the previous body dies.

As an actor, it’s a familiar notion for Kinnaman.

“There is something that is really similar to what we do. You try to make your body into this different personality,” he says. “A real easy tool to do when you’re finding a role is to change how your body is because you operate a different way in the world. I notice when I’m skinnier.…I relate to other men in a different way, and I feel a little younger and a little more ‘squirrl-y.’ And then when I’m heavier, I have a different posture. Those little differences, those are the ones that ignite the idea of what the character can be, and then you start exaggerating them and shaping them.”

The actor will next appear in the crime-thriller “Three Seconds” along with Clive Owen and Rosamund Pike, and he’s gearing up to start shooting another miniseries in Budapest. The “Suicide Squad” sequel is also hovering on the horizon.

“They’re still working on the script on that, so they haven’t set a start date yet. But I know [director and writer] Gavin O’Connor and Warner Bros. are hammering away, and so that’s still pending,” he says.

While a big-budget franchise film carries many perks, Kinnaman seems genuinely amped to step back into the body of Rick Flag.

“It’s a really good feeling. At first if there’s something that you didn’t like with your performance, then you can sort of adjust it. You also get this deepening fleeing that sort of marinated in you,” he says. “So I’m really excited to go back to the Suicide Squad. Actually, I have a bone to pick. I feel like I have a lot of thoughts on how I want [Rick Flag] to evolve. I look forward to getting into him.”

While Kinnaman jokes about looking for a role outside of the action “muscle guy” genre to get back a little credibility, he follows up with quick — and genuine — gratitude.

“I’m not complaining in any way. Honestly, I’m so thrilled that this is my life. I could never have imagined when I dropped out of high school — I didn’t imagine my life going in this way,” he says. “Of course I’m incredibly happy, but at the same time you have to keep raising the bar. And I think it’s really important to never get too comfortable. I think it’s really important to live your life 10 percent out of your comfort zone, keep challenging yourself and keep giving yourself difficult things to solve. That’s the way that you don’t stagnate.”