Led Zeppelin's John Paul Jones performs Thursday night at the opening of "Merce at 90" at the Brooklyn Academy of Music. 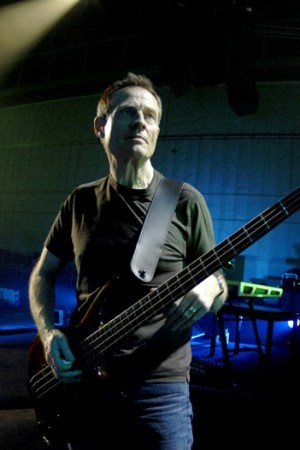 Merce Cunningham, whose innovative choreography has enthralled balletomanes for more than 50 years, is equally as famous for his collaborations. In the past, the 89-year-old has invited artists like Robert Rauschenberg and rock bands Radiohead and Sigur Rós to contribute visual and audio elements to his experimental dances. This spring, former Led Zeppelin bassist John Paul Jones will perform with Sonic Youth and Takehisa Kosugi during “Nearly 90,” which opens Thursday at the Brooklyn Academy of Music.

Having composed for Cunningham in 2005, Jones is familiar with his creative process, in which everyone involved in the ballet — choreographer, musician, set designer — works independently. “Nobody is aware of what’s going to happen until you actually do it — which is just such fun, apart from everything else,” Jones says. “When the curtain comes up, you start playing; when it comes down, you stop. That sounds like my kind of show.”

Jones, who recently has been producing records for up-and-comers, as well as performing with other artists such as Ben Harper and the Foo Fighters, spoke with WWD a few weeks before the premiere.

WWD: The idea of composing for a ballet without ever having discussed it with your fellow musicians or the dancers sounds a little nerve-racking.
John Paul Jones: Well, yeah, but a little bit of nerve-racking is not so bad. Keeps you on your toes. You have to trust that it’s going to work, and that’s where Merce comes in. He puts it together so that it will work.

WWD: What is unique about composing for him?
J.P.J.: Obviously, composing for Merce is different because you don’t actually work with the dancers. They kind of dance with your music, they don’t dance to it. It’s amazing how much synchronicity or nonsynchronicity goes on but that it still works. I mean, you can be playing fast and they’ll be dancing fast, and then you’ll stop and they’ll still be dancing, and you just hear feet. Or you’ll be playing fast and they’ll be dancing slow. It’s just…it’s very exciting.

WWD: Have you started working on the music?
J.P.J.: I have the piece mapped out, the actual sonic part. It’s a bit sound-scapey. I’ve got what I call my little [roll the] dice button. I press a foot switch while I’m playing, and it will scramble the sound, and so it may send it off somewhere else. And I just have to kind of react. I think it’s in keeping with the whole affair. Might be a bit more nerve-racking. Or foolish. I like to think it’s noble.

WWD: So you have no discussion prior to the performance with the other musicians you’re playing with?
J.P.J.: No, it’s not too often you can do that. It’s basically what music-making’s about.

WWD: What are you working on next?
J.P.J.: I’ve got an album that I produced for an artist called Sara Watkins, who used to be with Nickel Creek. And I’m working on some other music, which is more rock based, with a couple of other people. We hope to be everywhere this summer.

WWD: With whom?
J.P.J.: It’s a secret, actually. I shouldn’t have even said that, you know? There are some exciting projects coming up, let’s put it that way.

WWD: Fair enough. So Merce is still choreographing at 90. Will you still be playing music at that age?
J.P.J.: If I can, I will. What are you going to do, you know? I can’t do anything else, really. And it’s good fun. Meet interesting people and play music. What more could you want?