Jordan Davis Breaks Out From the Crowd in Country Music

The "Slow Dance in a Parking Lot" singer is releasing new album, "Buy Dirt," that features a duet with Luke Bryan.

There are quite a few new male artists working hard to make their mark in country music, but one has managed to break through: Jordan Davis.

Since releasing “Singles You Up” in the middle of 2017, the 33-year-old Louisiana native has become a fan and radio favorite, amassing more than two billion streams worldwide and notching three consecutive number-one singles: “Slow Dance in a Parking Lot,” “Take It From Me” and “Singles You Up.” He won Best New Country Artist at the iHeartRadio Music Awards in 2019 and was a nominee for the Academy of Country Music’s New Male Artist of the Year in 2020.

Today he releases his second album, an eight-song EP featuring “Almost Maybes,” his current single that has cracked the top 10. The album also features a duet with Luke Bryan on the title track, “Buy Dirt.”

“We had met four or five years ago, we’re on the same label, and we had met at an after-party,” Davis says of Bryan. “But it was after a golf round one day I got to sit down and talk to him about anything but music. A lot of people know Luke as the “American Idol” guy and the country music star, but Luke really is a great dude, a great dad, a great husband and that’s what I wanted ‘Buy Dirt’ to embody.”

The lyrics of the song are about focusing on what matters most in life — find the one you can’t live without, do what you love but call it work, send some prayers up and your roots down deep. You can’t buy happiness, but you can buy dirt — lessons that were driven home to him during the pandemic. 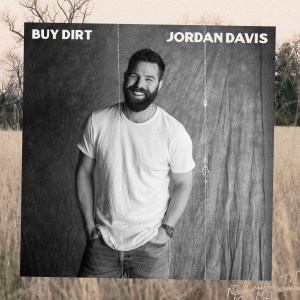 “Buy Dirt” is the title of Jordan Davis’s newest album.

“My career went away and a lot of things were up in the air, but the one thing that was constant through the whole thing was my family, my friends, my faith,” he says. “And I just thought Luke would really resonate with that.”

Although Davis didn’t win the golf tournament — “Luke definitely beat me that day, in fact, I don’t think there was anybody on that course who didn’t beat me that day. It’s safe to say that I’m pretty good at a couple of other sports, but golf is not one of them” — it did result in a duet that will undoubtedly be the next single off the album.

Davis has had success with collaborations in the past, including “Cool Anymore” with pop singer Julia Michaels. “I’ve been a fan of her songwriting for a long time and, right after I met her, I knew if there’s ever a chance to do something together, I want to make that happen. Thankfully, Julia was all in.”

Also a strong contender to be a single from “Buy Dirt” is “Need to Not,” a song about how a guy knows it’s wrong to slip back into an old relationship, but just can’t help himself.

Davis released that song not long ago and the reaction from fans has been encouraging. “We played our first couple of shows a few weekends ago and to see that reaction, we just haven’t had that in so long. We’re used to going out and working a song live a little bit and watching the fans catch up to it. But now, it’s been so long since being on stage that we’re going out and they already know these songs. So it’s a pretty neat spot to be in.”

So is being onstage. Although Davis hasn’t played a full band show yet, he’s started to return to playing live with a “stripped-down acoustic” show. “It was really cool to get back to just guitars and cocktail [drum] kits and get our feet back under us.” During the pandemic, Davis used Zoom and social media to keep his music top of mind. And although he admitted it was hard to “bring full-show energy to a recorded set of music,” it was a way to stay connected to his fans.

Using music to reach people has been a goal of Davis’ since he was young. His family has a history in music — an uncle is a successful songwriter and his brother is also a country artist — but Davis also made sure to have a backup plan in case it didn’t work out. He graduated from Louisiana State University with a degree in environmental science before taking the leap to Nashville to seek his big break.

“Music is something I’ve always loved, it was just about me getting the courage to move to Nashville and chase it,” he says. “At the time I was single and I said, ‘I’m going to kick myself if I don’t move to Nashville and just give it a shot.’ What’s two or three years? At least I can say at the end of it: I gave it a chance and it didn’t work out and I have this degree that I’m passionate about and I can come back and be happy there as well.”

But it did work out when he signed with Universal Music Group in 2016. Davis has skills as both a singer and songwriter. He actually cowrote every cut on “Buy Dirt” except the first song: “Blow Up Your TV” by John Prine. Although they’d never met, Prine was a big influence on Davis growing up and is one of his favorite songwriters. “I was probably 10 years old the first time I heard a John Prine song and I haven’t stopped listening to him since. Unfortunately, we lost John during the pandemic and this was my way to say ‘thank you’ to him for the role he played in my music career. It’s one of my favorite songs of his and I thought it would be a good way to kick off this EP that means a lot to me.”

Songwriting continues to be close to Davis’ heart and although he also likes performing, if he had to choose, he’d probably pick writing over singing, he says. “There’s nothing like going in a room with some of your best friends with absolutely nothing, talking for an hour and then leaving a couple hours later with a song. But getting on stage and singing those songs and watching it connect and have fans sing it back to you is also pretty special as well.”

This fall, Davis will be able to indulge his love of the spotlight by going on the road with Kane Brown on his “Blessed and Free Tour.” In the past, he’s toured with Old Dominion, Brett Young, Jake Owens and others. 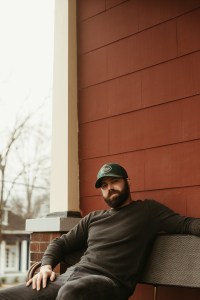 This time, however, he’ll be leaving a full house. He and his wife Kristen have an 18-month-old daughter Eloise, and are expecting a son this fall.

“We’re pretty busy over here,” he says with a laugh, “with baby number two and gearing up to hit the road full-time, so I’ve got to get a lot of things in order before Sept. 2 gets here. But I wouldn’t trade it for the world. We’re just hoping for a healthy baby and a healthy momma. It’ll be a happy Davis household.”

In addition to his music, Davis has become known for his dark, bushy beard. On the video for “Almost Maybes,” he and former “Bachelorette” star Hannah Brown play out scenes from relationships that didn’t work out. It also shows a significantly smaller beard, which started a social media discussion on whether Davis should go back to the long version or keep it short.

Davis gets a kick out of the whole issue. “I’ve always felt like I had a pretty good beard, but it’s been crazy to talk about facial hair as much as I have for the past five years,” he says. “The last time I was clean-shaven was for a buddy’s wedding. I was in the wedding so I felt like I needed to clean myself up a little bit. That was the last time I shaved with a razor, it was 2015, which is the time I met my wife. So my wife met me when I didn’t have a beard and has never seen me without one since.”

To keep his beard in good shape, he gets it trimmed by a professional, uses a lot of beard oil and beard shampoo. “I never thought I’d be a guy that used beard shampoo, but I do. It would blow your mind if you dive into all the accessories with beards nowadays. It’s pretty wild,” he says.

Turning to his clothes, he says before he got into the music business he would opt for “some cowboy boots, a pair of jeans and just a T-shirt. Now, I really dig Double RL and all my shirts are from Zara: those are my two favorites.” And when red carpets make their return after the pandemic, he’ll work with his L.A.-based stylist, Evan Simonitsch, to up the ante a bit.

“He makes it so easy for me, he just sends over stuff and says pick from these three looks. I actually love suits and like getting dressed up. I enjoy award shows for that reason. I feel like they always look sharp, are always super uncomfortable but look good in photos.”

As Davis gears up to promote his new album, he’s still getting plenty of traction from the popular songs from his first one, including “Slow Dance in a Parking Lot” which highlights a couple who can’t bear to call it a night so stop by a Walmart and sway to an old Garth Brooks song.

Davis says that song was biographical for his cowriter and friend Lonnie Fowler and his now-wife. “It was their first date,” he says. “They went to a college formal, he had to leave early and on the way home, he pulled into a Walmart parking lot.”

But have Davis and his wife visited Walmart for a little slow dance?  “After it came out as a single, I told my wife,’ so that I’m not a complete hypocrite, we need to slow dance in a parking lot.’ So she and I slow danced in a Target parking lot — a little curveball, but I think it still works.”