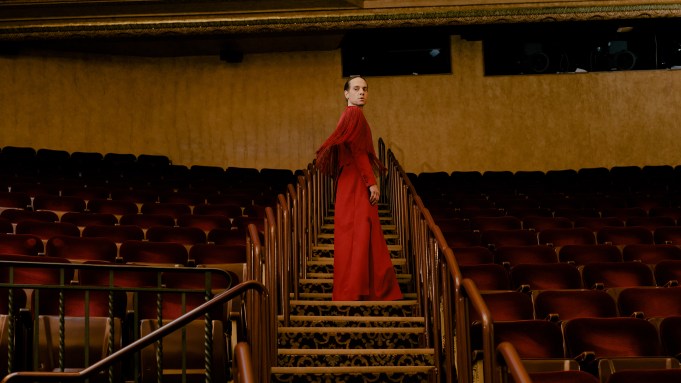 “So here’s the good news about this: as I explained, I’m already in mourning for having to take it off,” says Jordan Roth, back in a white button down and jeans as he sits on the banister in the mezzanine of the Hirschfeld Theater.

“So now, I got to wear it and experience, take it off and I get to put it back on tomorrow.”

It’s Sunday morning and Roth has just completed a final fitting for his Met Gala look; the theater owner and producer is feeling rather sentimental already, but given the context, it should be expected.

“This was really like creating a piece of theater,” Roth says. “It has the same moments of insight that reveal it, it has the same goal of personal expression, and for me, it is an outward expression of how it feels; it also reflects back to me how I want to feel. And I think that, when fashion is at its most meaningful, that’s why.”

Roth is making his Met Gala debut in Givenchy Haute Couture — one of the first red carpet moments for the newly launched men’s couture line. After much thought (and a transformative visit to the Givenchy atelier in Paris during fashion week), Roth is wearing a long wool and silk red tailored evening coat with a red hand-embroidered beaded cape and red straight-leg trousers.

“As soon as I knew the theme, I immediately went to a cardinal silhouette and cardinal red,” Roth says of this year’s exhibition, “Heavenly Bodies: Fashion and the Catholic Imagination.” “And then had this really extraordinary aesthetic journey. That silhouette is, of course, so much a part of the Givenchy legacy, so it was an immediate place to begin. In fact, in this season’s couture for the women’s pieces, that is a shape that Clare [Waight Keller] explored in several pieces. It was a really interesting process of pulling from both the men’s couture pieces and then women’s couture pieces, in terms of silhouette and energy.”

Roth is supplemented in his fashion knowledge by his close friendship with Anna Wintour, who was actively involved in the creation of the Givenchy look. The jacket initially started as a cape on a short jacket, but, at Wintour’s guidance, evolved into a longer coat with a cape constructed from strands of beads.

“Having her friendship and insight on this wants to be as it evolves…it’s a sort of care and insight and confidence that she offers to the piece, and to me, that I’m very grateful for,” Roth says of Wintour. “And adds so much to the experience of creating it.”

Roth, 42, is the president and co-owner of Jujamcyn Theaters, a group of five Broadway theaters home to recent productions like “Springsteen on Broadway,” “Mean Girls,” “Frozen” and, of course, “Angels in America,” of which Roth is a producer.  He’s also a fashion lover and respecter; in his mind, any conversation surrounding the insensitivity of pairing fashion with religious art is wildly misguided. For those who see fashion as a true art form, there is nothing frivolous about it.

“I didn’t actually digest until I had it on and was doing these portraits…how it actually took me to a place of great reverence, and a place of great emotional stillness. Which is really interesting because that is, I think, the goal of the architecture and the clothes that we are celebrating and exploring in this exhibit,” Roth says. “It’s sort of a fascinating surprise and joy to actually have the feeling. And that’s what I think extraordinary designs, extraordinary craftsmanship can do to our hearts and our brains. It pushes you but I also think it reveals you, in the way that great theater does, in the way that great art does.”

Roth might be, dare we say, the perfect person to concoct a look themed to fashion and Catholicism (though, he notes, he is Jewish).

“My personal religion is one of family and spirituality, that I connect very deeply to. But I also have always connected very deeply to the aesthetic of all religions; the way in which, whether you’re in a temple or you’re in a cathedral, or any other number of places of worship organized or not, how the aesthetic works on you to lift you, to give you a sense of calm and of what’s bigger than you,” he says. As he speaks, he looks around him throughout the empty theater.

“The theater, to me, is a sacred space. Performance spaces and spaces of religious worship share so much in common: they are places where we gather as a community to lay down burden and to connect with a shared humanity,” he says. “And it is not a mistake that the architecture and design and fabric and texture of these buildings and religious buildings are very much the same. In our references, the extraordinary paintings of cardinals, the tone of the reds, the crispness of the whites, the volumes of the fabric, those were all references for this piece, and those are all images that have great meaning for me; not necessarily as a worshipper but for their aesthetic meaning. This exhibit and this gala are shining light on the art that is fashion, equal to great paintings, the great sculpture, the great performance art, at its peak, which all of this is. Great fashion is great performance art.”