Jordyn Woods, Rosanna Arquette and Padma Lakshmi were among the 22 models who showed their support by walking the runway in red designer dresses. 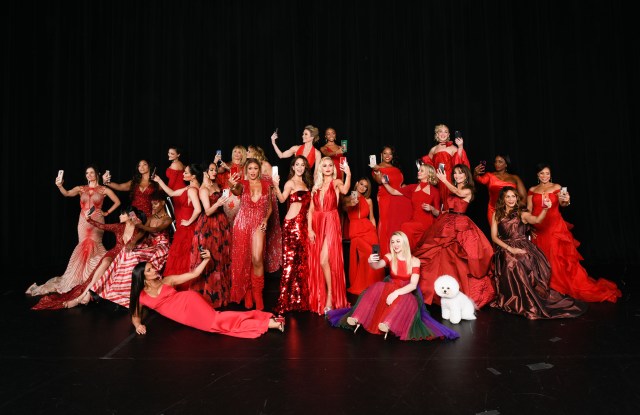 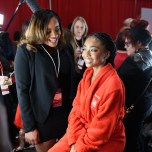 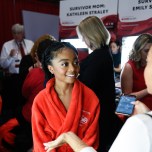 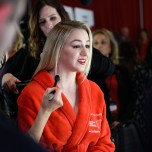 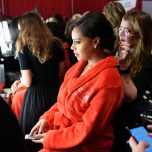 Considering how the heart powers the body, many celebrity models had messages of empowerment at Thursday night’s Red Dress Collection runway show.

Jordyn Woods. Skai Jackson, Eve, Rosanna Arquette, Susan Lucci, WWE’s Nikki and Brie Bella, Bo Derek and Sherri Shepherd were among the 22 enlistees at the 15th annual American Heart Association’s Go Red for Women event. “Top Chef” lead Padma Lakshmi hosted the hourlong event at the Manhattan Center, and Eve capped off the night, returning to the runway in a Naeem Khan dress for a surprise performance. A troupe of modern dancers started the program and then The War and Treaty’s Michael and Tanya Trotter belted out a few songs.

Nicole Ari Parker of “Empire” showed her strength by wearing a purple Catherine Regehr gown instead of red, whereas ABC News and “Good Morning America” journalist Amy Robach flexed her biceps — bodybuilder style – in an Alexia Maria halter-neck dress. “Wonder Years” actress Danica McKellar struck a similar pose to highlight her sculpted arms and her red-striped nude-colored dress. Oliver Tolentino. Eve, Becky G and Lakshmi showed off their designer might with multiple wardrobe changes. For the “Top Chef” Star that meant frocks from Cushnie, Christian Siriano and Reem Acra. In acknowledging platinum sponsors, Macy’s and CVS Health, Lakshmi thanked the latter for no longer selling cigarettes. “Tonight is a celebration of the collected power that women possess when we come together to break barriers, overcome obstacles and vow to never give up,” she said. “Tonight is also a reminder to how much work we have ahead of us to improve societal issues that impact health.”

While 21-year-old Jordyn Woods hit the red carpet, her manager mother chatted about her multicultural daughter’s relatability, having overcome obstacles as “a thicker girl” and “how she empowers so many kids and young adults,” while keeping an eye on the 8 million-strong influencer’s red Chanel bag. The elder Woods’ said she tells her daughter, “To stay humble and grateful and answer to God. It’s above all of this. I’m from a Michigan farm so being in this field is totally different. I was raised by my dad who owned a gas station.”

In a Carolina Herrera gown, Skai Jackson stood during one final touch-up, while her mother stated, “She is 16 years old.” But the diminutive “Jessie and Bunk’d” actress dealt with some online bunk earlier this month. In response to claims of her murder, the actress told Twitter trolls to “get a job, go to school, do something other than sit behind your computer and start a hashtag saying I’m dead.” Before heading backstage, The CW’s “Riverdale” actress Ashleigh Murray went out of her way to say hello to Jackson. Wearing a Stella Nolasco dress, Murray said she is ready to start shooting “Katy Keene,” a pilot about a group of friends trying to make their way in New York. The fashion-artist-entertainment roles are based on “Archie” comic characters.

After designer Marc Bouwer helped Arquette adjust a red headpiece to accent her lace gown, she said bringing awareness to women’s health was the best part of the event. “There is fair equity that we need, and that we don’t have in health.”

She will start filming “Ratched,” a new show from Sarah Paulson and Brian Murray, whom she met at an Elle event honoring Mia and Ronan Farrow. Arquette said of the Pulitzer-winning Farrow, “He is one of the most honorable and amazing human beings and I thank him everyday for helping us all have the courage to come out and to tell the truth. He just got his doctorate at Oxford. He’s always writing, he’s always working, he’ll always do great thing that help change the world.”

NBC’s Sheinelle Jones of the “Today” show was fired up about a Saturday segment that will dig deeper into teacher shortages and strikes, as well as upcoming stories for Black History Month. As for morale at NBC in light of the shifting, #MeToo-driven media landscape, she said, “Honestly, I think we’re moving forward. It’s a season of moving forward. We all get along. The people I work with, Craig Melvin, Dylan Dwyer and Al Roker on our third hour are like siblings to me. And I feel like there is a sisterhood among the women. This is really one of the greatest times in my career, so I can’t complain.”

Derek spoke of helping produce “WASP,” a film about the 1,000 women who volunteered in the Women Service Air Force Projects in World War II. Jackie Cochran, the first female pilot to go supersonic, who set a series of speed, distance and altitude records, was a personal favorite.

On the runway, the animal activist Derek seemed taken with the bichon frise “Flynn,” the Best in Show winner at last year’s Westminster Dog Show. But the “Tommy Boy” and “10” actress didn’t appear to take herself too seriously. She said of beauty, “It doesn’t last. There is no secret. It goes. There is nothing we can do about it. It’s just called age.”

Brooke Burke’s sequined side-baring CD Greene dress was a sign of her risk-taking. Skydiving, staring down crocodiles, open water shark dives — the “I Dare You” TV Land star is always up for a scare. Recently she took the dare of doing all her own stunts for a film. “It was ah-maz-ing. It was like Lara Croft-like. Incredible. It kicked my ass,” she said. “I’m the one who is always sinking that thrill or adrenaline rush. I guess I just like getting out of my comfort zone, growing in that fear and challenging myself more. I’m less fearless now that I have four children.”

Nearby, “Fast and Furious” actress Nathalie Kelley sat on a stool in the lotus position, quietly reading Neil LaBute’s “The Way We Get By.” While others were encamped with stylists, publicists and hair and makeup teams, the Australian actress was solo, ready to go — but still wearing a plush red robe over her Randi Rahm dress. Having recently appeared in the “Dynasty” reboot, the Australian-born Angeleno said, “I mostly do television and it’s like my brain cells are dying.”

En route to the backstage lineup, Lucci showed a different kind of heart, toward the elevator operator, who had just sized up a 16-hour day, whispering as she exited, “All your hard work is going to pay off.” And when the Emmy-winning actress took a tumble on the runway, she recovered quickly, gathering up her Scarlett O’Hara-ish Ruben Singer gown and blowing kisses to the cheering crowd.