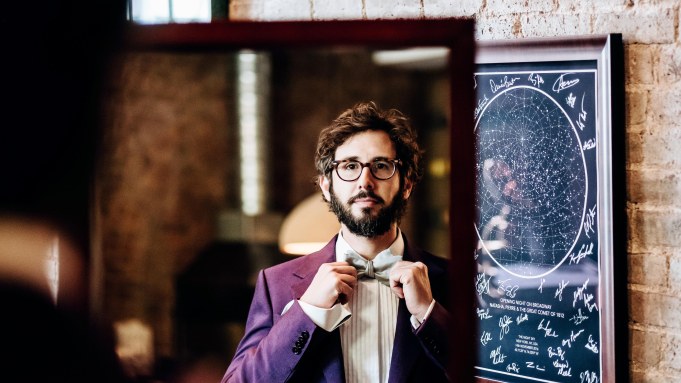 “Do you like the tie? Does it look too ‘Dumb and Dumber?’”

Josh Groban is polling the six or so people in his living room Saturday afternoon, an hour into his marathon fitting session for the next night’s Tony Awards, where he will preside as host alongside close friend Sara Bareilles. The usually uniform dresser is standing before a wardrobe of options squarely outside his normal realm, including many printed suit jackets and a gold sparkly bow tie, and is in need of some assurance.

The tie was cleared as safely far from “Dumb and Dumber” territory, but the gold bow tie is a little too much of a stretch for the musician, and will be making the return journey to Gucci (much to his stylist’s dismay).

“I dress up about once a year,” Groban says as the current tie is adjusted by an assistant. “I don’t normally get to play dress-up all night. So yeah, a lot of penguin suits.”

While a departure, he’s having fun playing the part of fashionista host. He comes bounding out of his bedroom dressed in his first look of the night and does a little jig for his audience. Crosby, Stills & Nash, Fleetwood Mac and Van Morrison play over the speaker system as the team drinks cold brew “jet fuel” and each weighs in on Groban’s sartorial fate for the big night.

Groban’s stylist of the past few years, Robert Molnar, has pulled tuxedos and suits for the host to rotate through, interchanging with the various costume moments Groban and Bareilles have up their sleeve. He’ll begin, it’s decided, in eggplant Gucci for the red carpet, before changing into all black Saint Laurent, a navy printed Ferragamo look and a classic Hermès tux; for the after parties, it’s back to color in burgundy Paul Smith, finished with a printed tie.

An embossed Brioni jacket is debated but nixed by Groban for being too flashy. He tries patent dress shoes with the Saint Laurent look but, it’s uniformly agreed upon, it needs something less shiny. For the Paul Smith suit, Molnar pulls out tan Saint Laurent Chelsea boots, but they’re not quite right on Groban, who opts for dress shoes instead.

He and Bareilles worked long distance over the past few months on the three-hour program, with the month between nominations and the awards being crunch time.

“With the Oscars and the Emmys, you have a long lead-up time between the nominations and the show. With the Tonys, you get the nominations and then you have to figure out what you’re going to do with those shows,” Groban says, sitting cross-legged on a teal velvet couch following the fittings. “Our day jobs kept us out of New York right up until a few weeks ago; I’ve been in the U.K., I’ve been in Los Angeles, Sara and I were just in Virginia doing an arts education gala for our friend Jason Mraz, so we’ve been coordinating a lot from hotel rooms…Facetime calls at three in the morning U.K. time, I had a little piano set up in my room in London.”

The duo’s hosting approach has been to stay as true to themselves as possible, which means not taking on any of the expected tropes an awards show host might be expected to.

“We’re not stand-up comedians, we’re not already talk-show hosts,” he says. “There are a lot of things when you’re hiring a host for an awards show, sometimes you have that where people know what you’re already going to do, that you’re going to go out and you’re going to zing people in the audience and you’re going to make fun of this and you’re going to be edgy…and Sara and I first and foremost are coming from the music world. We are crossover into the Broadway community that has been so open-armed to us, we’re fans of everybody in that room, and so we figure there’s enough cynicism to go around in the world right now; let’s go out there and be ourselves, let’s be enthusiastic, let’s have positive energy, which is something I think a lot of people really want and need right now.”

Come Monday, Groban will be off relaxing around his neighborhood — “I’m going to take a long walk,” he says — but will then be right back to work on his next record in Los Angeles, due in the fall. He also has the Netflix show “The Good Cop” on the horizon, where he plays “a clean-shaven, obsessive compulsive, goody-two-shoes homicide detective,” and a European stadium tour following the album’s release.

What he’ll wear for all of that remains to be seen. For now, there are more suits to try on.

“Once I have something I really like — much to Robert Molnar’s chagrin — I like it and I wear it all the time,” Groban says. “He’s always trying to push me out of my shell. Always. But you know what Robert, I was bullied too much in school to take risks on the red carpet. Every time I tried to go out of the norm at school I’d get a wedgie. But keep pushing. Every so often maybe I’ll wear a gold bow tie on the red carpet.”