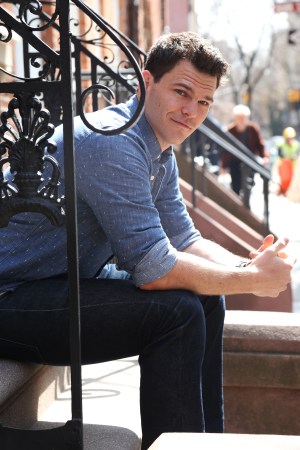 “The only things I was ever any good at when I was in high school were English and drama,” says Josh Helman over a lunch of salmon at Café Minerva in New York’s West Village.

He’s just flown in from the Vancouver set of “Wayward Pines” and is in town to chat all things “X-Men: Apocalypse,” his second film in the franchise, which hits theaters Friday. As evidenced by his busy filming schedule, the drama side won out over his English classes back in high school.

“I made a pact with myself that when I graduated I would audition for an acting school in Brisbane that I wanted to go to and, if I didn’t get in, I would try to become a novelist,” he continues. “I was just lucky enough to get into the acting program.”

Helman, 30, is Brooklyn-based now, but like any good Aussie, traveled extensively throughout his upbringing before landing in New York. Born in Adelaide and raised in Queensland, his family moved around thanks to his father’s job as a pilot. After shooting “The Pacific” in Melbourne, “I totally fell in love with it so I moved there for about a year-and-a-half before I moved to the States.” Williamsburg is now home. “I just turned 30 and I feel like if you’re on Bedford [Avenue] you should be a hip kid,” he laughs. “Those days are over for me.”

After graduating from the Brisbane acting program in 2006, he booked a few episodes on “Home and Away,” the rite-of-passage Aussie soap that launched the careers of Heath Ledger, Naomi Watts, Chris Hemsworth, Isla Fisher, Simon Baker and more. “I feel like pretty much every Australian actor has either done ‘Home and Away’ or ‘Neighbours,’” Helman says.

While relocating to the States isn’t crucial for professional success, it was always how Helman envisioned an acting career. “I grew up watching American films and I loved them so much so that when I first started acting I did everything in an American accent,” he says. “I kind of had to teach myself how to speak like an Australian when I would act.”

It was natural then that when given the opportunity to relocate to the States, he jumped. “I came over for the premiere of [the HBO series] ‘The Pacific,’ and I never intended to stay in the States, but they got me a three-year visa for two weeks of work,” he says. “And I was like, ‘Well, I might as well just stay.’ I’ve always had a love affair with American cinema.”

Quintessential to American cinema is the summer blockbuster; after appearing in last year’s “Mad Max: Fury Road,” Helman will reprise his role as William Stryker in Friday’s “X-Men,” which he first portrayed in 2014’s “X-Men: Days of Future Past.” His interest in the comic-book franchise stems from his perceptions as a writing-based actor.

“I hadn’t grown up reading comic books, so I didn’t know the source material very well. But I thought it was such a remarkable film,” he says of the first “X-Men” script he read. “It really humanized the story of what is a very kind of fantastical world. And that to me was very exciting.”

He finds the social messages of the franchise compelling. “The opening sequence of the original ‘X-Men’ is at a Nazi death camp — it’s not withholding any punches. It goes right for the throat,” he says. “And I think they kind of have to — you have the opportunity through those stories to really explore those things — and I feel like you have a responsibility to try to do that, rather than to buy a million-dollar movie that is just treading water so that people will buy popcorn and tickets.”

Earlier this year Helman was seen on the Starz series “Flesh and Bone,” a dark take on the twisted drama in the underbelly of the professional ballet world. Helman played the troubled war veteran brother to the show’s lead female character, a role he almost psyched himself out of. “I think that day I was having a particularly sh—y day, so left the audition without auditioning,” he says. “I got on the subway and I went one stop and I was, like, ‘What are you doing you idiot, just go back,’ and I got off the subway and walked back and apologized to the casting director. And scraped through to the next round.”

Much like Stryker, Helman’s “Flesh and Bone” role was, perhaps, not an audience favorite — he’s brooding, troubled and polarizing. And though he is none of these things over lunch, it’s clear there is a natural pull towards such characters.

“The stories of why people do things are the most interesting to me,” he says. “It often makes it harder, but I don’t want to make things easy on myself. If we’re going to tell stories, I think we should tell them as intimately as possible.”