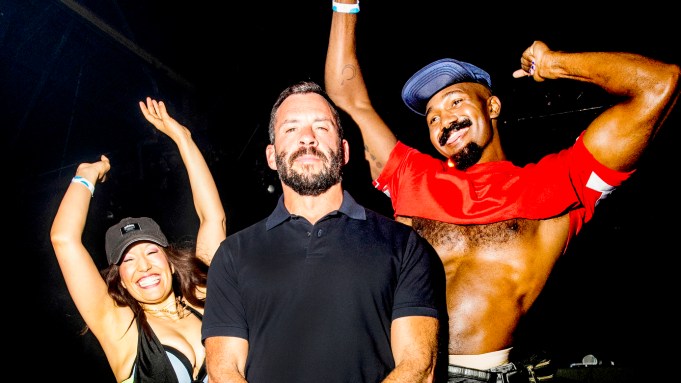 It’s the Sunday of Memorial Day weekend, ostensibly the start of summer in New York City. The city is quiet — people tend to escape to beachier vistas — but a Sunday night on a holiday weekend, when many corporate types have Monday off, doubles as a massive party night, too; the perfect night for Horse Meat Disco, a legendary fete that originated in London and was brought to New York City 10 years ago by event producer Josh Wood.

Wood is in zen mode that Sunday, practicing self care.

“I meditate, I exercise and I spend the day with my kids or my friends,” he said casually over a cup of coffee at his airy and sun-drenched home in Brooklyn. “I try to distract myself from what’s going on but I don’t really get very stressed anymore about it.”

Wood has been a major player in the event planning and party scene in the city for more than two decades, but there is deeper meaning to his career trajectory: It’s all done to support his passion of fundraising for causes for the queer community — his community — and for other marginalized groups.

“I feel like as a culture in New York, particularly more the gay men, we tend to live this life of searching from pleasure to pleasure. Life can be about going to the nice destination or going to the next party or taking care of our bodies,” he said, alluding to more surface pursuits. But he sees more for the LGTBQ community. “I think queer people are very politically and socially minded, but I think it’s important to constantly encourage them to do more and be of service.”

Wood is empathic about his works mission, and his way of being of service: “I throw parties to pay for these philanthropic endeavors. I produced entertainment, mostly for queer people, that had a political or a philanthropic edge,” he explained of his early events, underscoring how philanthropy has been a pillar of work since his humble beginnings.

At an event in 2003, he tapped actor John Cameron Mitchell to help get out the message for marriage equality for the LGBTQ community. Way before the landmark Supreme Court case (Obergefell v. Hodges) that made gay marriage legal at a federal level in 2015, Wood remembers, at the time, the community wasn’t sure marriage equality would ever be the law of the land. He dug his heels in, putting up his own money, coming up with the idea for the party, selling tickets and in the end, donating profits to the cause.

Since then, he’s produced a mix of iconic global charitable events: the amfAR (the Foundation for AIDS Research) gala, the New York City Ballet Fall gala, The Great New York Foodathon, marquee events that have allowed him work with iconic divas — Madonna? Kylie? Gaga? Wood has them in his Rolodex. He once convinced Ricky Martin to accept an award at the amfAR gala a week after Martin came out publicly. Woods’ first time doing amfAR was a hit, he said. “From there I just started working with famous people in the community, luckily amplifying them in a way and tying it to philanthropy.

“Grace Jones made me fly 20 Philip Treacy boxes from London of all her hats,” he said of the Jamaican model, singer and actress. “I had to get her oysters backstage. But she put together the most amazing show.” They went on to work together several more times.

Lady Gaga and the event producer go way back. He booked her early on at the request of former Limelight club kid and nightlife personality Kenny Kenny, who Wood said told him: “There’s this girl named Lady Gaga who wants to perform. She has so many Myspace followers and she’s really persistent.” It lead to him to doing a promotion for Gaga’s first album and teaming with her to bring awareness to a cause important to them both, with the National Equality March in Washington, D.C.

Another event Wood has had a hand in: the Pines Party. A massive summer circuit party in Fire Island New York — an enclave for queer folk dating back to the days of Oscar Wilde, and cemented into American queer history and lore. It was on Fire island that Wood saw the power of disco. Often disregarded in musical history, disco has a special place in the LGBTQ community as a space where sexual fluidity and expression were allowed and championed.

“I got fascinated with disco music and culture,” he said, partly by an opportunity he got to digitize DJ sets from The Saint nightclub, another New York queer night life institution from the past.  “Those parties very much had a peak and an arc. They would tell a story over the night through the music.”

This fascination is what lead him to Horse Meat Disco, originally founded by a mix of DJ’s in London, Wood brought them to a Fire Island Pines Party to play disco.

“I was doing parties at Cielo with Victor Calderone for many years,” which laid the ground work for Wood’s first Stateside Horse Meat Disco at the Meatpacking club. “People just loved it.”

Today, Josh Wood Production has freelancers in the cities he throws events in and seven full-time employees, most of whom are “practically family,” like his chief operating officer Mimi Eayrs, who was once a cashier at his parties and has been with him for nearly 15 years. His team is grateful to be back to throwing in-person events as the global pandemic appears to wane.

“During the pandemic, I was mostly locked up in a house in Woodstock with my kids,” he said, and like many, he thought COVID-19 would be a little vacation, but the severity of the pandemic quickly became clear. “I didn’t want to have to close my company,” he said. He was lucky enough to pivot to virtual events and because of his work with amfAR (he is a registered fundraiser with the New York State Attorney General), it enabled him to fundraise for other things.

“I called the DNC [Democratic National Committee] and then the Biden campaign, and offered to work for free. So we started working on voter registration, trying to get people in disenfranchised communities to register to vote,” he said. That lead to working directly with the Biden campaign on virtual events and raising money. And, he said, “That was really cool.“

The Horse Meat Disco party now is a staple of NYC queer night life; 2022 will see Horse Meat Disco happen seven times. And true to Woods’ passion, proceeds from the event will continue to be donated and will soon formalize with a new program called “Disco Dollars.”

“When people are checking out and buying their tickets, they can donate money to the Ali Forney Center [the largest community center helping LGBTQ unhoused youth in the U.S.],” he said of the Disco Dollars project, which will also offer other opportunities for directing funds. “There’s a campaign that I feel really passionately about. They’re building the first building specifically for transgender youth in Harlem. They actually have the property and they need another million dollars.”

Wood is personally making a donation and, he said, “Over the next year or two, every time people are buying tickets, they’re going to be able to make donations. And representatives from Ali Forney Center will come to the parties and give out information so people get more involved.”

Horse Meat Disco is growing, expanding to Chicago and Los Angeles, and soon Miami. Wood is mapping out the logistics so the new party can also have a charitable arm as well, potentially linking to local causes.

For Wood, giving back has been about paying it forward.

“I think as American queer people, we’re very lucky, and sometimes spoiled,“ he said, drawing a contrast with countries where people in the LGBTQ community are even more persecuted for living their truth. “One of the reasons why I wanted to do the thing for the Ali Forney Center is because I was born a white guy in an upper-middle class family in suburbia. And it was just chance that my life became the way that it did. And I feel like, without trying to be condescending, it’s my obligation to give back. If I was born a different color or in a different place, I very easily could have been in a very different situation,” he said.

As far as where the LGBTQ community goes from here, particularly at a time when rights are increasingly under threat, it’s about continuing the work, according to Wood.

“We have to stay very activist and protesting and giving money to our political leaders,“ he said. “The work doesn’t end.”