The designer helped ensure Francis' visit would be a comfortable one.

By Rosemary Feitelberg
with contributions from Bambina Olivares
on January 18, 2015
View Slideshow 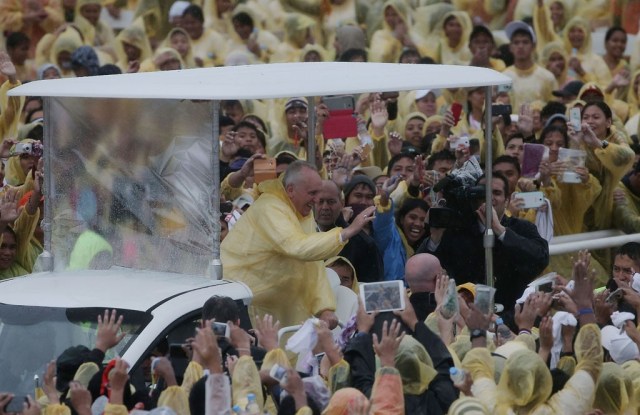 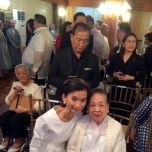 DESPITE THIS WEEKEND’S torrential rains in the Philippines when Pope Francis touched down there, millions of Filipinos were elated to welcome him.

And hard at work behind the scenes was designer Josie Natori.

The designer played an integral role in planning the Pope’s four-day stay, which wraps today but not before 6.5 million cheering, kerchief-waving fans turned out Sunday, a record-breaking crowd for an outdoor mass in Manila’s Rizal Park.

With 85 million of its 95 million residents said to be Catholics, the Philippines is the third-largest Catholic-populated country behind Brazil and Mexico, respectively. The U.S. is fourth.

During seven months of planning, Natori and her mother Angelita Almeda Cruz, an unofficial liaison to the Vatican Embassy, helped ensure Francis’ stay would be a comfortable one. Natori provided the linens, towels and bathrobe for His Holiness and helped to spruce up his accommodations in Manila. She also chose the fabrics for curtains and replaced a bedside table and lamp. “Basically, we all helped in our own ways,” she said, adding with a laugh. “I provided everything but the soap.

“We just wanted to respect the way he lives, which is very simple. Everything was done simply and mostly in white because that is what he would have wanted,” Natori said.

She and her mother were among 65 Filipino organizers who personally met Pope Francis. The Manila-born Natori said, “It was so humbling. I was so speechless that I couldn’t say anything,” she said. “He is so tender and loving. There is almost no ceremony with him.

“He gave each of us a set of rosary beads and of course my mother brought a handful of them for him to bless,” she said. “My mother spoke with the pope in Spanish, but I couldn’t say a thing. I kissed his hand. It was very special. I feel so blessed to have been part of it.”

Having actually participated with her mother in Pope Benedict XVI’s 2008 mass at Yankee Stadium, Natori said she found Francis to be more approachable. Honored as she is to have met two popes, Natori said, “My mother has met five.” Both women wore all white Natori-designed pieces for a private event Saturday at the Nunciature, where the pope stayed.

There was no shortage of yellow raincoats amidst the massive crowds that clogged the streets (many of which were blocked off) and camped out in Rizal Park, hotel parking lots and any other open space that they could find. Before concluding Sunday’s mass, Pope Francis asked the 6.5 million worshipers to raise their kerchiefs for a papal blessing. Some had slept in the park for a few nights to be part of what turned out to be a six-hour event. Many obliged and also raised small statues of an infant Jesus as the mass was dedicated to Santo Niño. “Everyone is so excited and touched. Many can be seen on TV crying,” Natori said. “The euphoria is so hard to explain.”

Zealous as his fans in the Philippines appeared to be, the Pope maintained his every man’s ways. He arrived for an intimate gathering Sunday with Filipino Cardinal Luis Antonio Tagle, local clergy, Natori and other organizers in a Volkswagen sedan.

He also traveled around in a makeshift popemobile — a souped-up “jeepney,” essentially what looks like it could be a cross between a Jeep and a truck. Painted white, it featured a raised platform that allowed the Pope to wave to the faithful as he drove past. Left behind by American soldiers after World War II, jeepneys were repurposed and are often decorated to serve as cheap-and-cheerful transportation for commuters. “The people in the streets are teeming. The crowds are really mind boggling,” Natori said. “But the Pope seems to be enjoying himself.”

There were reportedly 40,000 soldiers and police officers deployed Sunday on the streets for his security.

And Francis, who prefers not to live in Vatican City’s apostolic palace, also lived up to his austere image. His advance security detail made it known that Francis would prefer a small room and a single bed, rather than the king-size mattress that had been purchased for him. “As long as he was happy, that is all that matters,” Natori said. “The nuns told me he was pleased.”

Heavy storms forced Francis to cut short Saturday’s tour to Tacloban, the same city that was devastated by a typhoon in 2013, the disaster that prompted his tour of the country. After donning a yellow raincoat as soon as he finished saying an outdoor mass in Tacloban, the Pope flew back to Manila four hours ahead of schedule. He was also there to bless a new community center for the impoverished, elderly and children. The early departure decision proved to be fortuitous as a small private plane crashed in Tacloban shortly after his departure, but the 16 people on board survived, according to Natori.

As for his message for her native country, the designer said Francis emphasized the need to help the poor, ill and the suffering. He also urged people in government “to stop corruption” and he “was quite clear” about the sanctity of life from conception through death.

While watching a televised event where Natori’s niece’s ballet students performed for the Pope, Natori noticed Francis blessing a woman in a wheelchair who happened to be the designer’s sister-in-law. “I had no idea she was even going to be there. He really loves to be about the people. You see him touching the children, the sick, the elderly — that’s really what he favors,” she said.

Noting local news reports of “no crime” during the papal visit, Natori said, “You like to think it will be long-lasting. He brought so much hope. He really imparted upon people to love your brother, really just love the world.”

Even though the Pope will soon be gone, Natori said she would extend the whirlwind weekend with a post-papal dinner with local clergy “for the recap.”