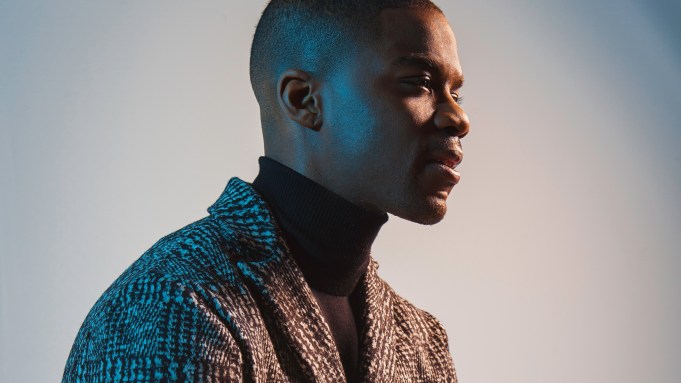 Imagine you’re auditioning for Denzel Washington’s adaptation of “Fences,” the Pulitzer Prize-winning play by August Wilson. You have an in: Viola Davis, who’s already been cast, is your mentor. You decide to do one of two things: A, work your connections and ask Davis to put in a good word for you or B, nail the audition and win over Washington without telling Davis of your interest in the part. Jovan Adepo went with option B.

Born in Oxfordshire, England, Adepo grew up in Waldorf, Maryland. He studied political science at Bowie State University and moved to Los Angeles after graduation to pursue a career in screenwriting. A family friend from church encouraged him to get into acting and put him in touch with her sister, who just so happened to be Emmy-, Tony- and Academy Award-winning actress Davis.

“There’s something to be said that you have access to someone, but you just choose not to use it,” Adepo, 28, says. “I think so often people go quick to that nepotism. ‘I should be OK, my cousin’s a producer, I can get into the movie.’ How about audition, earn the part and feel confident in knowing that the director felt you were the right person for the job versus hiring you because you know somebody? And let’s just be clear: Denzel’s not hiring nobody [if he] doesn’t want to.”

In an industry where who you know can be the difference between landing and losing a role, Adepo continues to rely on hard work, something he learned from Davis. “[Viola] had to work hard to get to where she is,” he says. “She put down the ground work, so she wasn’t gonna give me anything. Serious. Her and her husband Julius were very, very passionate about hard work and about really developing that craft. They definitely made sure that I was in the right mind-set that I needed to be in, but it was more of an ‘alright we gave you the tools and the direction, go out and get it and maybe we’ll see you.'”

While still auditioning for “Fences,” Adepo would go to Davis’ house for dinner and talk about everything but the film. In turn, Davis hardly mentioned it until Adepo officially got the part. She called him to congratulate him.

Adepo plays Cory Maxson, teenage son to Troy, played by Washington, and Rose, played by Davis. In his desperate attempts to assert his identity, Cory butts heads with his father, who enlists his help in building a fence in the backyard of their Pittsburgh home. Cory wants no part of the fence — but he does want Troy’s approval.

“That’s the aspect of a young American boy or just a young boy period,” Adepo says of his character. “That’s why it’s important for so many people to get to hear August Wilson’s material because people are quick to say, ‘This is exclusively about the black culture.’ It is in that that’s what the setting is, that’s what the story’s about. But I think the values and the experiences that these characters are going through in this family relate to the universal.”

“Fences” brought Adepo to Pittsburgh for the first time. “When you’re on set and you’re in a community like the Hill [District] — we shot in the Hill, exact neighborhood that the story takes place — there’s a strong sense of community and they take pride in their neighborhood,” he says. “All the neighbors know each other and everybody knows everybody’s gossip because it’s small. Denzel, one of the biggest stars in the world, comes into town, everybody knows about it and they’re ready. They got lawn chairs outside, sitting outside the gates when we’re coming on set to work. They’re always bringing food from their house to come feed you.”

Both Washington and Davis have received Golden Globe nominations for their roles. Adepo isn’t sure he’ll be able to attend the awards show due to potential scheduling conflicts, but he’s keeping a watch on awards season in general.

“I have a huge stack of screeners and I cannot wait to get home and finish watching all these movies,” he says. “I’ve always been a fan of movies well before I got involved in the industry. The magic that it brings and being able to, I guess, escape your troubles, escape whatever is going on in life and getting to live in this moment and in the story and live in the lives of these characters. This year in particular, like the last few, has been really interesting as far as the diversity, as far as the eclectic content that’s been coming out.”

Adepo already has a couple of projects to look forward to in the new year. The third and final season of HBO’s “The Leftovers,” in which he plays Michael Murphy, comes out in 2017, as does an untitled project by Darren Aronofsky, in which Adepo has a role. It’s apparent from his tone that he’s excited about both of these, but there’s also a hint of anxiety.