Her trove of clothing, which will be showcased in the exhibit, includes designs by Yves Saint Laurent, Oscar de la Renta, Ralph Rucci, Valentino Garavani, Azzedine Alaia, and Bill Blass. 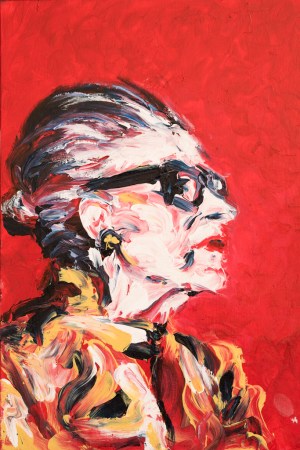 Joy Venturini Bianchi has been involved with Helpers, a charity that aids the developmentally disabled, for 62 years, since she was 13 years old. In her long dedication to this organization, she has found that giving to this group of people has improved her own life. And although she has been diagnosed with cancer, she is fighting it, partly because she still feels that she has more to give.

Certainly, her track record would suggest that. In the past, she has helped to fund three residences for the developmentally disabled. Now she is planning an event at the Hedge Gallery in San Francisco for October 17, “Celebrating Life Through Fashion, a Retrospective: Collection of Joy Venturini Bianchi,” which will benefit the group. Her trove of clothing, which will be showcased in the exhibit, includes designs by Yves Saint Laurent, Oscar de la Renta, Ralph Rucci, Valentino Garavani, Azzedine Alaïa and Bill Blass.

Among the enterprises Bianchi runs is the Helpers House of Couture, which sells high-end clothing and accessories to help fund her charitable initiatives.

“I met Vanessa Getty at a party here in San Francisco,” she said. “We’re at parties a lot together. She called her mother right away and gave us her first party at her home. Forty people, and it made $40,000 in four hours. We get clothing from all over the world, as far away as Saudi Arabia. From that, we launched this Helpers House of Couture and it’s been very, very successful. We have things from $10 to $30,000 and sizes from 00 to 23½.”

Another of her ideas was to have designers do what she called “mouse couture,” since people are afraid of both mice and of the developmentally disabled. She also launched a vegetable garden where her group of beneficiaries grew vegetables, which they would sell at the market, and created a line of Christmas ornaments made by her group, which were featured in windows including those of the Givenchy shop on Madison Avenue. “For anyone in need to go full circle, they must give back to the community, too,” she said.