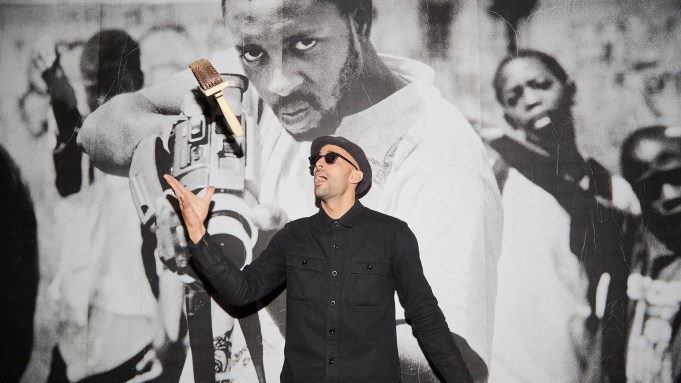 “People think I’m a photographer — I’m not,” says JR from behind his signature dark sunglasses. “Photography is just a medium. The pasting is the art, and the art is the process of doing it with the people.”

The French artist is at the Brooklyn Museum in the days ahead of a major show, “Chronicles,” which surveys his complete body of work for the first time in North America. Just as he rejects the label of photographer, he also doesn’t particularly like the categorization of a “street artist,” although he got his start in the graffiti culture of Paris and made his name wheatpasting his photographs on walls, at first illegally.

“If I take your photo, it doesn’t matter if I’m a good or bad photographer,” he adds. “It’s as important as the process of making the glue, of the printing. The art will be to use your portrait on the wall. That’s where everything will connect. If not, it’s just a portrait of you.”

Most of the pieces were already in place, including his latest work, a large-scale collaged mural of New Yorkers stretching across four walls of the space. But the image that he points to as launching his career was still in the process of going up on the wall welcoming visitors into the exhibition space. He was a teenager when he took the black-and-white photo of his friend, Ladj Ly, holding a video camera like a weapon in the projects of Paris and wheatpasted it on a building in their neighborhood. A year later, the mural ended up in a photo on the front page of The New York Times in its coverage of the 2005 riots in the Les Bosquets neighborhood of Clichy-sous-Bois outside Paris.

It’s all come full circle for the artist. Next year, Ly and JR are opening a school for cinema and art in their old neighborhood. Earlier this year, JR was commissioned to shoot a cover of Madonna for The New York Times Magazine.

Located in a display case near the photo of his friend is his first camera, which he found on a Subway as a teenager in the early Aughts. The happenstance gave direction to his early artistic inclinations, as he changed course from tagging his name around the city in the vein of other graffiti writers to documentation, shadowing older writers like Roka, Nomad, Saka as they tagged trains and tunnels around Paris. That was his art education.

“Now of course it’s good — I can put those in a museum,” he says. “But at the time it’s like, ‘oh I hope no one will see this, because I could get fined for climbing all those roofs and getting in all those tunnels.'”

He started making photocopies of his photos and wheatpasting them around town with his tag, framing them with spray paint and increasing the scale of the images as he went.

“The era of graffiti was 10 years before I started,” he says. “I was already at the end of that era but by pasting those photos in the street, without knowing it, I was at the beginning of another era, what later people call street art.”

He went on to photograph youth from his neighborhood up close, asking them to pose as a caricature of how they imagined themselves seen from the eyes of Parisians. JR then wheatpasted their photos with their names, age and location; several of those photos, from “Portrait of a Generation,” are on display in the exhibit. “You go from someone in the media you can’t recognize, to someone you could go and knock on the door,” says the artist of including the identification. “The big problem in the media was that France was burning and you’d see all those youths, masks and hoodies on, burning everything, but most of the youths were not a part of that. But that’s how the representation was; people were really scared in Paris, there was this big stereotype.”

It’s an idea that the artist has continued to explore — challenging stereotypes by highlighting humanity through specificity — next in Israel and Palestine as the two countries built a wall along the border. For “Face to Face” he and artist friend Marco photographed Israelis and Palestinians who worked in the same professions — two actors, two sculptors, two security guards, two teachers — again with each posing how they imagined the other would see them. The artists pasted the dual images on the wall. JR struck up conversations with people passing by as a camera man documented; the viewers had trouble figuring out who was from where.

People told him that the project would get him killed. Instead, he found constant discussion and debate that cut through the tension. “Only art can bring you to that complexity and paradox of things,” he says. “That made me realize that the people become the best spokesperson about the work because they’re from there. It really made me realize the power of the community and how they take the project forward,” he adds.

After traveling to various countries and interacting with the people and taking the photos himself, JR launched a new project, “Inside Out,” with his 2011 TED talk. He invited people to take their own photos, send them to him, and he would print and ship the images back, for free. Since launching the initiative, people from more than 139 countries have participated.

JR has a lot to say about his work, and anyone visiting the exhibit can hear him tell the stories in his own voice. The artist filmed himself talking about each project on display, and using an app, viewers can point their phone at any piece and the video will pop up.

The artist has also constructed a series of large-scale, site-specific murals of cities. Being unveiled at the Brooklyn Museum is a mural capturing more than 1,000 people selected randomly from New York’s five boroughs, “The Chronicles of New York City.” The work is accompanied by an app, where pulls up information on each person with an audio story told in their voice.

The project allowed JR to see a side of New York he hasn’t seen during his nine years living in the city. Everyone in the mural has been invited to its official debut, during which they’ll have an opportunity — really, an excuse — to meet each other.

“It’s the most amazing excuse to be able to go anywhere and be able to tap on people’s shoulders and say ‘who are you?'” says JR, who plans to do the project next in Cuba. “It’s kind of like the dream we all have when you take a coffee and you wonder, who’s that person?”