The actress was in London to mark the opening of Chopard's Bond Street boutique, a brand she stands behind for its commitment to sustainability.

LONDON — Julianne Moore doesn’t think there’s any direct relation between acting and activism, however she does use the global platform her illustrious film career has given her to support numerous causes she feels strongly about.

“I think being an actor is one thing but being an activist, is about supporting things you care about as a person and a citizen,” Moore said in an interview. “We all have a responsibility to act as citizens, where I am fortunate is that I have a public platform. But I always say these are things that are personal, I am not an authority, I am just speaking from my own experiences, from my own heart about the causes I care about.”

One such cause is sustainability and Moore has been putting a lot of effort as of late in rethinking everything about the way she consumes.

“My husband and I have been trying to eliminate plastic in our lives, not buy anymore plastics, reuse anything we have in our house. We really think about what kind of space we are taking up and how to consume less, how to use what we have, wear it and return it. We are all realizing we have limited amounts of space and resources and it is important to know how to share and use them responsibly,” said the actress.

That’s why she has also been a longtime supporter and friend of Chopard’s, which has embarked on a long-term “journey to sustainability” and has already been able to commit to using 100 percent ethical, fair mined gold as of last summer.

“When I met Caroline Scheufele [artistic director and copresident of Chopard] a few years ago, she really struck me because she was a pioneer of sustainability in the jewelry world, something that people were not doing. She didn’t have to be doing it but she used her leadership position to set an example,” added Moore, who was in London to celebrate Chopard’s revamped Bond Street boutique and was dripping in Chopard diamonds from large statement cuffs to emerald and diamond chandelier earrings, ahead of the opening party. 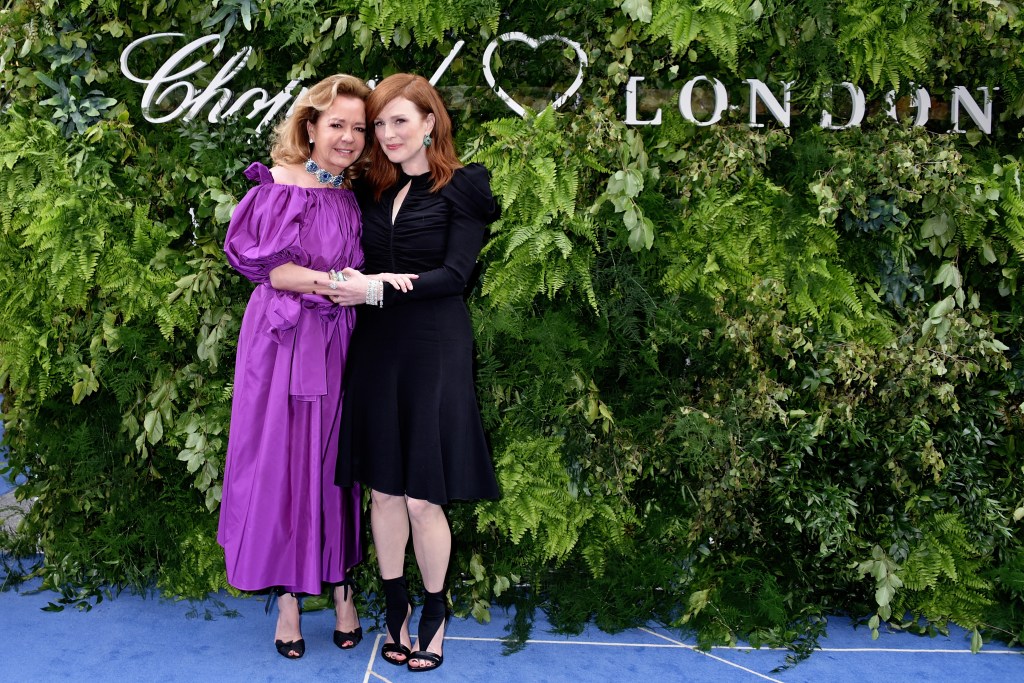 Moore is regularly seen sporting Chopard jewels on the red carpet — as she did during the recent Cannes Film Festival, where she was there to support the documentary “5B” that spotlights another cause she cares about, AIDS awareness.

“What a beautiful film, it really is extraordinary. When I moved to New York from Boston in the early Eighties, it just coincided with the very beginning of the AIDS epidemic so a lot of what happens in ‘5B’ really resonated with me personally. I arrived as a young person and there was not anyone in the acting community that was not touched by AIDS in one way or another,” said Moore, adding that “5B” tells the story of a ward that started in San Francisco where the doctors and nurses were treating patients in a humane way instead of ostracizing them.

Moore has also been promoting a number of film projects of her own.

The comedy-drama “Gloria Bell” in which she stars has already had a very warm reception by global audiences for the candid way it tells the story of a 50-year-old divorcée who’s up for romance, adventure — and a lot of late night dancing.

“I love everything about the character and Sebastian [Lelio] as a filmmaker. I think it’s so unusual for a film to focus on a human being just living their life, so the kind of intimacy you feel when you slowly watch it allows you to identify with her and everything she is going through. I also think this movie is really fun to watch. I do not think that cinema should be medicine, it should just be really enjoyable,” said Moore, adding that she’s always looking for emotional connection in a role and in elements that are human and relatable.

“That’s the thing with entertainment: When things feel overly manicured, it seems overly distancing for me. I feel like I am looking at something that’s not quite human. The things I respond to are things that have a very human quality to them. When something feels perfect and glossy, you do not have any kind of relationship to it, it does not feel like it is your life.”

Later this month, Moore will be heading to the Karlovy Vary film festival with her husband, the writer-director Bart Freundlich, her daughter and friends, where she’ll receive the Crystal Globe lifetime achievement honor and present her new movie “After the Wedding,” an American adaptation of the Danish original which was coproduced by Moore and Freundlich.

“This is the first time we produced something together and our daughter was also on set as an assistant,” said Moore.

“We were thinking of why and how can we make this different [to the original]. When the idea came to do a gender-flip, and put to women in the lead, I realized I wanted to play the part. I love the story, it’s a movie about choices you make in your life, family, relationships and children. What’s important is what different people choose and what brings them together.”

“After the Wedding” is set to be released in August in the U.S. and soon after Moore will be on to her next project, “The Glorias,” a film based on the life of Gloria Steinem that allowed Moore to get to know Steinem herself.

“I would never in my life have believed that I would get to spend some time with Gloria Steinem. She is just so remarkable in her consistency, in her tolerance and her ability to see many points of view and listen and extend herself. Her patience in terms of progress in the women’s movements and how long it takes for changes to take place really strikes me,” added the actress.