A still from "The Glorias" directed by Julie Taymor.

Julie Taymor is in Martha’s Vineyard right now, but she was supposed to be on a multiweek Greyhound bus trip. Her plan was to take her new film “The Glorias,” a Gloria Steinem biopic, on the road with her cast and producers in tow. They were going to host screenings in swing states throughout September and October, hoping to use the message of Steinem’s life and activism to mobilize voters. While the pandemic has called for a change of plans, the film is sticking with its pre-Election Day release, despite continued movie theater closures. Yes, a theatrical release would be nice. But time is of the essence, and there’s more at stake than just ticket sales.

When Taymor first read Gloria Steinem’s autobiography “My Life on the Road” several years ago, a movie adaptation of the book wasn’t obvious. “I felt it was completely uncinematic; impossible to make,” she says. And Steinem felt the same way.

“When I called [Steinem] to say, ‘I want to adapt the book,’ she was flabbergasted. She said, ‘how the hell are you going to do that?’” says Taymor. Steinem, who was familiar with Taymor’s mother and sister (both were prominent political activists in Massachusetts) had also recently watched her 2007 musical film “Across the Universe.” “[Steinem] said, ‘I don’t know how you could possibly do it, but it’s you. And if you want to do it, I want you to do it.'”

There were many challenges to getting Steinem’s story onscreen, using the book as a template: the stories meandered, and there wasn’t a clear dramatic act structure. And then there was the issue of time — the book follows Steinem from age six to 86. 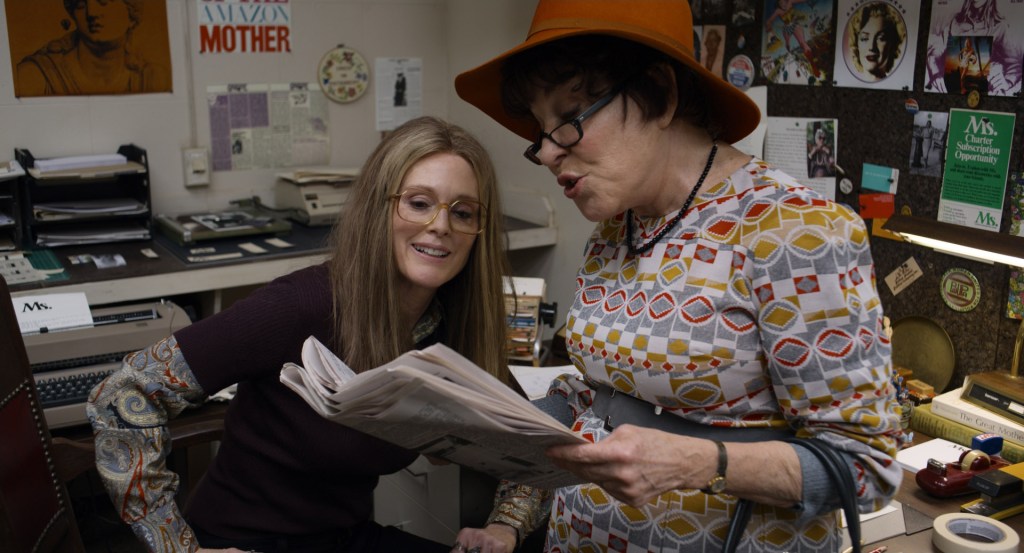 Julianne Moore and Bette Midler in a still from “The Glorias” directed by Julie Taymor.  Courtesy 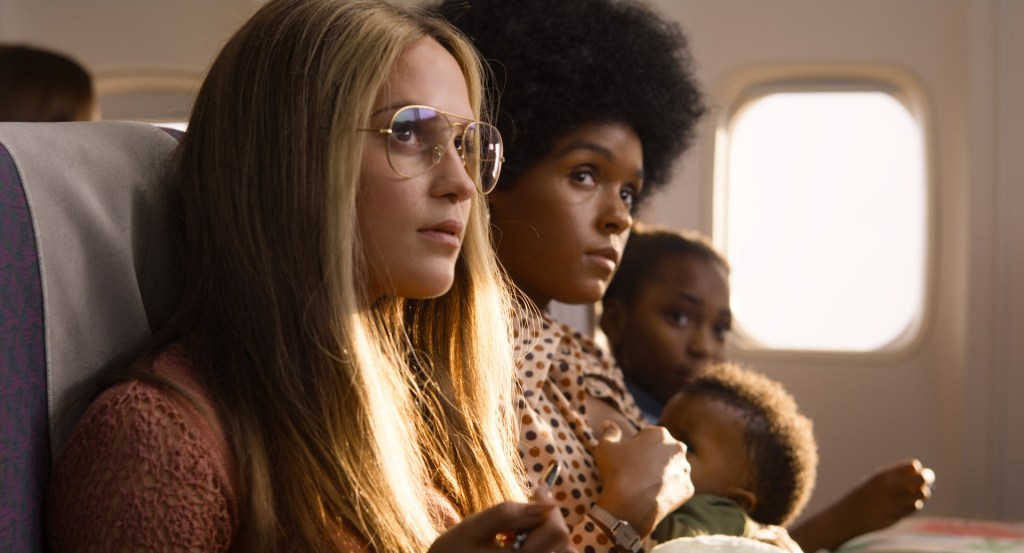 A still from “The Glorias” directed by Julie Taymor.  Courtesy

Taymor’s answer to the latter issue was to cast four different actresses to portray Steinem, choosing leads Julianne Moore and Alicia Vikander to play the feminist icon as an adult. Filmed in black-and-white, the setting allows the four Glorias at different points in life to interact and share wisdom. “I call it the ‘bus out of time,’” says Taymor of tapping into the surreal to portray Steinem’s internal journey. The bus was also Taymor’s solution to giving her otherwise sprawling road film a central spine to drive the story forward. It was also a way to show Steinem’s examination of her own life. Where the younger Gloria struggles with responding to a misogynist comment, the older one has had time to form a punchy one-liner. “It took the older Gloria to speak out and say, ‘some of us are actually becoming the man we thought we wanted to marry.’ Not that she ever said that to Gay Talese or Saul Bellow, but that was what she was thinking.”

“The Glorias” introduces lesser-known aspects of Steinem’s life, including her unconventional childhood; she didn’t go to school until she was 12 and living with her mother, who was mentally ill and routinely institutionalized, in Toledo. Her father, a traveling antiques salesman, inspired Steinem to pursue education through travel. These details were in Steinem’s book, but unlike when Taymor was making her 2002 Frida Kahlo biopic, she had easy access to her subject. Steinem visited the set, and was a resource for Taymor and her actresses; she also joined Taymor at Sundance for the film’s world premiere.

“A lot of women my age knew a lot about her. I didn’t,” says Taymor, who like Steinem spent part of her 20s living abroad in Asia. “I knew her, like many: the iconic image, the hair, the glasses, the miniskirts in the Sixties, the fashion. The very beautiful Gloria. I knew that she was one of the editors of Ms., and was one of the forerunners of the second wave of feminism.” 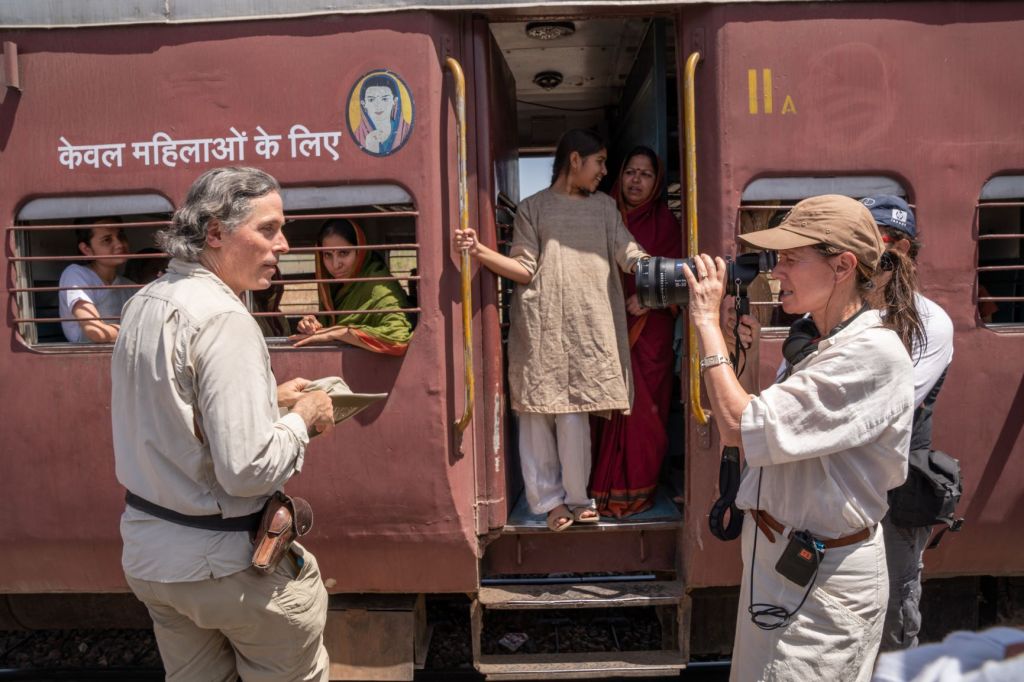 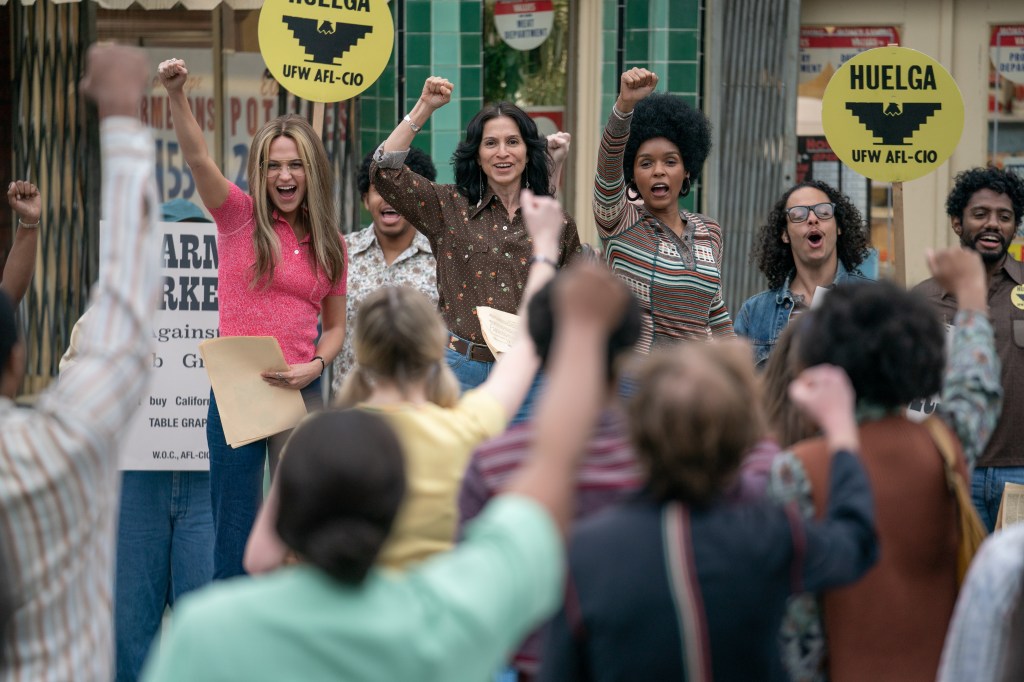 A still from “The Glorias” directed by Julie Taymor.  Courtesy

Steinem has faced misogyny throughout her career — interviews with newsmen like Harry Reasoner, re-created verbatim in the film, might be shocking to 2020 audiences but were less so when they aired. But Taymor didn’t want to paint men as the enemy, and she didn’t want to highlight Steinem’s romantic relationships. She instead underscored her relationships with fellow activists: Dolores Huerta, Florynce Kennedy, Wilma Mankiller, Bella Abzug, Dorothy Hughes. For Taymor, Steinem’s relationships with these women (portrayed in the film by actresses including Bette Midler, Janelle Monáe and Lorraine Toussaint) is the film’s love story. “In a way, these are the other Glorias,” says Taymor. “This is what makes Gloria — she is a receptacle for change.”

Taymor is working with a screenwriter to adapt a book (no word on which) and is writing a script of her own that will blend film and theater — a pan-Asian mythological tale that will incorporate four decades of her career. “Little bits of leftovers from ‘The Lion King,’ leftovers from ‘Spider-Man,’ leftover things that I put in boxes and said, ‘its time will come,'” she says, adding that the project stalled when Donald Trump got elected and the tourism industry in Korea fell out. In the meantime, she’s been listening to the music of “Glorias” wafting up from the basement as her husband, Elliot Goldenthal, pulls together the film’s score for a digital release.

Although her original Greyhound trip didn’t pan out, Taymor still gets some bus time: she and her crew make a cameo on the Greyhound bus in the film. And as they pull into the Women’s March in Washington, D.C., the bus turns from black-and-white into color.

“The Glorias” is a political film, and Taymor hopes that it will galvanize people to fight for the present and future they want. And in doing so, pay tribute to the past.

“Sorry to get into my politics, but it’s our politics. And that’s why I think this idea of talking about how women really struggled for choice back then is important,” says Taymor about abortion rights, on the eve of Supreme Court Justice Ruth Bader Ginsberg’s passing. “I don’t want young women and young men to take it for granted, because they’re going to lose it.”

“As Gloria said at the Women’s March, ‘Pressing send is not enough,'” she adds. 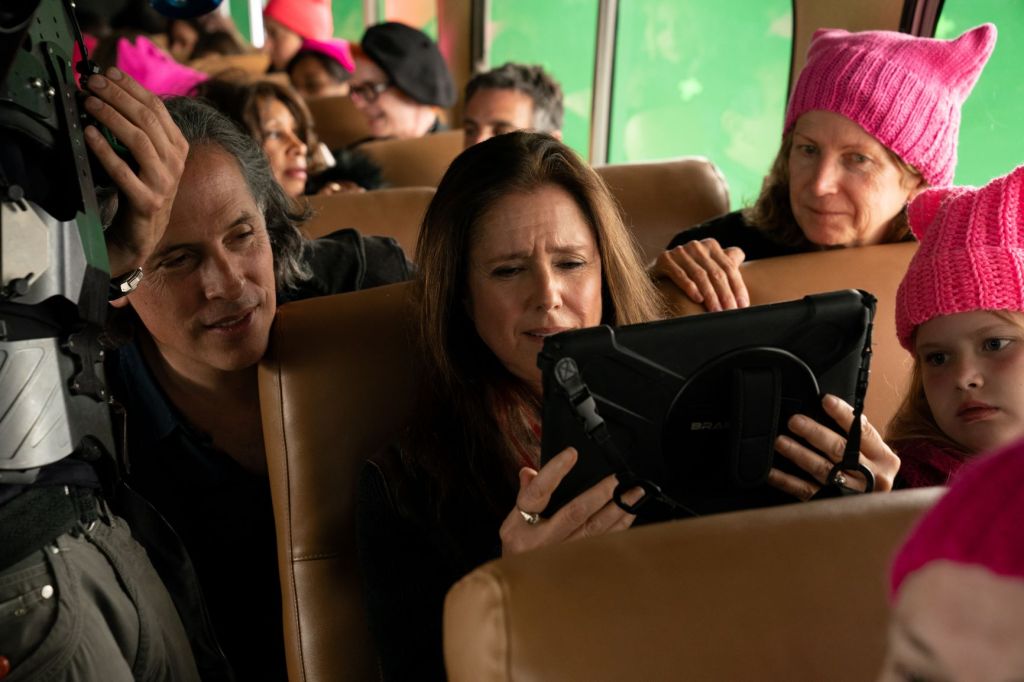 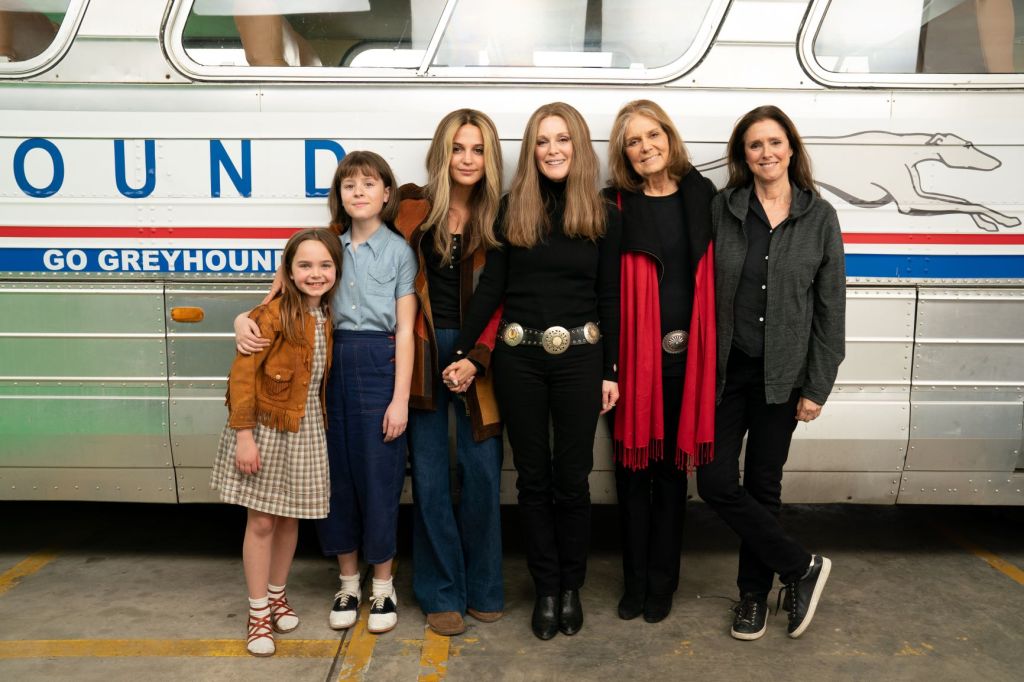 On set of “The Glorias.”  Courtesy 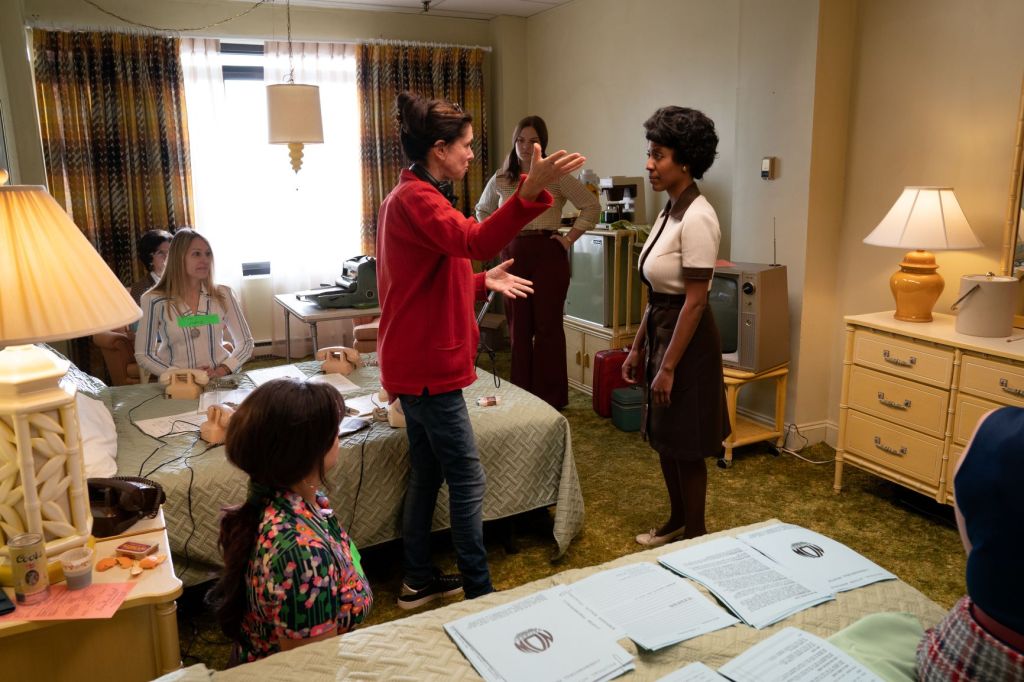