Juliet Nicolson on Chilly Mothers, the Literary Life and Alcoholism

Nicolson's book “A House Full of Daughters: A Memoir of Seven Generations,” explores her relationship with her mother Philippa. 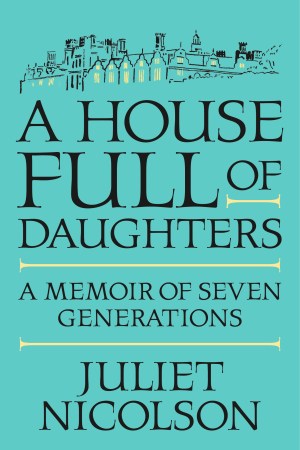 When Juliet Nicolson, whose antecedents include a variety of notable writers (from Alfred, Lord Tennyson to her grandmother Vita Sackville-West, and her father, biographer Nigel Nicolson), decided to write a book about her family, one of the things she wanted most to know was who her mother was. Not literally. But Philippa Tennyson d’Eyncourt Nicolson, who had been dead for 30 years at the time her oldest daughter began to research her life, was a mysterious, sought-after — and later highly toxic — force in her daughter’s life.

There are some wonderful yarns on the paternal side of the family. Juliet Nicolson’s great-great-grandmother was a gifted Spanish dancer named Pepita whose international dancing career made her the toast of Europe. She lived in Málaga for decades as the partner of Lionel Sackville-West, who eventually became ambassador to the U.S. from Great Britain. His daughter Victoria became his hostess, much sought-after for her beauty and charm — and often proposed to. Victoria married her cousin, another Lionel Sackville-West (otherwise known as Young Lionel) and had one child: Vita.

Nicolson’s book is “A House Full of Daughters: A Memoir of Seven Generations,” and it was released in June from Farrar, Straus & Giroux. When Juliet was eight months old, her mother went into the hospital, then moved back to her own parents’ house in the New Forest in order to treat the tuberculosis she had contracted. Later, her son Adam was born. Juliet’s father, Nigel Nicolson, stepped into the breach, taking care of his daughter before and after his son came along, with the help of a series of nurses in what Juliet calls “Carry On” uniforms and, later, a staunch nanny.

“I wanted to know why she kept on leaving, why she was so cold,” Nicolson recalls, speaking of her mother, Philippa. It appeared, as she writes in the book, that her own mother, Juliet’s grandmother Pam Tennyson-d’Eyncourt, didn’t like her daughter or care about her.

Her own parents, Nigel and Philippa, were incompatible, and her father was the one who held the family (which was later to include a sister, Rebecca) together. He was an intellectual who admitted later in an unpublished memoir that he had never loved his wife and that he had no interest in sex — and had in fact married simply because, as an M.P. in his late thirties who was single, he was considered to be in need of a wife; in fact, it appeared suspicious that he was not yet married.

Meanwhile, Philippa, a beautiful young woman, was baffled and angry that, after a certain point, her husband no longer wanted to make love to her.

Her husband found his bliss at his family house, Sissinghurst, and in the intellectual world to which both his parents had belonged. Philippa, whom he criticized for never reading a serious book or listening to classical music, found her own comfort zone in the South of France, hanging out with a friend of her parents, Dan Silberberg, who was considerably older than she was.

Her friend eventually introduced her to her second husband, Robin McAlpine, the chairman of the board of the company owned by his family, McAlpine builders, which had fabricated everything in England from the Dorchester Hotel to Wembley Stadium to the M-1 motorway. After divorcing Nicolson, Philippa found herself the mistress of many houses all over the world and with unlimited funds. But this didn’t make her happy, either.

As it turns out, Philippa became an alcoholic — a fate that, it appears, claimed her mother, who died at the same age, 58. Both Vita and her grandmother Pepita also suffered from the same addiction.

Juliet fell under the spell of alcohol, too, and she had a fight with the bottle that coincided with the ending of her marriage to her first husband, James Macmillan-Scott. They had two daughters, Clementine and Flora, who were becoming little New Yorkers, and he generously agreed to let her take them back to England. Juliet continued to drink, and her health began to be affected, but she went into rehab only when her brother Adam and his wife, Sarah, told her that they would go to the authorities to get custody of their two nieces if she didn’t do so.

“I think it was one of the most difficult things that Adam has ever done, and one of the bravest,” Juliet says. “It carried with it great risk. I was very, very close to not making it. I had vodka in my hot water bottle, for God’s sake.”

Her memoir is about the strange, often chilly, relationships between mothers and daughters in her family. Nicolson says that one of her intentions in writing the book was to change certain family patterns. In her chronicle, the men in the family are the nurturers, not the women. It was Harold Nicolson, for instance, who was the more emotionally accessible parent to his sons, Nigel and Ben, not their mother, Vita Sackville-West.

Juliet did go to rehab, was able to stop drinking using the AA model and slowly but surely remade her life. After having worked in public relations at Grove Atlantic in New York, she launched a writing career when she returned to London, becoming a journalist and writing four books. The first, “The Perfect Summer: England 1911: Just Before the Storm” became a bestseller in England. The second, “The Great Silence: Britain From the Shadow of the First World War to the Dawn of the Jazz Age,” is about the period just after World War I. Both synthesize a great deal of historical fact and archival research in a lively, readable style. Nicolson’s third book was “The Abdication,” a fictionalized account of the relationship of the Duke and Duchess of Windsor, with subplots involving other characters. She has taken over as family chronicler from her father, who famously wrote “Portrait of a Marriage” about his parents’ unorthodox union.

Juliet found love again, too. Her second marriage was to Charles Anson, a former press secretary to Queen Elizabeth II. She revels in having her first grandchild, Clemmie’s daughter, Imogen Flora.

Asked whether the life of a public intellectual such as her father Nigel— who frequently wrote for print outlets and published the occasional book, and made a living by doing so — will be available to the next generation who are inundated by social media, Juliet observes that, in the fall, her daughter Clementine is launching a children’s magazine called Scoop, which will be available solely by subscription. It appears that she has learned that children are tired of looking at screens all day and, when they come home, want to hold a magazine in their hands and sit in the garden and read it.
When asked about the women in her family, though, Juliet is off to the races. “Victoria [her great-grandmother] couldn’t work, but she could get her power through her rather wet father [Old Lionel]. She was not going to relinquish it by marrying some guy; she was batting away proposals all the time. She liked her position; she was in a really good position of power. Later, I had this sort of position. I was 13, and I was [her father’s hostess, as Victoria had been for Old Lionel], and we were having all these sort of macaroni cheese dinners [for his friends.] I’d never felt so valued and important, so valuable to a man, even if the man happened to be my father. [The women in her family], they can’t take it. [They’re all] bolters. Vita, she came back….There was another reason why she came back to Harold. She didn’t love him sexually. Everybody else in Vita’s life she rejected, it was Vita who broke off the relationship always, even with Virginia Woolf,” she recalls.

Juliet points out in her family memoir that Vita had affairs with as many as 50 women.

“Knole was the thing she loved, the building, but Harold was the person she really loved. He was a saint. I adored him, he was a wonderful person; he put up with a lot,” she says. “He was a wonderful father; he was the better parent.”

As for her family on the whole, “There is an eccentricity there, that is to be sure.”