The Oscar-nominated actress talks "Hard Lovin' Woman," the documentary that follows her rock and roll career. 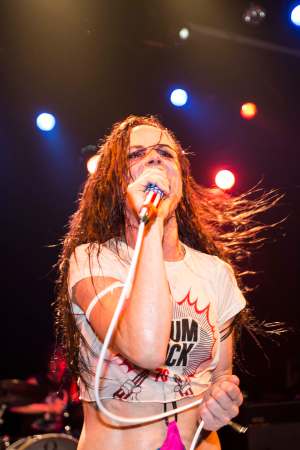 “I’m multitasking,” Juliette Lewis says over the phone from Los Angeles; in that particular moment, she’s driving to her boyfriend’s house while doing her WWD interview, but multitasking has otherwise been a running theme for Lewis throughout her career. In 1991, she rose to fame with her role in Martin Scorsese’s “Cape Fear,” for which she was nominated for an Academy Award. And while most other actors would commit fully to acting, Lewis knew she had to dually pursue another love: rock. Her career in music is documented in the short film “Hard Lovin’ Woman,” which premieres at the TriBeCa Film Festival on Friday and will be available widely on Red Bull TV starting the 23rd. Here, Lewis, 42, talks her passion for music and why pursuing it was so necessary to her.

WWD: How did the film come together?

Juliette Lewis: It came together really cosmic. Mike Rapaport, who I’ve known for 20 years,  directed it. I’ve always wanted to do a documentary; I’d been compiling footage of my band for 10 years. I sort of just wanted to showcase what life on the road was, and this is not that. This is a beautiful narrative that Mike found and he carved from spending time with me. It’s a really positive film, and that’s what I want to give to people. I want to make people feel inspired and excited about living. That’s what I’m always striving for.

WWD: How did you get started with music?

J.L.: I was one of those kids who sang and took dance class and gymnastics and tap and ballet. And that was the beginning of my storytelling and creating. It was all through music, dance and drama. My parents were key in facilitating that for me. Later when I [became] successful as an actor, I always missed this other aspect of who I was. So when I turned 30, and I was going through a divorce, it was huge; I was like I have no husband, no children, nothing to be holding me back from fully giving 110 percent to my artistic dreams. And so turning 30 was key. I put together a band and found my first major collaboration in this guy named Todd Morris and we formed [Juliette and] the Licks together.

WWD: How has performing live influenced your music?

J.L.: The thing with music that you’ll see in the documentary is that, for me, it’s always been about the live shows. Making records was secondary. I feel like finally now I make a really strong EP, but it’s always been about the live show, about the celebration and connectivity to other souls in the room through rock ‘n’ roll. And that’s the experience I want to have and so I toured religiously for, like, five years.

WWD: What are some of the most influential live performances you’ve seen?

J.L.: I went to this jazz festival when I was a young hippie, when I was 15. And I just loved it, I loved the culture of it, that you could bring all types of people together and release any negative feelings. I was already drawn to live performers like Tina Turner, The Who, Robert Plant, Chrissie Hynde, I got to open for the Pretenders for a month.

WWD: What made you decide to go solo in 2009?
J.L.: I had all the things that any band had when you tour too much and you kind of implode. Watch any documentary of any band; we all had the same thing. Except we didn’t have any drugs. I kind of approached music like an athlete, and I have a work ethic that I cultivated through making movies, where you work 16-hour days and you never take a sick day. So the way I approached tour was a bit hardcore. Now that I’m about to go on tour again I’ve built days off into the schedule so I don’t lose my marbles. I’m older in life and I know how to enjoy the experience a bit more. With The Licks, we always did kind of aggressive but celebratory rock, and I was really wanting to explore different types of songwriting that is not so traditional.

WWD: How have you balanced music and film?

J.L.: I never tried to do both. I either did music [or acting] full-on and it’s only now that I’m trying to navigate giving to both of these creative mediums. They both fulfill me and I love them but they require different parts of myself and I didn’t know how to navigate going back and forth. When I act, I’m working for someone and with a group, I work to help tell the director’s vision of a story. With music, I kind of am all of it. Director, writer, producer, performer. This is an independent self-fueled journey. I just want to have an extension of manifesting my vision.

WWD: In the trailer for the film there’s a line where you talk about how you find rock ‘n’ roll to be this rebellion from the sterile world of movies. Could you elaborate on that?

J.L.: I love that quote but I need to elaborate! Storytelling I love, but its a more cerebral medium, whereas rock ‘n’ roll, to me, is more guttural purging. It’s more emotionally loose. Movies, it takes at least 50 to 100 people to do this very technical medium. Rock ‘n’ roll is literally about emotion of song, and the ingredients are much smaller but the impact is so visceral. So I always talk about Neil Young guitar solos; you can hear three chords of a song and it’s an instant feeling and there’s a whole story and sentiment in like, 10 seconds of his guitar playing. It’s also a rebellion with the way I look, the way I sweat on stage. Aesthetically, rock ‘n’ roll suits me quite well because in movies, the one thing I did revolt against is this very saccharin, stylized fantastical presentation of oneself. I always wanted to present something very soulful and real and tangible. For me in rock music, it’s more of who I am in that sense.