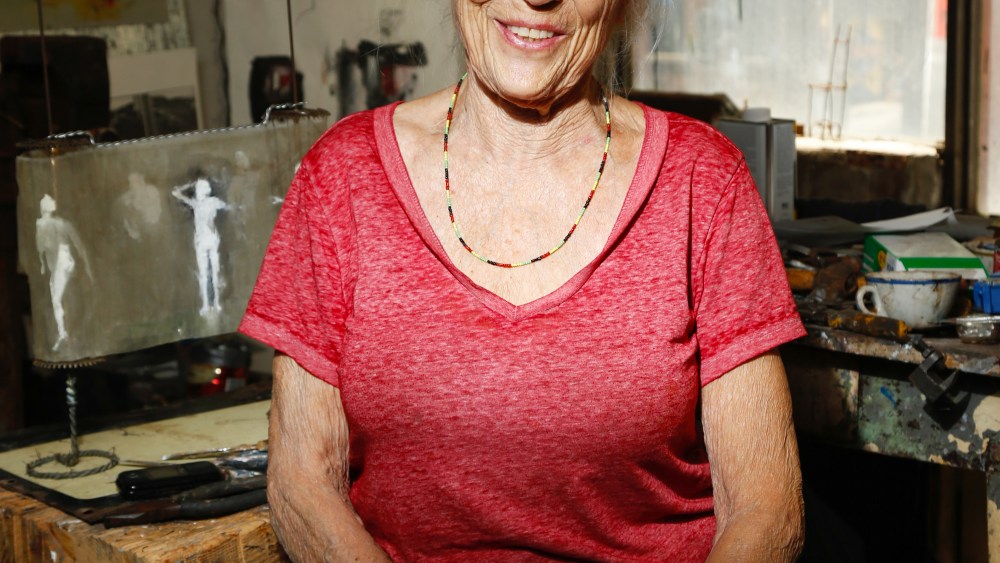 Everyday is a day worth working for the artist June Leaf.

Her studio’s dilapidated, paint-stained floorboards are proof of decades spent toiling there. Draftsman tables are strewn with cranks, tools, eggbeaters, hand-operated sculptures and antique sewing machines. In a back room, scads of drawings, paintings, prints and sketches are stowed away in a rusty filing cabinet. “Are we still in New York?” is a legitimate question for visitors to consider, but Leaf makes clear that her version of the New York artist’s life is counter to the stereotypical, Champagne-flute-clinking one.

Low-profile about her wide-ranging body of work, Leaf’s identity is often boiled down to three words “Robert Frank’s wife.” But two New York shows of her complex work stand to change that — “June Leaf: Thought Is Infinite” at the Whitney Museum of American Art, and “June Leaf: A Survey, 1949-Present” at the Edward Thorp Gallery. Both are a melange of painting, sculpture and drawings on view through July 15. “I thought today I should talk about it. I should announce it. I should not run away and say, ‘Oh, she’s married to Robert Frank. Yes, she’s married to Robert Frank and she’s still going.’”

In a thin red scoop-neck T, black pants and flip-flops, her cheeks still rosy from the previous day’s four-mile round-trip walk to the Whitney, Leaf said she took a hands-free approach, leaving all of the selections to the curator Carter Foster. “I didn’t go out and say, ‘I want to make a show. It’s at The Whitney [outstretching her arms for effect]. It was not like that at all. I just let a creative man come in and be propelled by what moved him. And I’m very happy about that,” she said. “Doesn’t that sound kind of special in the art world, which is so full of concern of what people think of you and whether you made an important painting or what moved you? I just liked that this person was touched, I left him alone, and I just kept working.”

“Many people said, ‘God, that was courageous of you not to be part of the choosing of the work.’ Then courage is part of being an artist. Isn’t it about taking chances? Where would we be if we didn’t take chances? We wouldn’t be who we are,” she said.

Asked for her own critique of the Whitney show, Leaf said, “There’s a lot that goes into my drawings and that’s what I saw. I thought, ‘Well, if all else fails this is a person who is looking for something, and it takes her a long time to get there but she gets there.’ There’s nothing decorative about it. It’s a search. You can see that I’m searching. I realize that I don’t see that often in paintings. You see it in writing. Or maybe sometimes in the choreograph in a dance where the dancers are portraying some evolution of their souls. I thought if all else fails this person is searching.”

She’s not kidding. During a lengthy interview last week, Leaf repeatedly sprang up from a wobbly wooden chair to dig up a painting, photo or widget to better illustrate her points. Lugging an antique Singer sewing machine across the room, Leaf said her physical therapist thinks she moves like someone who grew up on a farm. (She didn’t, but she does.) That physicality helped her rebound quickly from a broken hip in November, Leaf said. Grasping how the body moves was something she took to, studying ballet as a child. Movement and flight recur in her work, always drawing her figures in space, which means they can move. “So when I draw I am dancing,” Leaf said.

The work ethic of her mother — the family breadwinner who wasn’t above hauling cases in her father-in-law’s tavern and liquor store — seems instilled in her. “My mother was a working woman and she worked really hard throughout my life. My father was a very wonderful man, but he just wasn’t practical. He just couldn’t manage to work hard, so his father appointed my mother to take his place,” Leaf said.

Leaf met Frank through his first wife, Mary, a fellow artist who had asked Leaf for help finding a new gallery. Invited to a housewarming event for the couple’s daughter, Andrea, Leaf said of that first exchange, “I looked at him and I thought, ‘Oh, there he is. He’s more raggedy than I thought he would be; he’s more arrogant than I thought he would be. He’s married, and I am so happy that he’s married because that is a very difficult man.’ That’s exactly what I thought. I just walked away from him. He tried to talk to me. I just didn’t like the way he approached me as a woman. This is kind of private. It’s nice, it’s true and it’s life.”

The reality of being married to perhaps the seminal photographer of our time comes with a certain amount of invisibility and fortitude. Steidl has published his book “The Americans” eight times, and the couple was recently in Switzerland for a pop-up exhibition that was shredded afterward so as not to be too precious. “When we sit outside, people walk by and practically get on their knees. And I understand. I think I understand better than anyone. We are at these crossroads in time. It’s like when they invented the printing press. All of a sudden people could read books and they didn’t have to listen to what the priests said. Everything was accessible to people. Well, photography is the same revolution. All of a sudden everybody is empowered, and they need it, in the way they needed books. And Robert is the one that elevated that creative process to the level of art.”

Leaf continued, “I’m up to it. I guess that’s what I want to say. He doesn’t make it less for me. He puts right under my nose — the kind of challenge a painter is facing everyday.  It’s right there. And I feel really good. I’m strong enough to be empowered by it but not threatened by that. I feel that’s fate.”

Asked if they discuss their work, Leaf said, “Never. It’s like, it’s not important.” They are more inclined to talk about the blue jays building a nest in the ailanthus tree of heaven outside her studio window, or the “who’s healthy, who’s not” game that inevitably comes with age. But at 86, Leaf is looking forward, as she always has. Holding a collage from 1949, she said, “I was only 18 years old. It’s the Chicago Tribune and I see it as a castle.” Certain of her calling, she was up-and-out of the Bauhaus School after only three months, moving to Paris for five months of self study, gleaning from Paul Klee, Mark Tobey and others. She met Buckminster Fuller in her school days. She took to graffiti in the Forties, started drawing robotics in the Seventies including the 1975 watercolor “Computer Woman in Landscape.” When Frank was working on a film about the Rolling Stones’ 1972 American tour, “Cocksucker Blues,” she gave him a small Polaroid camera and he started writing on the photographs as she is known to do. Asked about the legal dispute around the unreleased documentary, she said, “I guess they didn’t like that drugs were shown.”

Another Frank-shot film, “Keeping Busy,” featured Richard Serra and a battery of other artist friends was shot in Cape Breton and unknowing to the cast was meant to be a spoof. The one-pub town of Moab is home, despite buying a former four-floor flophouse on The Bowery for $40,000 decades ago. Determined not to be typecast as summer people, Leaf said she insisted they live there full-time. “I had seen what happened in East Hampton,” she explained. “When I met Robert, it was like we started a new life, and we left New York. I felt like I was finally with the love of my life. I don’t know how advanced he was along those lines, but I had enough for both of us. Art was behind me. It was like, ‘Now maybe from this you make art.’ This is the right person. It’s not from art that you make art.”

Gesturing toward a black-and-white photo of a waterfront salt box, she said, “That was the day we bought it. I’m on the roof making a new one.” Tough as it was to adjust from the fast-paced city life, Leaf said becoming enmeshed in the community made all the difference and their art flourished. The Swiss-born Frank was ready to cast aside the tough wildness he’d learned as a Beatnik. (Chalking up her own non-Beatnik status to “I’m from the Midwest!” she laughed recalling how she has “a very good painting” of Allen Ginsberg in the buff. “He wanted me to and I wanted to.” she said.)

Her own standing in the art world, and influence on others, is something that she doesn’t consider. “Maybe I don’t want public acclaim. I want to survive with that integrity that is so precious to me. The fact that I could make that drawing [gesturing toward an easel with “On the Pain of Growing a Wing”] made me think ‘Oh good, you’re still a scientist who can invent something that goes with your life,’” Leaf said. “I guess I just want to live right. Living right is very important — loving right. It’s not that I’m such a great humanitarian or lover, but in my world, there is a right way to live with someone. That’s all.”