Justin Thomas on His Ralph Lauren Capsule, His Injury and Tiger

The collection will launch for the U.S. Open tournament at Pebble Beach in June.

Justin Thomas in a look from his golf capsule with Polo Ralph Lauren.

Justin Thomas has spent a lot of time in front of the television the past couple of months. The number-five-ranked pro golfer has been sidelined by a wrist injury and has had to withdraw from some tournaments lately, including the PGA Championship this past weekend at Bethpage Black in Farmingdale, N.Y. But he’s been keeping busy working with Polo Ralph Lauren on his signature capsule collection that will launch for the U.S. Open at Pebble Beach in June. The lineup of polo shirts, outerwear, pants, vests and hats, is grounded in a palette of red, white and blue and offers Coolmax temperature-regulating yarn and a star camo print on knits. The line, which features a slim, modern fit, ranges in price from $49.50 for a hat to $168 for outerwear. Thomas visited the Ralph Lauren flagship on Monday to offer a peek at the collection, visit with shoppers and talk about his return to the game.

WWD: You had to withdraw from the PGA Championship this past weekend. How’s your wrist?

JUSTIN THOMAS: It’s good. I was more bummed and disappointed because it’s a place I love and it’s a major championship, but wrists are pretty important in our sport, so I’m willing to take however many events necessary for it to heal and make sure it never comes back again. You see quite often people rushing back and they wind up hindering their season or their career — and I’m too young to do something like that. I’ve been doing everything I can to be sure it’s ready and it’s getting close but unfortunately, you have to give it time to heal, and we’re almost there. I see the light at the end of the tunnel.

WWD: Do you think you’ll be back for the U.S. Open?

WWD: Did you watch the PGA?

J.T.: For sure. I had some stuff to do, worked out at the gym, got some food and made sure I was in front of the TV — that’s something I’ve done a lot the past month and a half — and watched the entire day. I felt like I knew Brooks [Koepka] was probably going to win, but with that wind, it had the potential to get close. I didn’t think it would get that close — I thought it might be two, three, four shots, especially with the back nine there. It was good to watch. I don’t know if he’ll admit it but I think it’ll probably be better for Brooks because it’s easy to win when things are going well, but when it gets tough, he really had to manage his emotions those last four holes, which are four of the most difficult finishing holes he’ll probably play all year, so playing to make sure he got a win was pretty big.

WWD: With the layoff you’ve had, are you feeling good about your chances at the U.S. Open?

J.T.: It’s four weeks away, and I never know where my game’s going to be, but I feel confident like I do with most tournaments. It’s been a while since I’ve played in one, but I’m excited. It’s going to be my first major at Pebble Beach. I’ve played there before but never during the summer. It has the opportunity to be very difficult, but it’s a great test and I’m looking forward to it. When you have beautiful weather there, it might be the best place in the world. It’s about as good as it gets for a venue for a U.S. Open.

WWD: What do you think about Tiger coming back to win at The Masters?

J.T.: It’s only my fifth year on tour but it’s great for the game of golf. You have a lot of us young guys playing and with one of the best of all time being back and playing competitively, trying to give us another one of his runs and show us a thing or two, we’re all welcoming the challenge and want to show him what we have. There are so many other young guys coming out that are winning, so the tournaments have a great buzz to them, a lot more fans are coming out and a lot of kids who are young enough to not know who Tiger Woods was are seeing him play and win again. It’s great.

WWD: Not that long ago, golfers had a reputation of not being in the best of shape, but that’s changed today. All the young players really take care of themselves.

J.T.: We treat the game a lot more seriously these days. 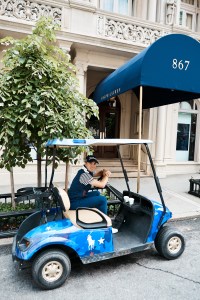 Justin Thomas in a special camo-printed golf cart outside the Ralph Lauren store.

WWD: Ralph Lauren doesn’t partner with a lot of people, but they collaborated with you on a golf capsule for Polo Golf. How did you put your mark on it?

J.T.: It was very fun. I love fashion and I love clothes and I’ve been fascinated with it the last couple of years. As golfers, we do a lot of traveling and see a lot of different places and people and cities where there are different trends. For me, I’m playing so I’m in the clothes all the time and I know what’s most comfortable, what I like best and the styles I like to wear that could potentially set a trend or get people to like something. The process is very fun and I was excited when we got brought the idea. 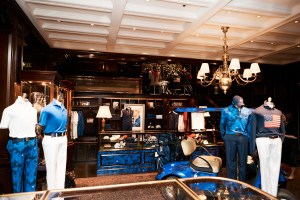 The Justin Thomas capsule was front and center at the Ralph Lauren store.

WWD: Do you have a favorite piece?

J.T.: I really love the sweater with the American flag, and the camo print is really, really cool because it’s so easy to do a camo print and a lot of people are into that, but with the U.S. Open and the red, white, blue American theme and having the off-colored stars, it’s a really cool piece.

WWD: Do you wear a lot of Ralph Lauren off the course as well?

J.T.: I do. That’s what’s good, they have ath-leisure wear and I also like to dress up — I don’t get the opportunity to do it very often but if I get the chance to wear a suit or a jacket, I will. I definitely have my fair share of Ralph Lauren suits so when I get the chance to sport them, I do. They can be very classy and elegant and they also have great casual stuff with their T-shirts and swim trunks. They cover all spectrums in terms of fashion.