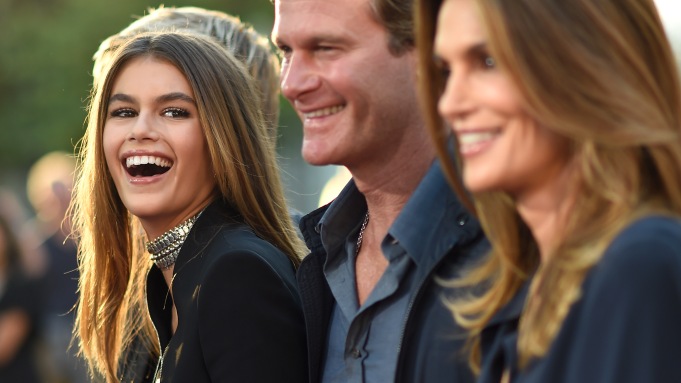 Kaia Gerber, who made her acting debut Wednesday night at Lifetime’s “Sister Cities” screening, may have one of the world’s most recognizable faces due to her resemblance to mom Cindy Crawford, but she’s only beginning to get her feet wet when it comes to talking in public. She is, after all, just a few days shy of 15 and has thus far lived a fairly “normal” life in Malibu — the occasional Versace ad, magazine cover or Hollywood party aside. Gerber took a few minutes to chat with WWD about what it’s like to have a supermodel mom.

WWD: How does it feel to have your first acting gig under your belt?
Kaia Gerber: It’s kind of been a whirlwind. We started filming last summer. I had been auditioning since 11 years old and I was really into it. I got the role when I knew Stana [Katic] was doing it. And we do look a lot alike. I just saw the film, and for it to finally come together…it’s amazing.

WWD: Was there a particular facet of the filming experience that you really enjoyed?
K.G.: I think how much the cast has bonded. You become really close. When you’re filming you really do become like a family and I think it’s amazing.

WWD: What’s one thing that we wouldn’t be able to guess about you?
K.G.: I still get super nervous. I’m not used to this at all. I think people think I do this all the time, but I’m just a teenage girl.

WWD: You’ve been on the cover of Vogue with your mom, but how do you keep your teen years normal?
K.G.: I go to school. I was at school today. And I do everything that all the other people in my town do. I don’t let this affect me at all. I keep my business and this part of it separate even though I have so much fun in both.

WWD: What’s it like to have Cindy Crawford as a mother?
K.G.: It never felt like Cindy Crawford was my mom, because she’s always been mom. I feel like when she is “Cindy Crawford,” she’s not my mom, but when she’s at home she’s a normal mom. She’s definitely taught me a lot and helped me get through all of this.

WWD: In what way has she helped you?
K.G.: She gives me tips about being on time, but she also lets me do my thing, which is cool.

WWD: Your modeling career is blossoming with your first solo cover for Pop magazine and working with brands like Moschino. What’s been your favorite fashion moment so far?
K.G.: I just think when my mom and I were both on the cover of French Vogue. I never thought I’d ever do anything like that, especially not when I’m 14 years old. That’s when I was like OK, “We do really look alike.” I see it.