The model celebrated her entry into fashion design with the launch of the Karl Lagerfeld x Kaia capsule at the Revolve Social Club. 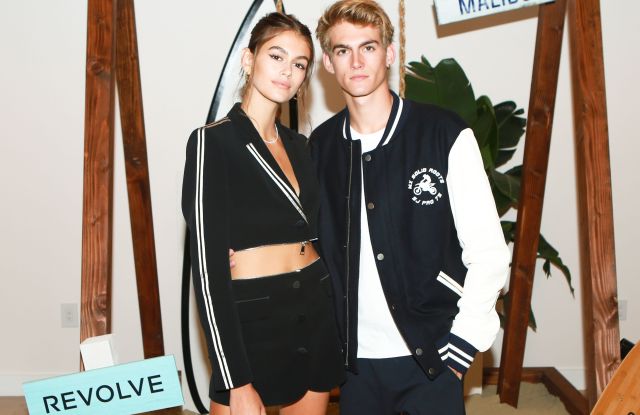 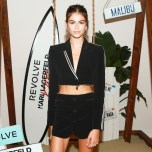 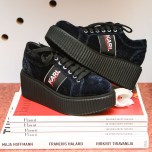 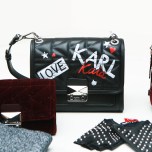 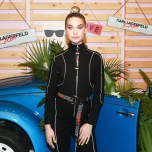 LOS ANGELES — Kaia Gerber stood on the second floor of the Revolve Social Club warmly gesturing to seats, a stuffed plush cat on a small end table between two chairs.

“It’s Choupette,” Gerber said, smiling. “That’s Karl’s cat. He couldn’t be here so he got his double.”

The 16-year-old model, daughter of Cindy Crawford, was on hand Thursday evening at Revolve’s VIP clubhouse on Melrose Avenue for the first of three events celebrating the launch of her foray into fashion design via a collaboration with the Karl Lagerfeld brand.

The capsule also marks the largest collaboration for Karl Lagerfeld, with a California-inspired line that includes a bodysuit, crop tops, motorcycle and tuxedo jackets and leather miniskirt and accessories, among other items bearing the Karl Lagerfeld x Kaia logo.

“I definitely just wanted to make sure that it felt authentic to me and my personal style and also to Karl and his personal style,” Gerber said. “That was our main focus, taking both of our aesthetics and having them meet, and it actually worked out in a really natural and beautiful way. There’s a lot of that California, laid-back style and then a lot of that chic, Parisian style. You’ll see a lot of that in the collection.”

The pieces retail from $35 to $1,045 and launched Thursday on Revolve and karl.com. The two online shops will carry the collaboration exclusively for the next two weeks, with the Revolve Social Club also open to the public this weekend for a pop-up selling pieces from the capsule.

“I’m so grateful that Karl sees things the way I do where we didn’t really want to stick with trends with this,” Gerber went on to say of the approach to building the capsule’s pieces. “We wanted to keep it classic, and that’s how I dress. I’m not a very trendy person. I live in a leather jacket or a blazer or a little black dress, and I think Karl really understands that about dressing women and dressing people in general, so we did a lot of basics, but our own versions of it.”

Gerber pointed to her own outfit comprised of pieces from the collaboration — a blazer that converts into a cropped jacket and skirt. She also pointed to the capsule’s leather jacket, which she said she’d pair with a little black dress and accessories.

The yearlong process, she said, proved an eye-opening experience.

“Being a model, I feel like you see part of the behind the scenes, but you don’t really see the whole design process because when you get there, the clothes are ready for the most part,” Gerber said. “So, actually, I have a new appreciation for what designers do and all of the hard work and time that goes into making a collection. I don’t know how Karl does what he does. It’s really insane to me. Even just doing this, I was really in shock at how much time and effort goes into it, but I definitely think that the payoff is so much bigger than that.…I remember when I saw the first sample, I was like, ‘Oh, my gosh.  We’re actually making real clothes that you can touch and feel and put on.’”

Gerber said any chance she has to be creative and also learn new skills, she’ll take, adding she’d be open to doing more designing in the future.

Following the Revolve event, the festivities around the capsule head to New York on Sept. 12 for a meet-and-greet with Gerber at the Karl Lagerfeld Paris store on Broadway. It culminates Oct. 2 in an invite-only event in Paris with Lagerfeld and Gerber in attendance.

In the meantime, Gerber next turns her attention to New York Fashion Week, saying the break she’s taken more recently has helped in her preparations for the upcoming month of shows.

“I’ve been getting a lot of sleep,” she said. “This is actually the first time I’ve worked in months. I took the whole summer off so that’s been amazing. I think it’s just about mentally preparing yourself, not getting too stressed out about it. I try not to look at my whole month’s schedule because that’s a bit terrifying. I take it day by day and show by show.”