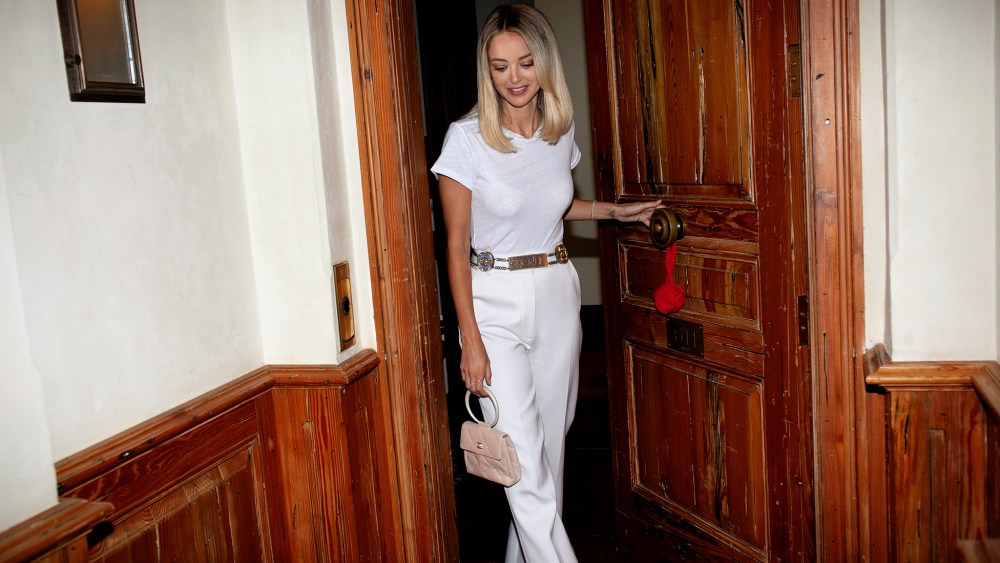 It’s just shy of 9:30 on Tuesday morning and Kaitlynn Carter is sitting in a robe in a two-floor suite at the Greenwich Hotel, a spread of green juice and granola in front of her and a hairstylist busy at work on her blonde bob. Her rumored love interest — that would be Miley Cyrus — is in the bedroom upstairs, having attended the Tom Ford show the night before. Carter is just beginning Day Two of her NYFW; she started with Jonathan Simkhai on Monday before popping by Derek Blasberg’s party for YouTube and YSL’s beauty bash with Dua Lipa. This morning it’s onto Vera Wang, who is celebrating her 30th anniversary season; then Christian Cowan and Naeem Khan before she and Cyrus are due back in Los Angeles.

Carter, who appears on the reboot of MTV’s “The Hills” alongside her ex Brody Jenner, is in charge of her own makeup, as she prefers it. She gets to work in the bathroom creating a subtle daytime look, dressed in a white lace bra and the ivory David Koma trousers she’ll wear to the Vera Wang show (paired later with a white T-shirt bodysuit by Re/Done and white pumps). The second bedroom off the side of the bathroom doubles as a walk-in closet for the trip: heels from Alexander Wang and Prada line the wall with flats from Fendi and a trio of white sneakers. Spirals of belts are laid out on the table, options of leather and denim minis hang from a rolling rack; in the hallway, a rust Chanel T-shirt dress hangs over the mirror with the silver Chanel belt Carter will pair with the all-white look.

Carter has been coming to New York Fashion Week for four or so years, she says, “although I’ll skip a season here and there.”

“For me, it’s always the opportunity to catch up with those I only really see in this setting,” she says. “I’ve made such great memories with all of these people over the years and love catching up and finding out where their lives have taken them.”

The reality star, who describes her styles as “not overcomplicated” and “feminine but comfortable,” will launch a beauty tool this fall within her skincare line, Selfé. “We are in the process of testing that technology and hope to see it move forward to completion this fall,” she says.

Once dressed, she heads upstairs to show Cyrus the look and get her opinion on a small blush Chanel bag; meanwhile, Cyrus’ small dog Bean is let into the room by a dogwalker, having tagged along for the trip from L.A.

Cyrus then comes downstairs, dressed in cobalt track pants and a cutoff white ribbed tank, carrying a coffee mug. “Hello, good morning, what’s going on,” she says with a grin as she passes, joining Carter in the downstairs bathroom. The pair are one of the most — if not the most — watched and talked about celebrity duos at the moment, but in their hotel suite they’re incredibly relaxed, casual and domestic with each other. Cyrus asks Carter the location of their room key as Carter gets ready to head out to Vera Wang, joking that she might not be there when Carter returns.

“You don’t know if I’ll be here when you get back — maybe I’ll be having lunch with some of my friends,” Cyrus shouts to her, the implication being that she will very much still be there. And for their flight back to Los Angeles? Discussing their respective NYFW runway favorites, we’re sure.