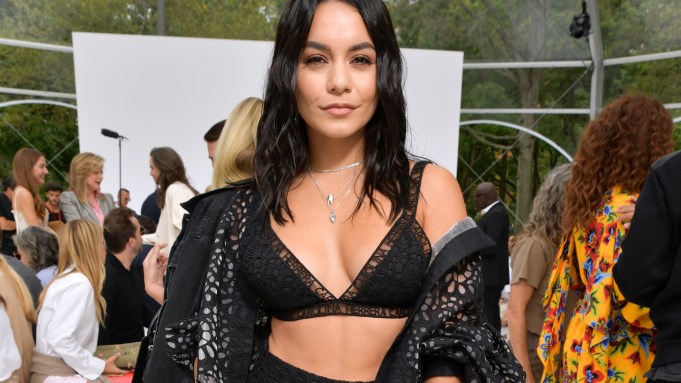 Vanessa Hudgens thinks so. She attended Carolina Herrera’s Monday morning runway presentation, held at Battery Park, along with Karlie Kloss, Janet Mock, Martha Stewart, Linda Cardellini and Carolina Herrera herself. Hudgens, amid floral prints and neon skirts, wore all black as tribute to the character she’s working on for an as-yet-unannounced film.

“It’s indie, it’s dark, it’s twisted,” she said. “I go in cycles in my career where I’ll have my dark, twisted, indie moment: when I did ‘Gimme Shelter,’ ‘Spring Breakers’ and ‘The Frozen Ground’ all back to back. It was like, ‘I gotta come out of this dark void of a life and see the light, and lean into the comedies.’ And now I’m back to wanting to edge it up a little bit.”

Edging it up, for Hudgens, means doing research about anarchist feminists.

“I’m reading the ‘SCUM Manifesto’ [by Valerie Solanas,]” she said, referring to a text published in 1967 that posits the world has been ruined by men and it is the responsibility of women to overthrow society and eliminate the male sex in order to right it. “It’s shocking, at times, how she had these extremely strong points of views and beliefs. But it’s the bible for my character right now.”

This is the first show Hudgens has attended this NYFW (how has she possibly managed to stay away?) and her plans for the duration of the festivities are somewhat limited.

“I think I’m going to Vera Wang, and I’ll probably pop by Fenty,” she said. “It’s exciting, but it’s a lot, and I tend to be a bit of an introvert — so I like watching the shows from the comfort of my couch on my computer.”

Immediately following the Herrera show, the “High School Musical” actress said she would be retreating to her home.

“I might go pick up the dry cleaning,” she said.