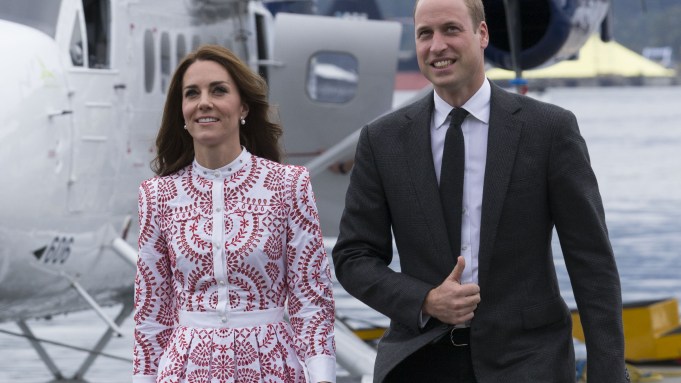 FAR NORTH FASHION: The Duke and Duchess of Cambridge’s eight-day Canadian tour is shaping up to be one smiling photo-op after the next. While the journey is being done in the name of diplomacy, the couple and their hosts Prime Minister Justin Trudeau and his wife Sophie Gregoire Trudeau certainly make a case for families.

Prince George and Princess Charlotte have been biding most of their time under their nanny’s watchful eye back at Government House in Victoria, while their parents see to their numerous appearances. Royal watchers and Trudeau followers alike have already had a number of designer looks to critique.

After arriving in a cobalt blue Jenny Packham ensemble Saturday, the Duchess switched things up Sunday with a bolder Alexander McQueen dress. Gregoire Trudeau greeted the country’s guests of honors wearing an Edition des Robes dress, a hat from the Saucy Milliner and Hudson’s Bay shoes Saturday. The following day she sported a rust-colored lace-trimmed dress from Tanya Taylor, a Toronto native now based in New York. On both occasions, jewelry from Anzie were her finishing touches.

Monday is primed to be an adventurous day for the Royal Couple, starting with an aerial tour of the Great Bear Rain Forest. Afterwards, they will visit the Heiltsuk Community where they will receive a traditional welcome ceremony. The athletic couple will then walk to the Elders Lounge where William will make a dedication on behalf of the Canopy initiative. Their next assignment will require boarding a boat for a cruise on McLoughlin Bay.

But the Duke and Duchess will be due back in land in time for a quick change for Monday night’s reception at Government House. Whether or not three-year-old Prince George or 16-month-old Charlotte will stay up a little late to greet the Trudeaus again remains to be seen.