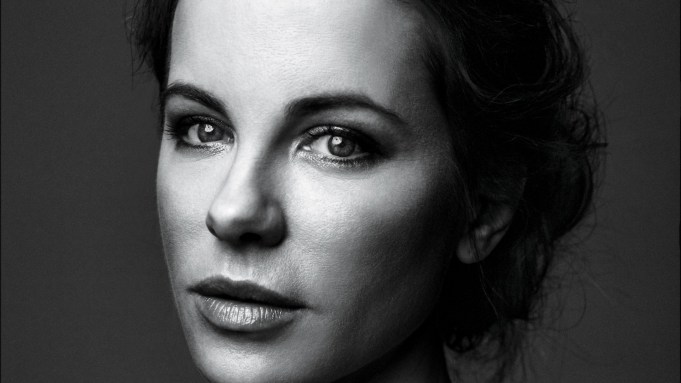 Kate Beckinsale is back in a big way. The Oxford-educated British beauty, 42, began her acting career in 1991 with period films across the pond before finding Hollywood fame in American blockbusters such as “Pearl Harbor” and “The Aviator.” Along the way, she became a fanboy fantasy as the vampire Selene in the “Underworld” franchise, which spawned three sequels and a fourth that just wrapped. After some years of similar actioners (“Van Helsing,” “Total Recall”) and little-seen, smaller-budget fare, Beckinsale reclaims the spotlight in her natural habitat, teaming up with her “Last Days of Disco” director Whit Stillman as the star of his wickedly funny Jane Austen adaptation “Love & Friendship.”

Playing Lady Susan Vernon, the scandalous antiheroine of one of Austen’s early epistolary novellas, “Lady Susan,” Beckinsale sinks her teeth into one of her juiciest roles yet. Her character, a widowed and suddenly penniless noblewoman with a teenage daughter, must navigate the refined yet treacherous social waters of 18th-century English society as she seeks to secure futures for herself and her daughter. Beckinsale nails it, in part because she’s returned to her wheelhouse, and also because of Stillman’s skill at combining nuance, lush settings and biting humor to draw engaging performances from his actors.

The early reviews from the Sundance Film Festival, where the film premiered in January, were positive, and the independent film, which hit New York and Los Angeles theaters on Friday before opening around the U.S. over the next two weeks, has also made the city festival rounds, where audiences have been laughing and gasping in mock horror and delight, Beckinsale right along with them.

“Normally, I never see my movies more than once. I watch it, have a nervous breakdown, leave it for 10 years, and possibly revisit it,” she says in her low, slightly throaty voice, which — combined with her posh accent — makes the delivery of such statements both funny and endearing. “But I think I’ve watched this one four or five times since November, which I think is a record. It’s been such a surprise of a comedy to people; it’s lovely being in the audience hearing people laughing. I think their expectations of what the Jane Austen humor is going to be are really shattered.”

Stillman, who writes all of his own scripts, took almost every one of Beckinsale’s lines directly from Austen’s novella, only taking creative license with one of Lady Susan’s particularly hilarious suitors. “When I first read the script I thought, ‘She’s so naughty and extreme, is this really Jane Austen or just Whit writing in the style of Jane Austen?’ Then I was like, ‘Did he write this for me? Is it the present-day?'” Indeed, the character suits Beckinsale, who in real life is as bookish as she is beautiful, with a naughty sense of humor and a knack for delivering even the most bawdy zingers with panache.

Beckinsale, who shifts sideways in a director’s chair inside the WWD photo studio, throwing both bootie-clad feet over one of its arms, says the chance to work with Stillman again was part of the project’s appeal. “I first worked with Whit on ‘Last Days of Disco’ 18 years ago,” she says of the cult film, in which she and Chloë Sevigny, (also in “Love & Friendship,”) play young book editors in Eighties’ Manhattan. “He had been the first person to ask me to do a movie in America with an American accent. It’s really hard to convey how completely irrelevant and alien America was to me at the time. ‘Disco’ was an incredibly specific little strata of New York society, which obviously I was super unfamiliar with, so I was absolutely a fish out of water.”

Stillman had started working on the “Love & Friendship” script in 2004 with Beckinsale in mind, but she was too young to play a woman Austen described as “‘a beautiful young mother of 35 who looks 10 years younger.’ Now, that description pretty much calls for Kate Beckinsale,” Stillman said. He also praised her varied work since “Disco.” “She’s good in all these realms. I think she’s really updating what it is to be a movie star. It’s not an accident that [Martin] Scorsese cast her as Ava Gardner [in ‘The Aviator’]. If you want the aura of old-fashioned stardom, Kate is going to have that.”

That project led to American art house films such as “Brokedown Palace” and romantic comedies such as “Serendipity” before she met ex-husband Len Wiseman, who directed the first two “Underworld” movies. “I found myself holding machine guns and it was a bit of a surprise, so the fact that it was Whit who dragged me here in the first place, and he’s now the one who put me back in Jane Austen, is lovely. He’s got such a relish for the naughty woman and I love that because it’s so fun to see that onscreen. He’s also so intelligent and elegant and well-read, just absolutely my kind of person,” she says.

When asked if being a mother to 17-year-old Lily, her daughter with ex-partner Michael Sheen, informed her role as Lady Susan, she says, “I’m nowhere near as mean to Lily. I think Morfydd Clark’s [who plays her daughter Frederica Vernon] character is much more meek than her mother and they seem not very similar for a lot of the movie. I feel my daughter and I are much more similar and she’s a very feisty human being.”

In one of the more serious moments in the movie, Lady Susan schools her daughter on the necessity of making a good match, the only option available to society women at the time. “There is shared female experience in that, which, when I was researching the movie, made me go, ‘My god, women then had no education, no plans for a career….There’s all this period literature about deep love, but actually it’s about ‘will I be able to survive and will I starve to death?’ It was very informative in terms of the part; she’s not just having fun [with men], she really is trying to lock down the future.”

Of leaving action behind to get back to literary period pieces (she majored in French and Russian literature at Oxford), she says, “It’s quite weird when the thing you do as a stretch is what people start to associate you with the most. I’ve done 50 or so movies and only four of them are ‘Underworld’ [movies], which is quite a small number, but you realize a lot of the indies don’t inflame peoples’ consciousness in the same way. With hindsight, it makes sense. People are not dressing up like Lady Susan for Halloween — yet,” she says.

Her next project is also a return to her academic roots: She’s cowriting a film with screenwriter Emma Forest, based on a novel she optioned two years ago. “It’s another quite naughty woman and the story has a dark quality. She’s an heiress with teenage daughter and it’s about their relationship.” Set in the late Seventies and early Eighties, Beckinsale will produce and star in the project. Of writing her own material, she says, “I’ve been threatening to do this for a really long time and being a mother, and quite often a single mother, as well as having this movie career, I just haven’t had the stability and quiet I need for writing, but I was always planning on writing as well as acting. There’s been a little hiatus to launch a human being.”

One benefit of becoming a mother at a young age is that she, like Lady Susan, is entering her prime as her child becomes independent. “It’s kind of nice to be like, ‘Oh, I’m not in a nursing home, and I have a little freedom.’ It’s not that there is not parenting to do, because there is a sh-tload of parenting to do when you have a teenager, but it’s a very different sort of thing.”

Another benefit of having a teenager: She now has a way of getting around Los Angeles, where she’s been based for the last decade. “My daughter has passed her test and is driving and I’m still without a license. Now I’ve got someone at home who can drive me. When I get in the car I go, ‘Now I realize the purpose of you being born,'” she pronounces, before adding, in all seriousness, “Life’s short, have fun.”