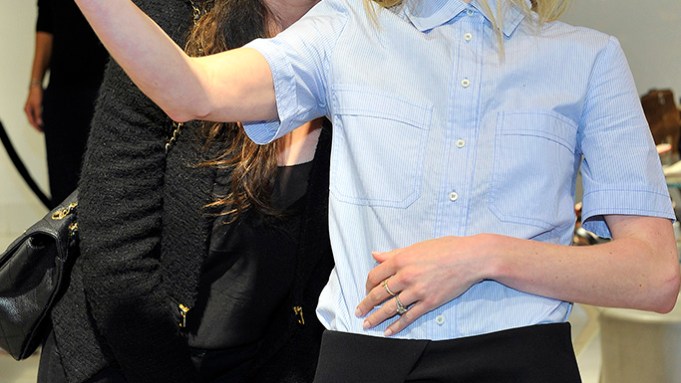 Wandering through a shoe department, one usually hears innocuous comments along the lines of “Do you have this in my size?” and “That’s so cute.” On Wednesday, while promoting her new shoe collaboration with Matisse Footwear at Nordstrom in Los Angeles, Kate Bosworth took a step further to delve into some deep issues.

“What is value really?” asked the actress clad in a Vanessa Bruno button-up and miniskirt, which she paired with black flatforms from her collection that launched a month ago. Gesturing to ankle boots adorned with a constellation of metal stars around the heel, she continued, “The ‘Charlotte’ for example is $500. And some people might go, ‘Wow, that’s too much for me.’ And some people would say, ‘I don’t care. I have to have them.’ It’s interesting, as people, what we place value on and in different ways.”

Fortunately for Bosworth, numerous women have been coveting her designs that are produced by El Segundo, Calif.-based Matisse and sold at retailers such as Nordstrom, Bloomingdale’s, Macy’s, Revolveclothing.com and Singer22.com. In fact, the tan suede boots covered with stars sold out in 24 hours while the black leather version went out of stock in 36 hours at several stores across the country. Multiple retailers can’t keep inventory of the $389 buckled mule, aka the “Judith.” The brisk sales surprised Bosworth.

“You hope people respond to it,” she said, “but I didn’t have any expectations of it being that quick.”

Even Nicole Harbey, who came to help her 11-year-old daughter, Alexa, snag a selfie with Bosworth, was contemplating trading her Birkenstocks for the boots. “I have five kids,” she said. “I do flats.”

Other people who waited in line for a chance to meet Bosworth included a young man with sun-bleached surfer hair that fluttered under the air-conditioner and a bespectacled woman cuddling her sleeping infant in a Baby Bjorn. Bosworth’s mother even showed up at the Grove, and subsequently on Twitter, posing with a red mule. Mama Bosworth deserved credit for some of the admiration directed toward her 32-year-old offspring.

“She’s always put together,” said Remington Rebeil, a 23-year-old stylist, glancing at Bosworth while waiting in line. Added her older sister, Paris, who’s a law student: “She’s also a beauty icon. Her makeup is natural, which is an influence to young people.”

True to her reputation, Bosworth shared skin-care tips with Remington Rebeil, as the blondes both share fair complexions. She also dished on her favorite shoes, including the “Kelly,” a strappy high-heel slide. She sent blue versions of the star-encrusted boots to her friends affiliated with the Dallas Cowboys: Charlotte Jones Anderson, whose family owns the football team, and Candice Crawford Romo, the wife of its star quarterback, Tony Romo. Plus, she hoped her playful collection encourages women to test new trends.

“Sometimes I think people get a little nervous about wearing a full trend,” Bosworth said. “But if you want to accessorize with a trend, I think it’s a little more palatable. If you were to wear the Kelly in the fawn suede, it gives a little bit of a Seventies flair for summer.”

But Bosworth limited her style tutorials to the single personal appearance at Nordstrom, as she has to fly back to Montreal to film a TV show, “The Art of More,” which is the first original scripted drama series for Crackle, Sony’s Netflix-like streaming service. Working with Dennis Quaid and Christian Cooke, Bosworth portrays the daughter of an owner of a prominent auction house. The November release of the potentially binge-worthy series follows the September premieres of “Before I Wake,” a horror film costarring Thomas Jane, and “90 Minutes in Heaven,” an adaptation of Don Piper’s book that is directed by her husband, Michael Polish.

With all those projects, it wasn’t possible for Bosworth to continue her collaboration with Matisse through the fall season.