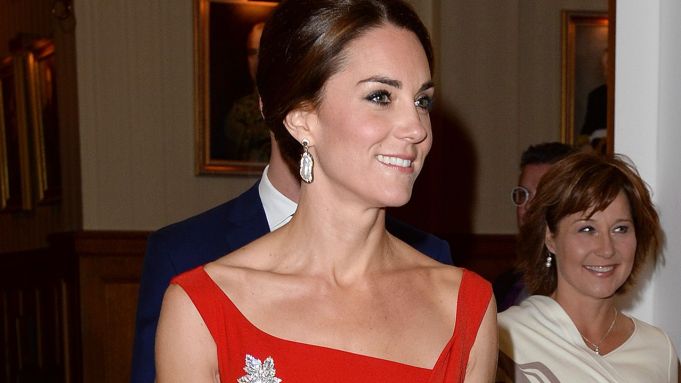 The world — populated by millions of avid social media users — is watching as the Duke and Duchess of Cambridge make their way through Canada on their second-ever royal tour of the country. Thousands of tweets and over 3,000 Instagrams have been posted using #royalsvisitcanada (the tour’s official hashtag, mind you). And after sightings of Prince George and Princess Charlotte, it’s hard to imagine the crux of the conversation would move on from the babes to the fashion — but thanks to Kate’s latest fashion choice, it has.

The duchess has upped the fashion ante once again, this time with a crimson midi dress from Preen by Thornton Bregazzi. She donned the look for a reception at Government House in Victoria hosted by the Government of British Columbia on Monday evening. She styled the dress with matching red suede pumps and finished off the look with what could be her new signature accessory, a diamond maple leaf brooch that was given to her by Queen Elizabeth. Kate wore the pin of the Canadian emblem over the weekend, upon arriving. She wore the same piece during her royal tour of Canada in 2011.

More: See all the looks The Duchess of Cambridge wore to her first trip to Canada in 2011.

Kensington Royal, the official Instagram and Twitter with updates from Kensington Palace and activities of the duke, duchess and Prince Harry, has been especially active on this trip, posting behind-the-scenes footage of the events as well as sweet moments between the royal couple. See photos from the trip as well as fashion details here.