It's been a busy year for the model who has fronted a range of beauty, fashion and accessories campaigns. 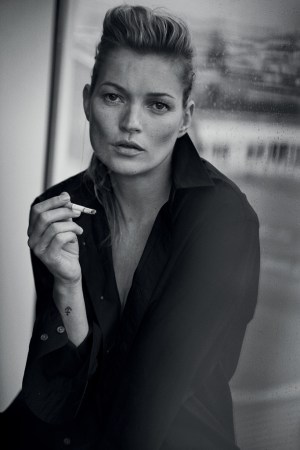 MODEL MOMENT: Kate Moss is celebrating her 42nd birthday today. It’s been a busy year for the model, who has fronted a range of beauty, fashion and accessories campaigns.

Moss, who became the face of Cosme Decorté’s beauty line, also appeared in Balenciaga’s fall campaign alongside Lara Stone. The model was featured in Mango’s ad campaign with Cara Delevingne then in David Yurman’s holiday campaign with Anna Ewers. In addition, she was the face of Matchless, a British motorcycle brand for its spring 2015 campaign.

Moss teamed with Bella Freud in November on a charity sweater project to aid the Save the Children.

She made headlines last June when Moss was escorted off an EasyJet flight for disruptive behavior as she flew from Bodrum, Turkey to London’s Luton Airport.