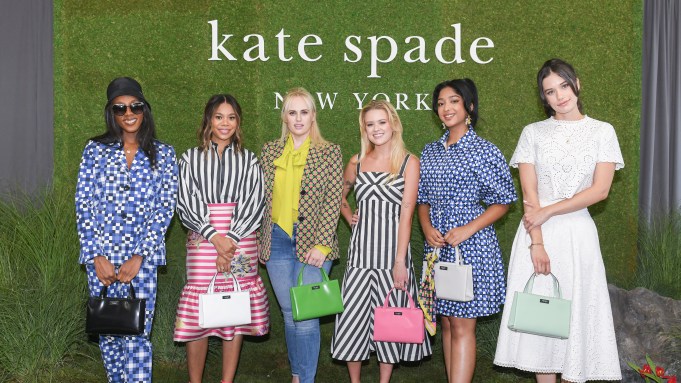 The morning after catching a tennis match at the U.S. Open, Rebel Wilson was downtown and dozens of stories high. The actress stopped by Kate Spade’s spring presentation, 80-some stories high at 3 World Trade Center, dressed in a “zesty lime” pussy bow top from the new collection. “I feel very New York,” said Wilson, who lives between the city and Los Angeles. “As I came out of my place in Tribeca, walking on the cobblestone streets, I was like — yea, this is New York.”

The actress, in town for fashion week and tennis, was helping the brand celebrate its 30th anniversary.

“[Kate Spade] was launched in 1993, so when I was a teenager, and I remember the Kate Spade handbags being very iconic,” said Wilson, adding that she picked up her first bag from one of the brand’s factory stores when she came to New York as a young actress. “I always associate it with beautiful, fun, New York.”

Wilson is headed to the Zurich Film Festival for the premiere of her film “The Almond and the Seahorse,” which costars Charlotte Gainsbourg. “It’s a serious movie; it’s kind of a departure from what I’m normally known for,” said Wilson. “It’s really cool to do something so different to all the comedies I’ve been doing, even though I love those as well — I’m about to shoot more of those.”

In anticipation of back-to-back filming next year, Wilson is enjoying her downtown while she has it, including going to see some more tennis and a few Broadway shows.

Like Wilson, comedian Ziwe’s fondness for Kate Spade also harks back to childhood.

“I’ve always found it really chic,” she said. “There’s this really famous 3LW song [‘No More (Baby I’ma Do Right)’; from 2001], they sing ‘promised me a Kate Spade, but that was last year.’ I was in the sixth grade listening to the track thinking, wow, if only a guy would get me a Kate Spade. And now I’m a young professional woman and I have my own.”

Ziwe is in the middle of editing the next few episodes of her Showtime series. And as for the rest of her fashion week plays? “To be determined,” she said. “The sky’s the limit.”