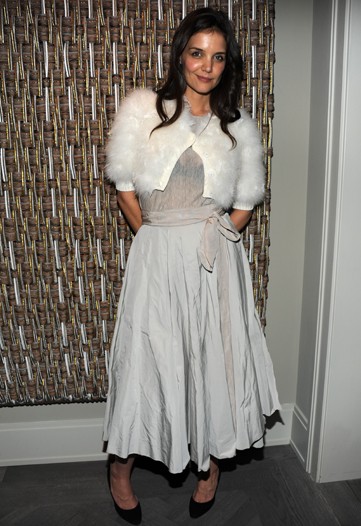 A little after 11:30 on Tuesday night, a half-dozen paparazzi stood outside a building in New York’s Chelsea neighborhood waiting for Katie Holmes to exit. With the actress’ arrival imminent, the photographers passed the time practicing.

“Katie!” one would mockingly shout out. On cue, the others lit up the street and the imaginary starlet with their flashes.

A bit earlier in the evening, and several floors higher, in the penthouse apartment of Barneys New York chief executive officer Mark Lee, a different sort of flashing lights mesmerized guests at a dinner he hosted for Holmes and Jeanne Yang, her partner in the fashion line Holmes & Yang.

“You have fireworks for us, too?” Yang asked Lee as a few partygoers made their way through his kitchen to a back patio to watch. “Oh my God, you are fabulous.”

Well, not quite. According to the New York Fire Department’s Twitter feed, the pyrotechnics over the Hudson River on Tuesday night were an early Saint Patrick’s Day celebration, and the handiwork of the Grucci family. And though they might have added a nice touch, explosions in the sky were a bit incongruous with an otherwise very low-key evening.

“Well, we’ve all been traveling for weeks and we’ve all been away from home because we’ve been in Paris, and a lot of the guests, the same,” Lee explained outside his living room as caterers served dessert. “I just think it’s nice to be home.”

Lee had invited a crowd of about 40 guests, which included Jason Wu, Mark Consuelos, Amy Sacco (a neighbor, she helpfully explained), a handful of editors and his new-look Team Barneys: Amanda Brooks, Dennis Freedman and Charlotte Blechman.

As dinner was served, Holmes, in the midst of a Barneys trunk show tour for the line, explained her tips for making a home on the road.

“Bring lots of crayons, glue, good paper and you can turn any room into a very warm, familial place,” she said with a smile. In fact, as the actress went on to explain her sewing hobby, she seemed less Katie Holmes: Tabloid Fixation and more Katie Holmes: Ultimate Homemaker.

“My mom grew up making curtains and pillows and everything, and it made our home very warm, so I like to do things like that with my daughter,” she said. “My husband got me a sewing machine for my birthday.”

“Oh, I can’t give away such details,” the actress said with a laugh.

Her friend Heather McQuarrie, who had been traveling with her, piped in: “That’s like asking a woman her age.”

Both women laughed. WWD explained that it did not know of such restrictions.

“Now you do,” they said almost in unison.