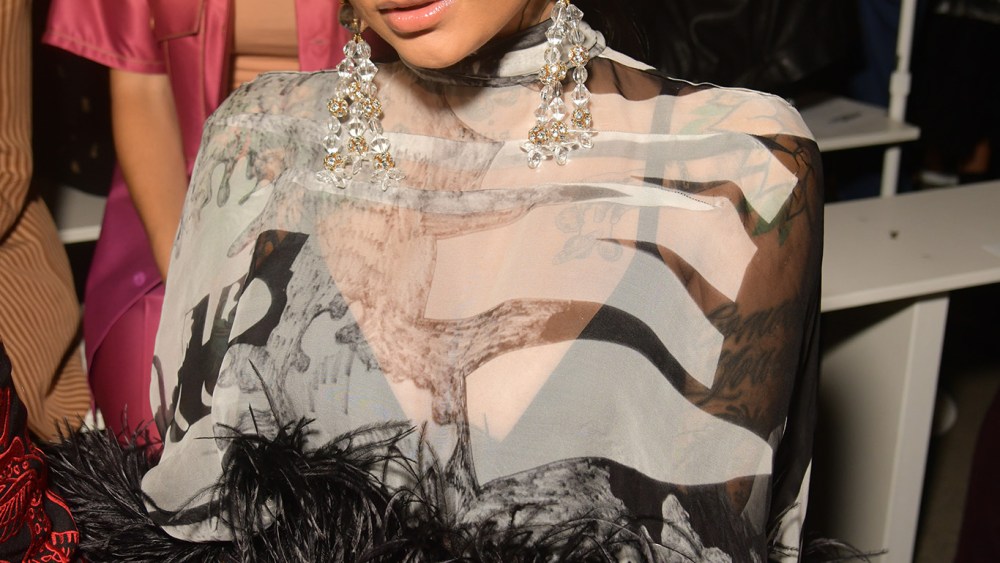 It was madness as usual at Jeremy Scott’s front row on Friday night — where Offset and Quavo, G-Eazy, Irina Shayk, Gigi Hadid and Heidi Klum were swarmed by photographers, staff and publicists. Sitting off to the side quietly, looking serene with well-highlighted cheekbones was Kehlani, who’s unexpectedly become a subject of much discussion since it was revealed that she’s dating the Compton, Calif., rapper YG. Photographs of the 24-year-old Oakland, Calif., native holding YG’s hand surfaced recently, and the entertainment media’s been up in arms since. According to Kehlani, though, she and her man had no idea that the news was going to come out.

“We were very frustrated,” she explained. “But we had planned to pop out anyway. We’re not trying to hide — it’s love. The paparazzi just caught us. It happens.”

Offset, who walked in the Jeremy Scott show a few seasons ago, had returned to support the designer, with whom he says he has a personal relationship.

“He’s a real person, a real human being,” he said. “Also, he’s a creative genius for the youth. A lot of kids love him, that’s the most powerful influence you can have.”

Wearing a platinum Rolex studded with diamonds and at least three diamond chains, Offset said he’s working on his own television show. He declined to divulge details, but when asked whether it had anything to do with Quavo’s upcoming animated series about growing up in Atlanta, he smiled.

“Uh, maybe,” Offset said. “Sounds like you know something.”

Quavo, in his signature diamond-rimmed glasses, showed up with his girlfriend Saweetie, who’d performed at the Cheetos fashion show the night before. Offset poked Saweetie to get her attention, then advised her to have her stylist fix the back of her hat, which was lopsided.

Another couple in the crowd: G-Eazy and Yasmin Wijnaldum. G said it was his first time coming to New York Fashion Week, to see Wijnaldum walk the runway.

When Wijnaldum did finally make her way down the catwalk, Shayk, Hadid and G-Eazy all cheered her on; Hadid took pictures with a disposable camera, Shayk cried out in support and G-Eazy scrambled for his phone after zoning out for a second.