The Chanel ambassador joined Lily-Rose Depp and Claudia Schiffer to take in the house’s 2020 cruise show at the Grand Palais in Paris. 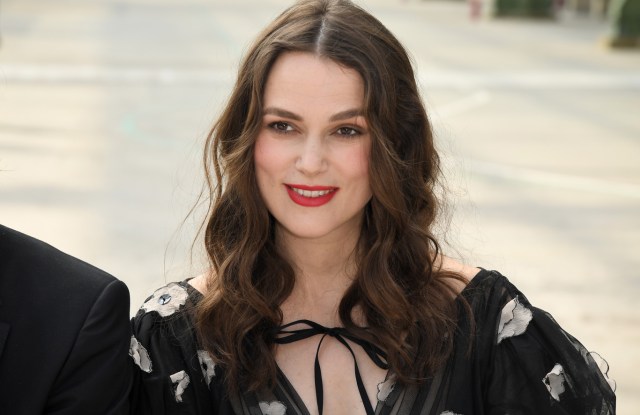 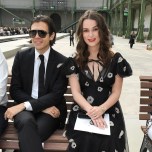 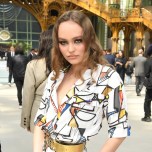 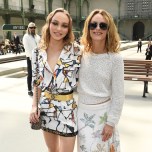 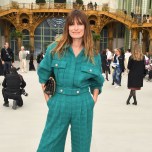 Viard, Karl Lagerfeld’s longtime righthand woman who succeeded the designer as the house’s artistic director following his passing in February, is the first female designer to head the brand since Gabrielle Chanel herself.

Melding perfectly with the pale green glass-and-steel structure of the venue, the show’s set was based on an old-school train station, with realistic train tracks and signs marked with different destinations including Rome, Venice and Saint-Tropez.

“The fact that it’s going back into the hands of a woman is so unbelievably exciting. Virginie worked alongside Karl for more than 30 years, so she understands the fabric of the house so well, but is now bringing that very feminine, cool touch…Looking at that collection, I was, like: ‘yes, I want to wear all of that, thank you very much,’” enthused Knightley after the show.

Observing the set, a sun-kissed Gaspard Ulliel, just back from a scuba-diving vacation in Menorca, talked planes, trains and carbon footprint.

“I’m really concerned about climate change, but unfortunately taking planes is the big contradiction we have to live with, especially for anyone working in industries like cinema or fashion,” said the actor, whose movie “Sibyl,” filmed in Stromboli on Italy’s Aeolian Islands, will be screened in competition at the Cannes Film Festival this month.

Depp chatted about her next project, Neil Burger’s sci-fi movie “Voyagers,” that she’s due to start filming next month.

“It’s been described as a ‘Lord of the Flies’ but in space, which is not how it was described to me,” deadpanned the actress, who sported a dress from Chanel’s 2019 Métiers d’Art collection, offset with fierce Egyptian-inspired makeup — the Cleopatra-style cat-eye liner offsetting her moon-wide cheekbones.

“I always have very specific ideas for my makeup looks, my makeup artist kind of hates me for how stubborn I am,” she shrugged. Depp picked up Knightley’s thread about a woman once again being at the creative helm of the house. “There’s something so beautiful about that, and so symbolic,” she said.

“Nobody knew Karl and his vision better than Virginie…but at the same time, she has such amazing taste and ideas. Today we could really feel Virginie’s presence in the collection, and she brings a touch of femininity that is really beautiful and very specific to her. I can’t wait to see what she does with it going forward, and I can’t wait to congratulate her,” she said.

Argentine actress-turned-singer Chiara Parravicini had mentally ticked off the collection’s first look for the upcoming tour for her debut studio album, “Wilder.” “It was new and fresh and true to the nature of a cruise collection because it’s easy to wear and pack,” she said of the show.

Hubert Barrère, artistic director of the Chanel-owned embroidery atelier Maison Lesage, who has known Viard for over 20 years, agreed there is a clear correlation between the idea of femininity that the house of Chanel represents and “the modernity of” Viard.

“I have never once seen her lose her temper, she is extremely reserved and mindful of others, and she has an incredible vision. She just sees things. Here, for the embroidery, it was flowers from the south of France: mimosas, roses and bougainvillea,” he said. “It’s a continuation of Karl Lagerfeld’s legacy, but it’s also totally Virginie.”