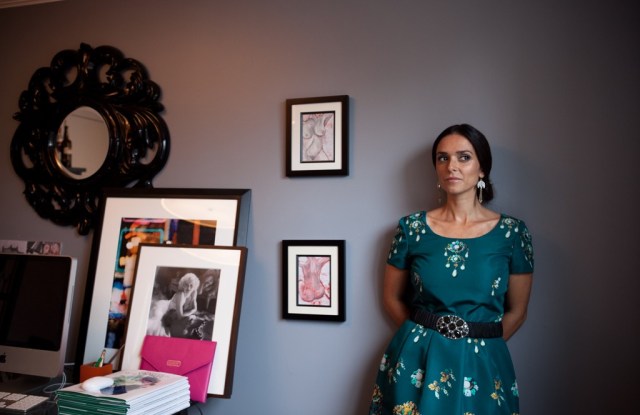 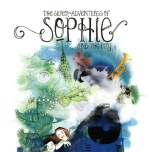 When budding children’s author Kelly Florio Kasouf, daughter of late Condé Nast chief executive officer Steve Florio, released her debut last year, “The Super Adventures of Sophie and the City: All in a Day’s Work,” she harnessed her own childhood experiences with the fashion world. The book featured the fictionalized versions of modern-day industry figures such as André Leon Talley and Isaac Mizrahi. Now that Florio Kasouf has a burgeoning franchise on her hands with the release later this month of a sequel, “The Super Adventures of Sophie and the City: Grand Central Escapades,” she had to dig a little deeper into her family history.

“I was looking at this cameo that my mom gave me when I was 21 years old, and realized that I didn’t know anything about the women in my family,” says Florio Kasouf. “A woman [in my family] came over to America with nothing to her name but this amazing cameo that she held so close to her heart, and now I have it. I wanted to write about family history and [its] symbolism.”

“Grand Central Escapades” finds the titular Sophie on a time-traveling voyage to the Twenties, with appearances from Christian Dior, Paul Poiret and Marguerite Lanvin, among others. With the second installment, which went on sale last week exclusively at Barneys New York, Florio Kasouf has managed enough real-life fashion tie-ins to have Eloise shaking in her mary janes.

To start, the heirloom cameo plays such a major role in the new story that Florio Kasouf collaborated with jewelry house Lulu Frost to produce a line inspired by the piece.

“I was very touched by the whole family tradition story that Kelly has been weaving,” says Lisa Salzer, founder and designer of the jewelry line. “My grandmother was an antique jeweler, so when Kelly started talking about this wonderful cameo that she had been given by her family, we immediately said there should be a piece that a young girl inspired by Sophie could buy and think of this as her own, modern-day heirloom.”

While Florio Kasouf’s original cameo was carved in ivory, Salzer modernized the necklace (retailing for $78) in purple and gold resin with a silhouette, of course, of the Sophie character. The collection also includes three metal charms inspired by the story (Divine Deco, Roaring Tempo and Gilded Glam; $45 each). All pieces hit Barneys on Thursday.

And since a girl shouldn’t have a necklace without a party dress, Florio Kasouf has also brokered a collaboration with Oscar de la Renta for an exclusive Sophie-inspired frock.

“Papo d’Anjo was one of my favorite children’s lines, so when I heard that Oscar was working with the designer, I tweeted ‘Oh, this would be a fun idea for Sophie,’ and was just going to have a dress from their children’s wear collection [in the book],” says Florio Kasouf. “When we were doing the illustrations, Sophie was running around in a blank dress, the poor little thing.”

She met with the De la Renta team, who took a liking to the book. With that, they offered to sketch the dress that appears throughout “Grand Central Escapades,” and brought a real version — a cotton voile number in a purple-and-green iris print — to life. The $295 dress was part of De la Renta’s children’s spring runway show in September, and will be sold at his Madison Avenue boutique, as well as Bergdorf Goodman, beginning early next year.

While Eloise has the Plaza, Sophie has her own hotel home at The Carlyle. Beginning in January, the Upper East Side hotel will offer two “Sophie and the City” VIP packages. The basic (rooms starting at $540 a night) includes welcome amenities inspired by the book, an exclusive pillow by Matouk and signed copies of both books, while the Super Sophie Experience (rooms starting at $835 a night) includes the entire Frost collection and the De la Renta dress, as well as a visit to the De la Renta Madison Avenue boutique for a one-on-one fitting.

Despite a busy couple of months ahead for Sophie, not to mention two real-life kids of her own, Florio Kasouf is ready for more.

“[The Sophie brand] is kind of like American Girl with real designers,” she says. “I want to see how designers are inspired by my brand rather than just having sheets and pillows with logos everywhere. This isn’t a Mattel situation.”