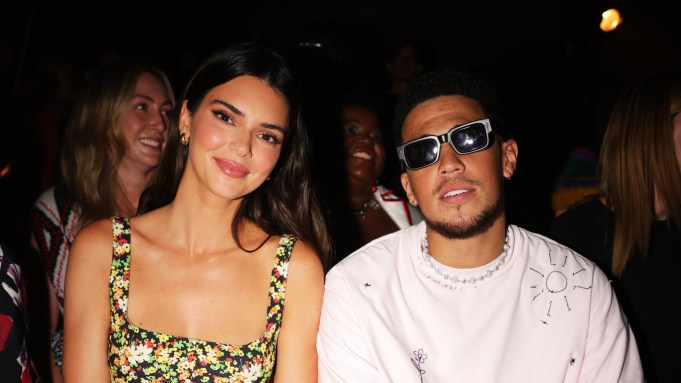 Who needs a date night out at Carbone when the front row of Marni beckons? Kendall Jenner and her on-again NBA star boyfriend Devin Booker were front row at Marni’s New York Fashion Week one-off show Saturday night, venturing across the river to the show’s Brooklyn Bridge venue for the action. Jenner was the epitome of transitional seasonal dressing, pairing a floral summery dress with tights and knee-high black boots.

She has been making the rounds this NYFW, walking in the Proenza Schouler show and following up Marni by hosting a party with GQ at the new swanky NoMad hotel The Ned. Booker joined her for the party as well.

Marni was the place to be Saturday evening, as Madonna also attended the show, prior to hitting Marc Jacobs’ Heaven party at Elsewhere. Doja Cat did the same, sitting front row before heading to Jacobs’ party, where she was a cohost.

James Harden, fresh off the Saks NYFW party on Thursday, was present at Marni, as was Collina Strada designer Hillary Taymour, posing with friend Kimberly Drew.

The front rows this NYFW have been busy, with the likes of Janet Jackson, Doja Cat, Kim Kardashian, Lori Harvey, Rebel Wilson, Natalia Dyer, Laura Harrier, Lana Condor and more showing up for the new collections. And of course there was the return of the Supers at Fendi, where Kate Moss, Christy Turlington, Shalom Harlow and Amber Valletta all were in attendance.

The rest of the celeb scene Saturday night took place at Givenchy’s party at Nine Orchard, the GQ party and of course, the Jacobs party.