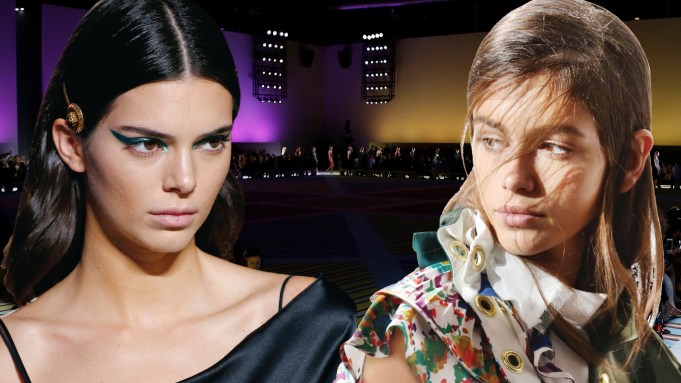 Kendall Jenner stepped into fashion month with something to prove — at least, to many of her fellow models. In late August, an interview she gave to Love magazine was published, quoting her as saying she’s “selective” about the shows she walks in, and therefore is able to cherry-pick which jobs she takes during fashion month.

“Since the beginning, we’ve been super selective about what shows I would do. I was never one of those girls who would do like 30 shows a season or whatever the f–k those girls do,” Jenner told Love. “More power to ‘em. But I had a million jobs, not only catwalks but everything else. The whole combination was very overwhelming and I started to freak out a little bit and needed to take a step back.”

Safe to say the comments did not sit well within the fashion community, and Jenner was soon on Twitter, explaining that they were “taken out of context” and “twisted.”

It’s clear a model with Jenner’s background has a leg up in the industry over many young women with less famous families — and perhaps can thus afford to be selective. But not every celeb scion has chosen to go about things the way she has — even the daughter of a true supermodel.

Cut to young Kaia Gerber, daughter of Cindy Crawford and now officially one year into her career as a runway model (remember that Calvin Klein debut last September? How time flies). In the fashion weeks following, she’s cemented herself as one of the most in-demand models both on the runway and off, and by some standards has stolen the thunder from the Gigi Hadids and Kendall Jenners of the world.

Jenner, on the other hand, clocked in only seven — Off-White, Missoni, Versace, Fendi, Moschino, Alberta Ferretti and Burberry — and was spotted back at LAX this past Saturday, with many of the biggest shows in Paris yet to happen. Selective, indeed.

So who to settle the score? We turn to Naomi Campbell, naturally. While speaking to TV host Andy Cohen last week, Campbell was asked for her stance on “Kendall Jenner being the highest paid model while saying she ‘cherry-picks her jobs’ and ‘could never do 30 shows in a season,’” to which Campbell gave a shady “next question” response.

When asked about Gerber, though, Campbell had a much different tune.

“She’s adorable. I’m very proud of Kaia,” the supermodel told Cohen. “I sat with her and her mother at Azzedine Alaïa’s, my late papa who’s no longer here, we sat at the kitchen table and we just went through all the shows she should do or shouldn’t do at the moment because, she’s a baby. She’ll get to them. And she has followed everything. Very proud of her.”

So, selectivity or not, who seems to be the most in-demand model of the moment? Just ask Karl Lagerfeld who, it should be noted, is doing a line with Ms. Gerber.

VIDEO: Watch Kaia Gerber and Karl Lagerfeld Talk About Designing Their Capsule Together