Kenny Scharf Has Many Faces

The artist is showing new works at Jeffrey Deitch in Los Angeles.

“You know, I’ve been doing emojis before there was an Internet,” says artist Kenny Scharf.

He’s been painting his trademark Pop Art emotive faces since the early Eighties, certainly long before the word emoji became part of the digital lexicon in the late Nineties. And Scharf’s colorful faces, informed by Abstract Expressionism, certainly offer up more emotional nuance than the ubiquitous digital yellow smileys. Presented together, his work surveys the subtle variations of human reaction.

Scharf, whose medium is primarily spray paint, was commissioned to paint 400 faces for an exhibition at Jeffrey Deitch in Los Angeles, aptly titled “400 Faces.” He ended up painting 401 works and ultimately only 250 fit in the space; the show was renamed “Moodz.”

It’s a continuation of the work he showed last summer at La Nave Salinas in Ibiza, titled “Universalis.” Deitch saw the work in Scharf’s L.A. studio and wanted to install something similar at his gallery. But while there were 145 faces in the Ibiza show, installed all together on a mural-sized wall, the scale in Los Angeles is even more maximalist, with faces collaging three walls of the lofty gallery. 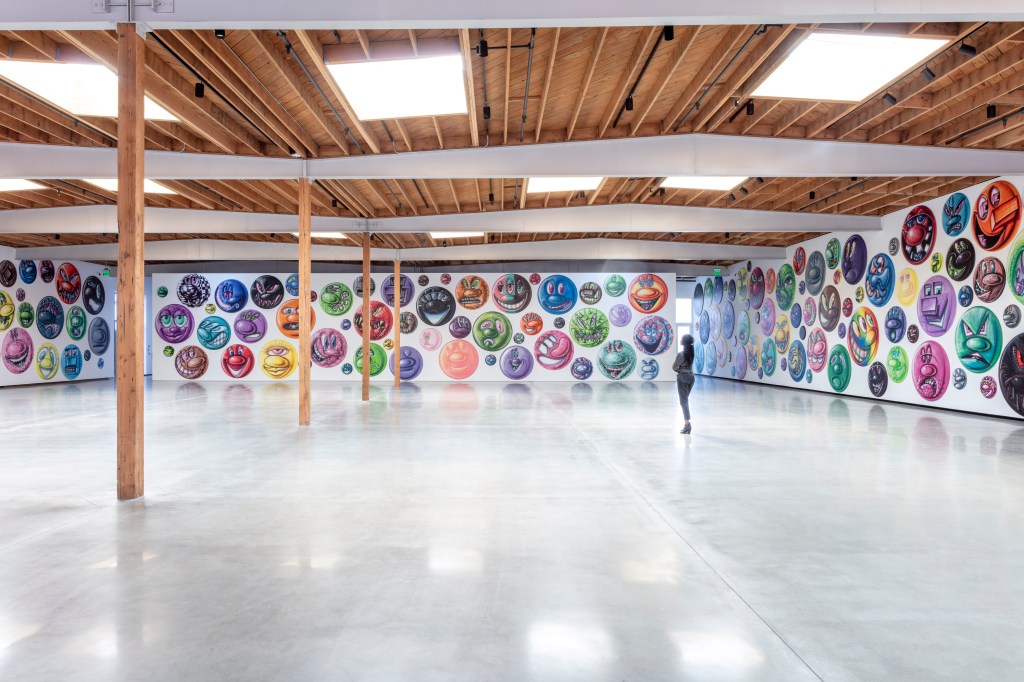 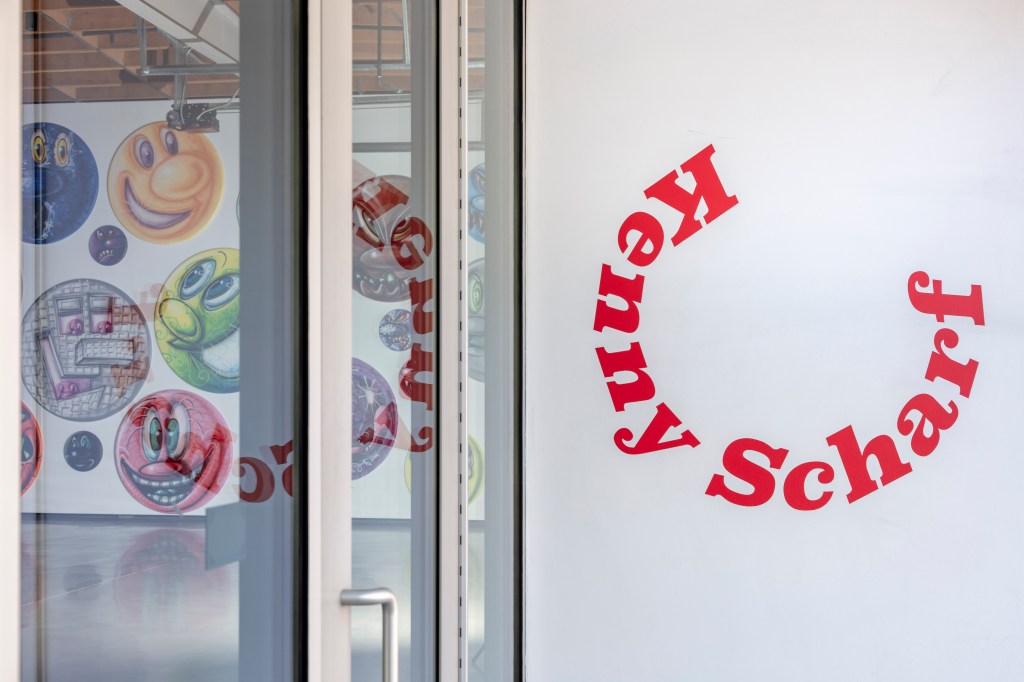 “The parameters are it’s a face; that’s it. I can do anything else, but it’s a face. I repeat myself, but never exactly the same,” says Scharf from his studio. He painted the faces using canned spray paint, which lends a gestural quality to the work. It also allows him to bang them out quickly, even more so because he’s been painting them for four decades. But, despite the repetition, he always finds a new face to paint.

The faces are a reflection of Scharf — he paints each one himself, as opposed to delegating to studio assistants — but like emojis, the works contain a universality. “It might be how I am feeling. Sometimes it might be how I think someone else is feeling,” he says, describing the process as therapeutic. “It’s a release. It saves me a lot of money on psychiatric [care]. I know it does.”

They also document the current moment. Scharf finished painting the faces a few months into the pandemic, right as Black Lives Matter protests were ramping up at the end of spring. “At the finishing hurdle is when all this crazy stuff went down, and that we’re still very much in. [The work has] reflected some of the urgency of the moment,” he says. “What’s so great about spray paint is that you can do something in an instant and it can be improvised and fast; it’s of that moment.” Although not installed in the gallery chronologically, Scharf is considering that sequencing possibility for a book he’s currently working on. 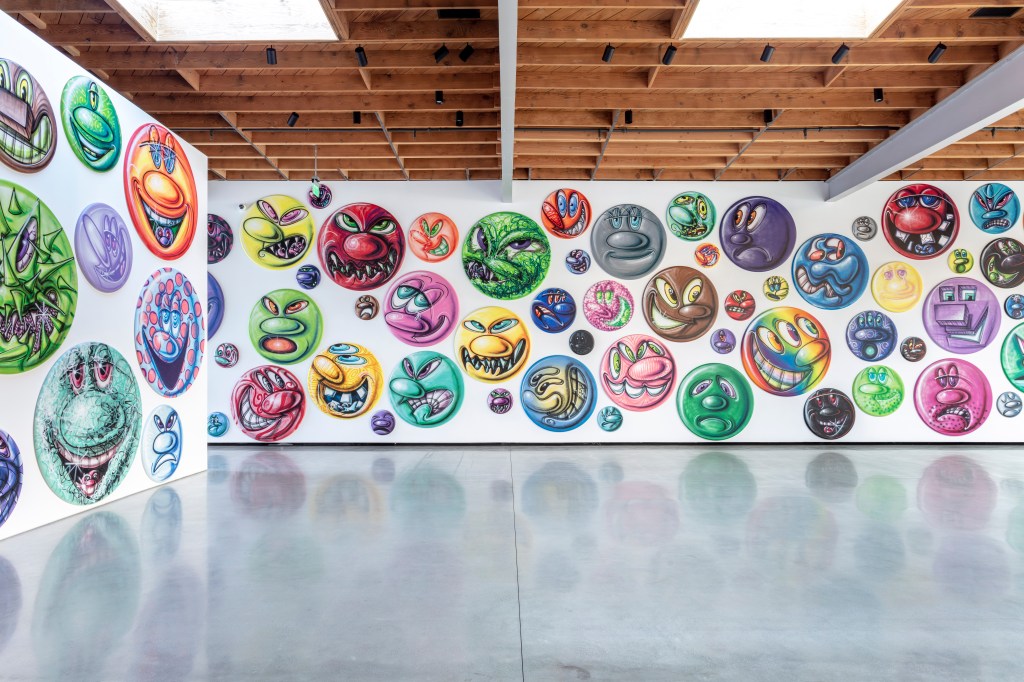 An irate face, orange and filled in with scrawled black lines, accompanied a June 16 post on Scharf’s Instagram account. In the caption, Scharf wrote about his experience with police brutality as a young white graffiti artist. “I’ve been the target of police brutality more than once in my younger days spray painting in the NYC streets. I learned very early that my life was spared because I am not Black,” he wrote.

Scharf established himself during the downtown art scene of the Eighties alongside Keith Haring (the two shared an apartment) and Jean-Michel Basquiat. In his Instagram post, he paid tribute to Michael Stewart, part of that downtown artist friend group. Stewart, a young Black artist, was killed by the police in 1983, after he was arrested for writing on the wall of subway station. A week earlier, Scharf had a run-in with the same police.

“After Michael Stewart was killed, murdered, I realized immediately that that’s why I was alive: because I was white,” says Scharf. “Doing something in the subway or the street had a lot of risks — and we didn’t know, we were just kids. I’ve witnessed it. It was pretty violent and scary, and immediately I thought they must have been killing a lot of other young Black kids, and no one knew about it. The only reason we did is because Michael Stewart was in the art world. There were big protests about it. We took over Union Square Park, and Andy Warhol did a painting about it and Keith Haring and Jean-Michel Basquiat did artwork on the subject.”

Although the city has changed since the Eighties and Nineties crackdown on graffiti, the stakes of street art still differ depending on the artist’s skin color. In 2013, Scharf had a second run-in with the police — for painting in Williamsburg, this time as a successful artist — and spent 20 hours in a local detention facility.

“It was a wakeup call to me,” says Scharf, one of the few white people in there. “A lot of them were there for stop-and-frisk…and they are stuck there,” he continues. “I was in there, luckily, only one day, one night. They were in there a lot longer; they didn’t have lawyers to get them out.”

After painting 401 works for the Deitch exhibition, Scharf took a short break from the faces. But he’s always creating, and in late June he was painting a jungle, using more time- and labor-intensive oil paints. He also released a collection of face masks (which sold out in two days) in the style of his face paintings, from the nose down. “Right now making paintings, it’s liberating to be able to do whatever I want,” he says. “And not know or actually care that much where they are going to go, or where they are going to be seen.”

“Moodz” will be open by appointment, after months of galleries primarily showing exhibitions online. Although there is always a physical effect of seeing art in person — and certainly given the scale of “Moodz” — Scharf’s work is prime for the digital space. “Obviously, these faces are perfect for the Instagram post,” he says. “And, they just take up a circle and a square.”

But look how much you express with those two shapes. 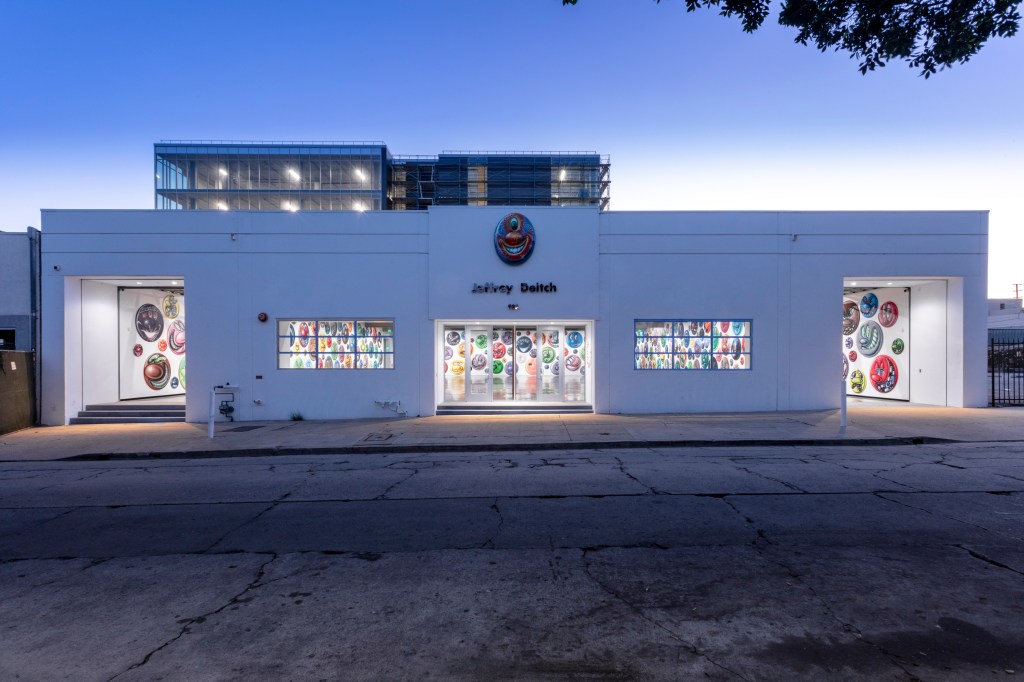