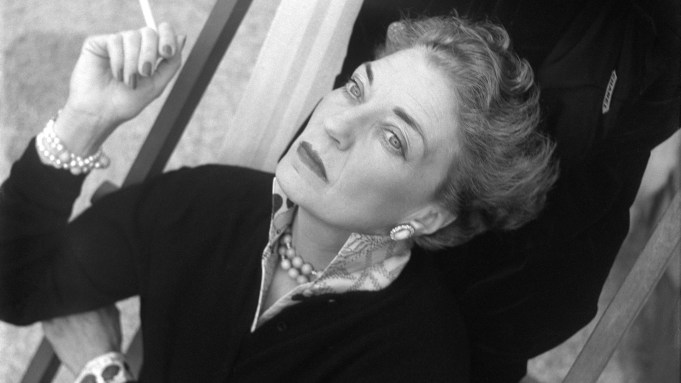 With an arsenal of couture and prominent friends like Cecil Beaton, Cristóbal Balenciaga and Hubert de Givenchy, Mona Bismarck’s gilded style is the focus of a new exhibition at the Frazier History Museum in Louisville.

A world-class designer shopper, the globetrotting midcentury socialite helped popularize halter-neck tops, asymmetric bias-cut dresses, colorless nail polish, aquamarine and double-strand pearls. Partial to ivory or white eveningwear when the rest of the crowd was wearing Little Black Dresses, Bismarck culled her own sense of style and in doing so befriended Balenciaga and Givenchy. In 1933, she became the first American to be named “Best-Dressed Woman in the World,” at a time when leading French couturiers like Coco Chanel, Madeleine Vionnet and Lucien Lelong made that call. She won again in 1934 and 1936 and remained in the top 10 when the list switched hands. And when Balenciaga announced his retirement, Bismarck retreated to her bedroom for three days. Word of her distress was reported by Diana Vreeland, who was believed to have been a guest at Bismarck’s Il Fortino villa in Capri, at that time.

Through the course of her five marriages, Bismarck was wed at one point to the most handsome man in America, James Irving Bush and a year after their divorce, to the richest man in America, Harrison Williams. Her social circle included President Dwight D. Eisenhower, the Duke and Duchess of Windsor, Princess Grace, Truman Capote, Tennessee Williams and Greta Garbo. On view through July 29, “Magnificent Mona Bismarck” presents 50 ensembles from her Golden Years in the Thirties through the Seventies. Along with a shocking pink Schiaparelli dinner jacket, Givenchy silk organza cocktail pajamas, a black Vionnet Chantilly lace dress with trompe l’oeil bows over a pale pink lamé slip, a Verdura lion’s paw brooch, and 24 pairs of Roger Vivier pumps, there are 36 Balenciaga garments and hats. Artists such as Salvador Dalí captured her feline-like eyes and blue-gray hair in portraits — a reproduction of which is also on view.

Perhaps more insightful are the personal letters from Balenciaga and other confidantes, as well as drawings, sketches and photographs including images from Beaton, Edward Steichen and Horst P. Horst. Having reviewed the lifetime of correspondence Bismarck gave to The Filson Historical Society, “Magnificent Mona Bismarck” curator Scott Rogers said she “never, ever once mentioned her clothing — not even to letters to Balenciaga or Givenchy. They’re mostly about gardening. And she was very committed to supporting the soldiers in WWII. There were endless letters asking Mona, ‘Please help me. We’re destitute.’ Then there are letters thanking her profusely for her kindness,” Rogers said. “Beauty has to have some sort of inner conversion for it to not just be surface. Mona had that generosity of spirit.”

Rogers disputed reports that Bismarck agreed to a $500,000 divorce settlement from her first husband Henry J. Schlesinger in exchange for giving him full custody of their toddler son. The divorce settlement “very clearly states” because of the sex of the child, a boy, he should be left in the care of his father, he said. “There is absolutely no mention of any money or exchange whatsoever other than the fact her husband was incredibly powerful and wanted an heir. It was reported in the divorce settlement that it had been an abusive marriage. Mona was petrified. That was also supported by letters from her dear aunt, saying, ‘We’re so sorry you’re so miserable. Come home. You always have a home here.’”

Bismarck died in 1983 (in a pink and black Givenchy gown.) After her 30-year alliance with Balenciaga ended with his retirement, she became more devoted to Givenchy, who once wrote,”Her life is worthy of a novel with all things beautiful.” While a lot of people are coming to see the clothes in the Louisville show, “they will be blown away by this incredible gracious woman” as evident by the show’s ancillary material and letters, he said. “She was just so way and beyond her attire,” Rogers said.

Accustomed to seeing historic black-and-white photos of Bismarck, Rogers was floored to see how incredibly colorful her wardrobe was and the well-thought out choices she made for her color palette. And rather than favor Balenciaga’s sculptural designs and enveloping gazar fabric, “preferred the height of conventionality as a fine woman would,” Rogers said. So much so, that Stephanie Wood, co-curator of the V&A’s recent “Balenciaga: Shaping Fashion” commented at last week’s opening “how Mona’s Balenciaga world was so drastically different than her historic Balenciaga world,” Rogers said.

Raised in Kentucky “as a proper Southern lady,” Bismarck dressed the part with an innate femininity preferring “very simple cuts, monochromatic but with the most exquisite fabrics and surface details,” said Rogers, adding she often altered necklines “to accommodate her incredibly beautiful jewels.” Visitors will see notes from Balenciaga, thanking Bismarck for dinners she hosted, and a gift of a bilboquet (which Rogers presumed must have been an exquisite piece from her travels.) “That’s the person she was, giving really charming gifts or pots of jam made from the fruits in her garden on Capri. There is a lovely letter from Beaton thanking her for the Christmas figs. Deep friendship was a quality not lost on her. Gore Vidal said, ‘When Mona likes something, she sticks with it.’” Rogers said. “That certainly was the case with her relationship with Balenciaga. In 1929, when Beaton first met her at the family’s estate in Oyster Bay, Oak Point, he wrote, ‘She’s a rock crystal goddess with aquamarine eyes.’”

While “little black dresses have essentially been in vogue forever, Mona often chose to wear white and ivory in contrast to all the lovely ladies in black,” according to Rogers. The 20 gowns, spanning 1950 to 1976, have stopped visitors for another reason. “We’ve gotten a lot of comments about the variation in sizes. Certainly, life happens and the body changes. I made a special point to include that and to not just include small sizes. I consider it a retrospective and want people to know her. How her body changed through the decades was part of that and shouldn’t be denied or hidden,” he said.