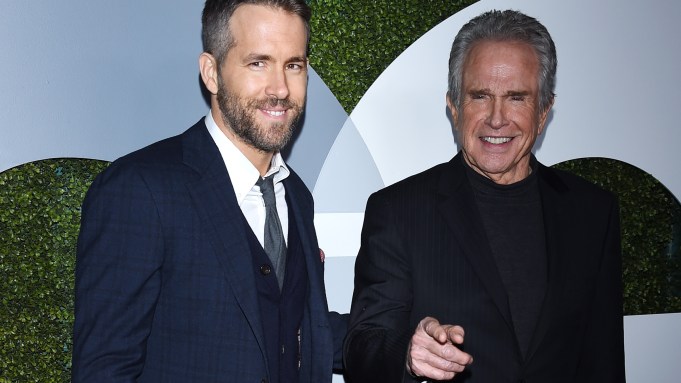 Warren Beatty, Ryan Reynolds and Usain Bolt celebrated their December covers at GQ’s Men of the Year 2016 party held poolside at the Chateau Marmont on Thursday night. Reynolds proved to be an early arrival, appearing shortly after the party’s 8 p.m. start. He wasn’t quite as punctual as “The Good Wife” star Matt Czuchry.

“I was here at 7:55 and they wouldn’t let me in,” laughed Czuchry, clad in a John Varvatos suit. Fresh off the “Gilmore Girls” reunion on Netflix, the actor said he looked forward to taking in the scene. “This is the first time I’ve been to this event. The people who come are inspiring — the actors, the athletes, the producers, the directors. That’s what makes it fun,” he said, though he said it takes a lot to get him suited up these days. “I did ‘The Good Wife’ and I was in suits for seven years, so because of that I try to do as few suits as possible. But tonight is a special occasion, you know?”

Christian Slater and his wife Brittany Lopez hung out on a black lounge chair with Slater’s “Mr. Robot” costar Carly Chaikin and her boyfriend. However, the group stopped short of calling it a double date.

“I wouldn’t call this a date night,” Slater said. “Journalists don’t show up on dates, right?” Slater said he and Lopez usually hang at home while watching shows like “UnReal” and “Bachelor in Paradise.” “Do you watch? It’s so great. It’s a guilty pleasure,” Slater said.

Cigar smoke filled the air courtesy of Nick Jonas, who puffed away while wearing a sharp white jacket. As attendees attempted to navigate the packed party, star sightings were plentiful. Robert Pattinson chatted on his cell phone while arriving with girlfriend FKA Twigs. The duo eventually found a cozy corner — not too far from Beatty and wife Annette Bening. Elsewhere, Kevin Hart caught up with Nick Young; Joel Edgerton found a friend in Bolt, and Wiz Khalifa hung out with Keke Palmer by the bar.

Between snapping selfies with fellow comic Ali Wong, new father Donald Glover fielded well wishes from various partygoers. “That’s really sweet,” he said. When asked if he was getting any sleep, the “Atlanta” star just shrugged.