Sonic Youth's renaissance woman is taking her artwork to the web. 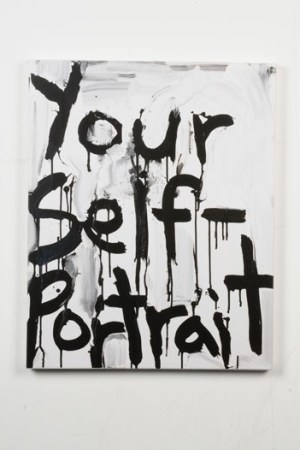 There’s no stopping Kim Gordon, who’s equal parts rock star (literally), fashion muse, fashion designer and artist. Next week, the Sonic Youth chanteuse — who studied at L.A.’s Otis College of Art and Design and wrote for Artforum in the Eighties — is set to unveil two new paintings exclusive to art retail site Exhibition A (co-founded by Cynthia Rowley, Bill Powers and Laura Martin), which is selling 50 limited-edition prints of each starting Wednesday. Named “Your Self-Portrait” and “Larry Gagosian,” the works feature Gordon’s signature paint-splattered writing, similar to “The Noise Painting” series she exhibited at New York’s John McWhinnie @ Glenn Horowitz Bookseller and Art Gallery last summer. Back then, WWD visited her at her Northampton, Mass., home, to dish art and fashion. Almost a year later, we’re catching up with the multihyphenate Gordon again. On the agenda this time: more art and more fashion — and, of course, Gagosian.

WWD: What’s the backstory to “Your Self-Portrait?”
Kim Gordon: Bad Warhol-style Pop Art. I wanted to do something that related to the idea behind Exhibition A — affordable art for people that has interesting ideas. It’s the notion of an affordable commission for a self-portrait.

WWD: And the Gagosian piece?
K.G.: I was thinking of the dealer or gallery persona surpassing that of the artist, the idea of brand name over product [and] not being able to differentiate between them. Perfume is the ultimate version of that because it’s so celebrity name-brand driven. People wanting to buy a piece of work from a particular dealer the way consumers like to buy from a certain store — it gives them confidence.

WWD: Do you know him personally?
K.G.: Before Larry had a career as an art dealer, he had this business selling prints, these mass-produced, pretty schlocky prints. My friend and I worked for him, framing them. This was in Los Angeles in early 1971. We framed hundreds in a day. And then when I moved to New York, Larry had a gallery with Annina Nosei, though they couldn’t have it open to the public because it was in some co-op on West Broadway. I worked for Annina basically — I think this was in 1980, before she started showing Jean-Michel Basquiat — and was supposed to be the receptionist, although I didn’t know how to type. That’s where I met Richard Prince. He brought in his watch photos and they were in these metal frames that I was very familiar with. I sort of gave him a hard time, jokingly, about them.

WWD: Have you done similar paintings of other gallerists?
K.G.: Yes, it’s part of a series. There’s also a Barbara Gladstone and a Reena Spaulings. But I don’t have any thoughts right now about doing a huge collection. Though if somebody wants me to do one for them, I’ll do it.

WWD: You’ve done word paintings based on song lyrics, names of underground noise bands and random phrases, but is this your first time doing people?
K.G.: I did a Raymond Pettibon one a couple of years ago — that was the first. We met a long time ago in L.A. He was just kind of around the scene. His brother is Greg Ginn [of the band Black Flag] and he would use Raymond’s drawings for the album covers. I think I was actually the first person to write about his work in Artforum, because until then nobody knew who he was except around the L.A. punk scene.

WWD: Last time you told me you hated your handwriting. Have you changed your mind now that you’re making art out of it?
K.G.: When I’m writing in a normal way, I think it’s bad handwriting. But if I have enough distance from something, it doesn’t bother me. It’s the same with my voice sometimes. If I hear something I did a really long time ago, there’s enough distance from it that it doesn’t bother me. But there is a trap in doing handwriting that is kind of irregular. I need to find more ways to continue it being irregular without making it too mannered or stylized.

WWD: What was the last art show you saw?
K.G.: I saw the John Knight exhibit at the Greene Naftali Gallery. He’s somebody who was a big influence on my work. His work is very in situ, influenced by the context of the gallery. You know, I’m doing these paintings, but it’s not like I see myself as a painter. I want to go back to doing more installation work.

WWD: Any upcoming installations then?
K.G.: I’m reviving an art project I did in the early Eighties called “Design Office.” [The work] takes on the role of interior decorator-psychologist to create an in-situ intervention with a space-client or gallerist. I’m really interested in the psychological aspect of space and the relationship between gallerist and artist and that sort of thing.

WWD: Where and when is this happening?
K.G.: I can’t really say right now. There’s this space uptown that I’m interested in, but I don’t want to name.

WWD: Any news on the fashion front?
K.G.: I have a small collaboration with Surface to Air that comes out next spring. It’s going to be about five or six pieces.

WWD: Since you’re so tied to the fashion and art worlds, what are your thoughts on the recent talk about fashion not belonging in museums?
K.G.: It just depends on the nature of the show. I mean, designers like [Kate and Laura Mulleavy of] Rodarte, I would say yes, they could be in a museum. And, I mean, museums always want to bring people in and do crowd-pleasing shows. In some ways, I don’t see why fashion would be any different than some of the shows they do already. I kind of feel like fashion is taking over everything anyways. It just depends on what and how interesting the ideas are.