The duo got their first push from a widely broadcast and tuneful Amazon Kindle commercial. 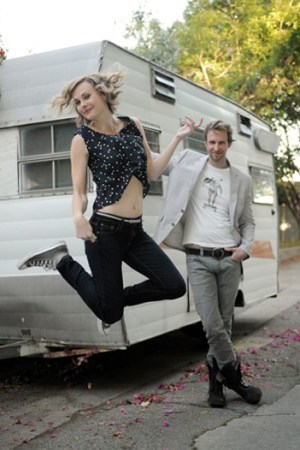 “We would have done it earlier, honestly, if we had known it would work out so well,” says Marcus Ashley, one half of Los Angeles-based musical duo Little & Ashley.

Thanks to a contest that ended up as the widely broadcast and tuneful Amazon Kindle commercial, Ashley and his female counterpart, Annie Little, got the push they needed to join forces.

Last summer, Little was asked by her friend, photographer-director Angela Kohler, and partner Ithyle Griffiths to appear in a short for the contest, which was shot within a seven-hour day. With Annie’s acting and modeling experience, it was simple for her to portray an Amelia Earhart-esque aviator, evoke Davy Crockett in a coon-tail cap and become a mustached magician who conjures up a bunny eared Kindle from her top hat. The real trick was getting her music to accompany the 30-second stop-motion commercial.

“We didn’t have any music at that point,” says Little. “They asked me if I knew anybody that would be interested.”

Kohler only knew about Little’s day job, having met her on a Shade clothing shoot in 2008. “I was a music major at University of Utah and I grew up playing piano,” she recalls.

But it was modeling that whisked her away from home at 19, eventually signing with Ford Models.

“As a longshot, I sent them the lyrics I had in mind,” she says.

Kohler and Griffiths loved what she wrote, so Little asked her musician-actor boyfriend, Ashley, to join the project producing and collaborating on the song “Fly Me Away.”

“Certainly at that point, no one had any idea that anything was going to come of it,” says Ashley.

The commercial was a hit, winning the Audience and Amazon Jury Prize and started airing last fall.

“We built the full-length version, of course, at the same time. We thought it turned out kind of cool,” says Ashley.

By the time Kohler and Griffiths were ready to direct the second Kindle commercial, Little and Ashley had written “Stole My Heart” to accompany it, another whimsical stop-motion, character-filled spot featuring Little and an equally adorable fellow. The commercial started airing earlier this year followed by Little & Ashley’s debut four-song EP titled “Stole My Heart,” released in March exclusively on Amazon.com.

The twosome will continue to provide music for the Kindle commercials as per their extended agreement, with their perfect chemistry of Little on vocals and keyboard and Ashley on drums, bass and guitar, along with vocals. They are also working on their second EP to be released early fall with hopes of a follow up full-length debut late this year.

“We have a period of exclusivity with Amazon because the songs are in the commercials, but once that period is over we will release everywhere we can,” explains Little.

But as far as Little appearing in the third spot in the series, “I’m not in the next one,” she says, but “they auditioned Marcus to keep him in mind for the future.”

Considering Ashley has over 50 U.S. and European commercials under his belt, including Volkswagon, Heineken, Levi’s, Coca-Cola, Samsung and Kodak, and has appeared on several TV shows, including “CSI NY,” “Bones” and “Ghost Whisper,” chances are good.

“I always looked at that as my day job and have been recording steadily over the past number of years,” says Ashley.

Like Little, he grew up playing music and was part of a jazz combo at Boston University, where he studied film. He was also in a number of Los Angeles bands before starting his solo project a few years ago under the name American Weapon, where he self-released two albums.

Although Little won’t be in the third installment, she has plenty of modeling and acting gigs to keep her busy. Last year, she was on the season premiere of “Mad Men” playing a stewardess.

“I did not have an affair with Don Draper,” she clarifies, referring to the fact that she is often misidentified as the other stewardess in the scene played by Sunny Mabrey, who has a one-night stand with Draper.

She was also on the cover of the Nicole Miller cosmetics catalogue and starred in a long-running print and commercial campaign for Hershey’s Bliss.

“I have a couple of modeling jobs coming up,” she says. “I think both Marcus and I have really strong work ethics and, while things have started to develop with our music, I think we’re both really happy to have work.”