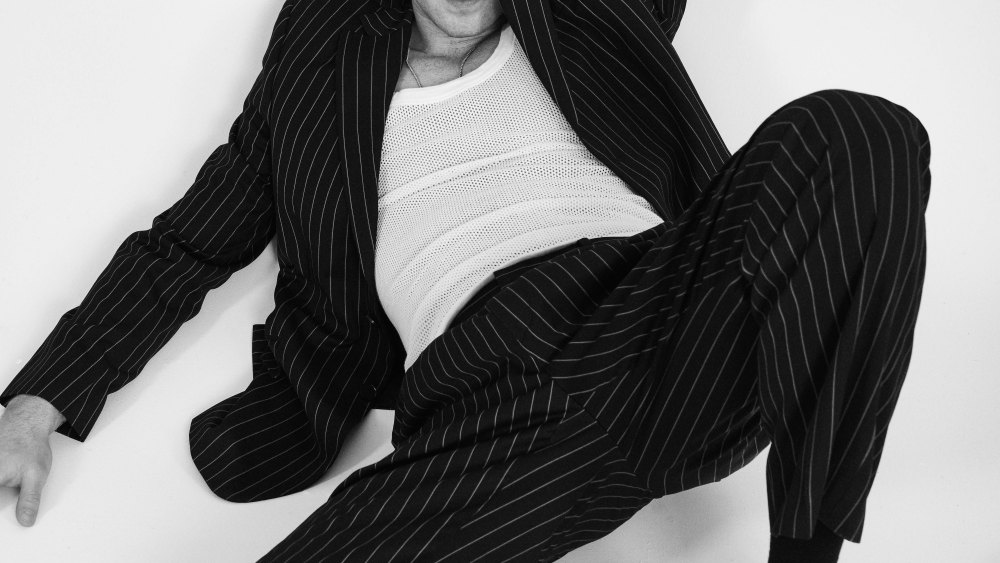 There are adrenaline rushes, and then there are the effects one can of Red Bull has on KJ Apa. He’s been on set for all of three minutes before bursting into a handstand unprompted (it wouldn’t be his last handstand of the day), then moving on to examine a rack of clothes, for which he readily strips down in the middle of the studio (we’ve maybe clocked in at five minutes now).

He whizzes through outfit changes, wondering what stunt he should attempt next. Should he balance on top of a rickety stool? Should he try to hang from a pipe on the ceiling? Should he fake-fall face forward? (One has to wonder what he’s like sans Red Bull — the inkling is much the same.)

There’s a speed to everything the New Zealand native does, but not an urgency. He has a laid-back energy that is stereotypical of Kiwis, yet at the age of 22 Apa has gone from relative unknown to mega recognition, after being plucked some four years ago for the role of Archie Andrews in the CW’s wildly popular “Riverdale.”

Now in its fourth season (with a fifth greenlit, though “Riverdale” was one of the first sets to be shut down due to the coronavirus pandemic), the show has started opening doors into other projects and Apa has begun to branch out, recently leaving behind the broody high schooler for something he deems very outside his comfort zone: a faith-based film depicting the life of a real, living person.

The choice was made with the intention of trying something new, but Apa says signing onto “I Still Believe,” which tells the story of the Christian country singer Jeremy Camp and his first wife’s battle with cancer, was more about letting things take him where they seem destined to go; plans, he’s learned (and continues to learn, as he sits now with life on pause like the rest of us), can be rather useless.

“Every time I try and plan my career out, something comes by that completely throws me off,” Apa says, “like a faith-based movie. Never did I ever, one, want to do a faith-based movie or two, imagine myself doing one. But that made me realize that it’s not about that. It’s about what inspires you. I hope that I can keep having opportunities to do work on projects that I’m inspired by. I feel like, at the end of the day, if you’re doing that, then you’re winning in life.”

The film had just barely made it into theaters before coronavirus shut society down. (The movie has since been made available for digital viewing.) Apa was back in Vancouver working on “Riverdale” when quarantining began; he had planned to take some time off once the season wrapped — “I can’t imagine finishing the show and going into another movie right now,” he said at the time — and settle into the house he recently purchased in Los Angeles. Instead, he’s holed up in Vancouver.

“Unfortunately yes, everything has been put on hold,” he writes from Canada. But he’s welcoming the forced break. “I think it’s a great opportunity to force myself to rest and unwind from a long season.”

He’s passing the time with music, writing and playing with a band he’s in called The Rumble Fish. The group put out three songs in early March, and it seems productivity continues during quarantine.

“[I’m] hoping to have a lot more music out very soon,” Apa writes.

Music has grown to be his escape from the chaos of the acting world, and though the group is putting out songs, he is hesitant to name it anything other than a passion.

“Music is still a really fun thing for me, and I use it as a way to get away from all this stuff,” he says. “If I were to start doing it for work, maybe it would change — maybe it wouldn’t, because I just love it so much, but I don’t know.”

Music — now what’s keeping him creative during a time of crisis — not long ago almost prevented him from taking the role in “I Still Believe.” Apa, who prefers Led Zeppelin and Boney M to Kenny Chesney and George Strait, has been playing guitar since he was 11, learning off YouTube. But he had no real music training prior to playing a country star in the film (for which he sang and played guitar on the songs himself).

“The music was also one of the things that had me second guessing myself. I don’t see myself as a singer. Even still I don’t. I was scared to sing,” he says. “But I was like, ‘F–k it. I’m just going to do it. I’m going to give it a go.’”

Apa initially turned down the movie, hesitant both to sing and also about the idea of playing a real-life person.

“I knew it needed a tremendous amount of respect, and I don’t know, I kind of doubted myself,” Apa says. “I think I ended up just realizing that the anxiety that I was feeling was good — it meant I cared about the role. I realized how much of a challenge it was going to be and how I’d be completely outside of my comfort zone. Every time I do that, I feel like I might grow from it. So I kind of just pushed myself off the edge.”

Apa grew up in Auckland, New Zealand, and never actively pursued acting — it just sort of happened. His mom enrolled him with a modeling agency when he was 13 in hopes he might get some catalog work for extra money, but three years in he still hadn’t booked anything. Finally, at 16, he got an offer — it was for a part in a TV show, not a photo shoot.

He’s not surprised to find himself living the life he is, though. When he booked that first role, on New Zealand’s longest-running soap opera “Shortland Street,” it felt like the long-awaited beginning of something he knew would always happen had finally started.

“I Still Believe” is the first part he’s been offered without being asked to audition, which many actors would gladly take as a sign of having made it. Instead, it made Apa nervous and doubtful.

“The days leading up to actually shooting, I was like, ‘What if I’m terrible? What if I’m bad?’ Yeah, I was a little intimidated,” he says. “I would rather audition for all my roles — I want to know that I’ve earned it.”

WATCH: Get to Know Pietro Boselli