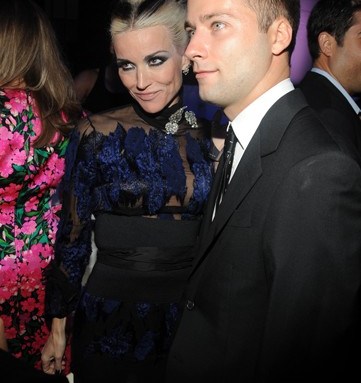 There was the spanking new location, Alice Tully Hall; the first-time host who ribbed the oh-so-serious fashion crowd, Tracey Ullman, and a nod to the next generation with winners like Rodarte’s Kate and Laura Mulleavy for women’s wear, Band of Outsiders’ Scott Sternberg and Calvin Klein Collection’s Italo Zucchelli for men’s wear, and Proenza Schouler’s Jack McCollough and Lazaro Hernandez for accessories.

Where past awards have dragged on, this year’s theater-style ceremony and buffet dinner kept the night mercifully brief, ameliorated by hostess Diane von Furstenberg, the Council of Fashion Designers of America president, who started asking people to take their seats in the auditorium practically the minute they arrived. Ullman echoed her friend’s sentiment.

“Let’s get on with the show,” the comedienne told the crowd in her welcoming remarks. “It’s time, because I can see Kiefer Sutherland flexing the muscles in the back of his neck. Brooke Shields is trying to hold him back, but he’s a strong lad.”

Ullman’s shtick was hit and miss, with the occasional lack of laughs proving again that fashion is one tough crowd. Some of the loudest applause went to her praise for Michelle Obama, who was honored with the Board of Directors’ Special Tribute, but sent her thanks via a taped video. Desirée Rogers, who was scheduled to accept on the First Lady’s behalf, was also a no-show.

Ullman didn’t totally fawn over the First Lady, though. “In the short time her husband has been in office, she has already done a tremendous amount to promote the American fashion designers, especially J. Crew,” Ullman crowed. “Is J. here tonight? Mr. Crew? How about Mrs. Crew? Any of the Crew kids? Oh come on, you’d think that they’d be here tonight to show support for J.”

Ullman also had some thoughts on Marc Jacobs, who took home the International Award for his work at Louis Vuitton, but went empty-handed in the women’s wear and accessories categories. “Every year, no matter what, Marc ends up a winner,” she said. “Something’s not right. He’s the Bernie Madoff of fashion. I think you should have a CFDA permanently tattooed on your arm, Marc.”

And it wouldn’t be 2009 without some commentary on the recession. “The bad news is the Russians have stopped buying,” Ullman offered. “The good news is that that’s mostly bad news for Versace.”

Ralph Lauren, too, had some good news: He took home the CFDA’s first-ever award for popular vote. “Wow, there’s nothing much to say except, I’m going to dance for you now,” Lauren said. “I really thank the public and I guess it was worth 42 years. You finally got the message.”

If there was ever a complaint that previous award ceremonies didn’t feature any live fashion, it was put to rest Monday. In addition to the tower of models dressed in the nominees’ most current collections that greeted guests as they arrived, there were live presentations for Geoffrey Beene Lifetime Achievement Award recipient Anna Sui and the Womenswear Designer of the Year nominees. Sui, true to her runway, recruited catwalkers Sasha Pivovarova, Coco Rocha and Agyness Deyn, while fellow Detroit native Jack White presented her with the honor.

“We’re both obsessed with the beauty and inspiration of music, and we’re both, I think, inspired by multiple eras,” the White Stripes front man said, going on to give his definition of Sui’s timeless fashion: “It’s not emulation or re-creation or even false modernity. It is a beauty that can exist in any era — past, present, or future — and not suffer the wrath of novelty or fad.”

The videos for the nominees had their moments, with Eleanor Lambert Award winner Jim Moore of GQ recruiting a star-studded cast that included Jake Gyllenhaal and Tom Cruise for his; Graydon Carter spoofing Vanity Fair’s Proust Questionnaire with various nominees, and Jacobs and LVMH chief Bernard Arnault trading compliments until Jacobs drew one of the biggest laughs of the night. Of Arnault he said: “You don’t get overpraised, but he’s like the farmer in that pig movie [“Babe”], and sometimes you’ll get a ‘That’ll do, pig.’”

Unfortunately, the evening’s winners had trouble e-mailing, texting or Twittering their good news due to the poor reception in the theater. So after winning Womenswear Designer of the Year, Laura Mulleavy went out to the lobby to call her mom. “She said she knew we would win,” Mulleavy said. “But she also thinks she’s psychic.”

Across town, Nicolas Cage, Audrey Marnay, Irina Lazareanu and Michelle Hicks gathered at Rose Bar to help Sui celebrate her prize. Meanwhile, the Mulleavys partied with Kirsten Dunst, McCollough and Hernandez, Daphne Guinness, Thakoon Panichgul, Alexander Wang and Dree Hemingway under the disco ball at The Ballroom at the Jane Hotel. Opening Ceremony and Black Frame hosted the bash at the new hot spot, which lasted well into the wee hours.

After the CFDA ceremony and a buffet dinner that went more or less untouched, Francisco Costa, Italo Zucchelli, Carey Mulligan, Donna Karan, Molly Sims and Lake Bell headed down to the High Line, where Calvin Klein Collection hosted a fete in honor of the Friends of the High Line’s opening summer benefit. Calvin Klein menswear designer Italo Zucchelli tied with Band of Outsiders for Menswear Designer of the Year. While some guests took advantage of the well-stocked and well-staffed bar, others plotted ways to get close to Bradley Cooper.