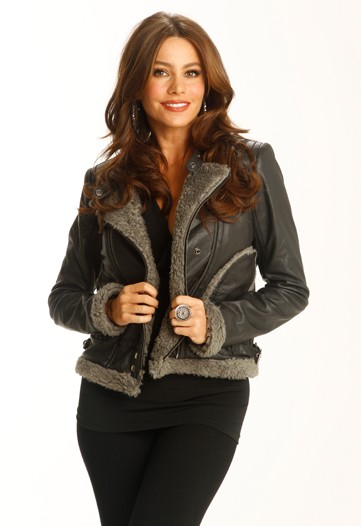 NEW YORK — On a photo shoot at Milk Studios, Sofia Vergara is cupping the front of a tight leopard bustier dress and tugging a little where her assets are emphasized, provocatively adjusting for the camera.

She’s certainly a bombshell with a playful, flirty side to her as well — and she’s bringing it all to Kmart with her first signature fashion collection.

“We’re getting so goooood,” she announces to the crowd of handlers and publicists surrounding her as they pick photos from the shoot for her publicity shots.

Vergara, the 38-year-old star of the hit TV show “Modern Family,” could make a burlap sack look sexy, but in this case, she is modeling miniskirts, jeggings, leopard bustiers, tight dresses and sultry tunics for her upcoming Sofia Vergara for Kmart collection, to be launched for fall.

It’s a daring move for the mass merchant to cater to the younger contemporary crowd with Vergara but, in an interview, she said the collection doesn’t cross the line. “You have to realize that it’s me wearing it. You’ve just seen it on me,” and she’s not your everyday Kmart customer. “All the pieces are very wearable. And we have them in all sizes.”

But she acknowledges the line represents Kmart stepping out. “We’re trying to fill a hole in the store. They wanted to appeal to a younger woman with something a little spicy. The times are changing,” she said.

“It’s one of the things I always wanted to do, but this was the best time for me to look for a deal,” with her acting career on an upward trajectory. She has roles in Columbia Pictures’ “The Smurfs,” Warner Bros’ “Happy Feet 2 in 3D” and New Line Cinema’s “New Year’s Eve,” and has been named as one of the most talented and powerful women in Hispanic entertainment today by The Hollywood Reporter and Billboard. She’s the only Hispanic actress to begin a career on a U.S. Hispanic network and successfully cross over to the general market. The New York Times said she’s one of this year’s “faces to watch” and she was nominated for a Golden Globe, an Emmy and a Screen Actors Guild award for “Modern Family.”

Kmart and LF USA, a subsidiary of Hong Kong-based Li & Fung Ltd., and Latin World Entertainment Licensing will today unveil the launch of the lifestyle collection by Vergara. She is a founding partner with Luis Balaguer of Latin World Entertainment, a company serving the U.S. Hispanic market and involved in publicity, licensing, endorsements, brand integration, production and content development.

“It’s comfortable and chic, affordable, and versatile to wear from day to the night. It’s fantastic because you can mix and match,” Vergara observed. She suggested a pair of her Kmart leggings, and with something fairly high end, perhaps a designer jacket. “It doesn’t matter,” she said.

Considering her looks and hip personality, Vergara could have opted for something more upscale. But she said it had to be Kmart. “This is not a new store for me. When you have kids you don’t go to Bergdorf Goodman to buy underwear and socks. You go to Kmart.” She also said she wanted Kmart because it has a large Latino clientele.

Asked what she likes best in the collection, which is actually inspired by items in her own closet, Vergara said, “I love the dresses, especially because Kmart doesn’t really have that kind of merchandise. There is no dress department. I also love the miniskirts most.”

Officials said Vergara signed a long-term contract but didn’t specify the terms. “This is kind of natural for me,” Vergara said. “I have always been interested in clothes and makeup and beauty. I always dressed up. I wasn’t laid-back about it. I’m not lounging around in sweat clothes and flip-flops. Maybe a nice pair of sweats.”

According to John Goodman, executive vice president of apparel and home for Sears Holdings Corp., which operates Kmart, the tie-up with Vergara represents Kmart’s efforts “to gain more relevance in a younger audience, especially around contemporary fashion.…We have built a junior business,” with such labels as Dream Out Loud by Selena Gomez and Bongo. “We think Sofia has a great way about her. She’s beautiful. She has a specific style and she truly represents the modern woman.”

“There are great dresses, great jeggings, some oversize tops, some tanks, denim will be part of the line,” Goodman continued. “It will be casual, not dressy, it goes from day into evening, and it’s a little bit more fitted. Some pieces are more curvy. We don’t go too far. We go with what Sofia is comfortable with. We want to make sure her image comes alive. She is working very closely with Regatta [a division of LF USA], with the designers, with our merchants. There is no question she has a big following in the Latino community and Kmart has a strong Latino segment to our customer base, which is very diverse. But she also brings a mainstream appeal.”

“I am very involved, in the designs, in the colors, and the materials. I have final say,” Vergara added.

The collection will be sold in about 800 Kmart stores starting in late August and early September, and occupy between 500 and 750 square feet per door. Other key contemporary labels at Kmart include Route 66 and Attention.

Asked if the collection could be risqué for Kmart, Rick Darling, president of LF USA, replied, “I don’t think so at all. We spent a lot of time talking with her. We think she’s perfect. We don’t see her as risqué at all — just a lot of fun with a wonderful attitude, solid fashion sense and flair, and with a sound business side.”