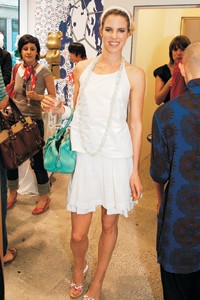 Waris (his usual single-name moniker) is known for his dagger and skull designs and knuckle-duster rings, and works exclusively in gold and silver. He wouldn’t have it any other way. “Empires have been built — and destroyed — on those metals. Look at the Crusades,” mused the actor-cum-designer, who works in Italy, India and New York.

After the cocktail party wound down, the bearded, turbaned Waris and his buddies slunk off to Annabel’s to help their old friend Farhad Farman Farmaian celebrate his birthday. During dinner — and before the Italian waiters belted out “Happy Birthday” — the well-oiled guests, including Pia Getty, Kadee Robbins, Rena Sindi, Joana Schliemann, Karen Groos and Nicole Hambro, grabbed the tambourines and maracas from the live band and started dancing between the tables. “It was a tight squeeze — but it was a blast,” said the birthday boy.

Back in New York that night, things were a bit tamer as the young set took over the New York Public Library for the annual Young Lions Fiction Award Party, where Ethan Hawke welcomed guests, but disappeared before dinner. Thanks to the Twenties theme, many a short beaded frock, jeweled headband and feathered fan appeared in Astor Hall, which just days before had seen some of the same faces for the CFDA Awards. And once again, the overheated crowd took frequent breaks on the building’s front steps — albeit, with some restrictions. “They told me I couldn’t bring my wine outside,” said Tinsley Mortimer, who was hovering near the doorway, “so I had to choose between my drink and fresh air — and the drink won.”

The evening before, gusting winds and a downpour did little to dent the opening party of the M Missoni store. “It’s more crowded than a subway car at rush hour,” marvelled one attendee. “Oh, look,” said Thelma Golden, “there’s Richard Meier. How exciting is that?” Others braving the rain included Margherita Missoni (of course), Damon Dash and Rachel Roy and Alexandra Richards, all of whom trickled over to the after party in a tented garden and chicly dilapidated sculpture gallery on Elizabeth Street. Guests munched on tomato and mozzarella, young Margherita boogied to old Michael Jackson, and at one point, the police showed up because the neighbors complained about the noise.